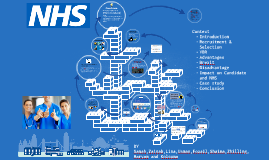 Transcript: Disadvantages Values Based Recruitment Framework Caters to 54.3 Million people How would Brexit have an impact on the recruitment processes of national health service? - 60,000 people from EU countries working within the NHS (Kings Fund, 2017). - 10,000 EU health workers have quit NHS since Brexit vote. - The NHS has 40,000 nursing vacancies available. Advantages 2. E-recruitment • Ahri.com.au. (2018). Recruitment and Selection. [online] Available at: https://www.ahri.com.au/assist/recruitment-and-selection [Accessed 11 Feb. 2018]. • Anon, (2016). About the National Health Service (NHS). [online] Available at: https://www.nhs.uk/NHSEngland/thenhs/about/Pages/overview.aspx [Accessed 26 Feb. 2018]. • Anon, (2016). MP: Severe nursing staff shortage at Netaji Subash Chandra Bose Medical College. [online] Available at: https://education.medicaldialogues.in/mp-severe-nursing-staff-shortage-at-netaji-subash-chandra-bose-medical-college/ [Accessed 25 Feb. 2018]. • Anon, (2017). What is the NHS?. [online] Available at: https://fullfact.org/health/what-is-the-nhs/ [Accessed 26 Feb. 2018]. • Anon, (n.d.). [ebook] Available at: http://www.jobs.nhs.uk/cgi-bin/doc_viewer.cgi?type=jpd&id=6787 [Accessed 16 Feb. 2018]. • Carroll, L. and Campbell, D. (2018). Almost 10,000 EU health workers have quit NHS since Brexit vote. [online] the Guardian. Available at: https://www.theguardian.com/society/2017/sep/21/almost-10000-eu-health-workers-have-quit-the-nhs-since-brexit-vote [Accessed 28 Feb. 2018]. • Making sense of the issues infographic. (2018). [ebook] Available at: http://www.nhsconfed.org/-/media/Confederation/Files/EU-Office/Making-sense-of-the-issues-infographic.pdf [Accessed 25 Feb. 2018]. • Manufacturing - Low, low wages – the dirty secret of “Made in Europe”. (2014). [Blog] Available at: http://www.aplf.com/en-us/leather-fashion-news-and-blog/news/19788/manufacturing-low-low-wages-the-dirty-secret-of-made-in-europe [Accessed 24 Feb. 2018]. • The King's Fund. (2018). What impact will Brexit have on the health and social care workforce?. [online] Available at: https://www.kingsfund.org.uk/publications/articles/big-election-questions-brexit-workforce [Accessed 28 Feb. 2018]. • Values Based Recruitment Framework. (2016). [ebook] pp.5-95. Available at: https://www.hee.nhs.uk/sites/default/files/documents/VBR_Framework%20March%202016.pdf [Accessed 27 Feb. 2018]. 3. External Advert The main internal factor that influences the NHS is Government policies on reservations. Values Based Recruitment (VBR) is an approach which attracts and selects students, trainees or employees on individual values and behaviours. Public Funded NHS Staff BY Sanah,Zainab,Lina,Usman,Fozail,Shaima,Zhilling,Maryam and Kolsuma 1 Million people every 36 hours REFERENCES The Shrewsbury and Telford Hospital NHS Trust Recruitment & Selection Situational Judgement Tests are designed to assess a candidate’s judgement regarding work-relevant situations. Launching a marketing campaign Digital agency launched Very popular on Facebook as the campaign has over 11,000 likes. Encouraged potential employees to apply for the vacancies and therefore be part of the #Belongtosomething campaign Previous experience is essential; saving money and time 27 days per annum increasing to 29 days after 5 years NHS service and 33 days after 10 years NHS service. NHS staff are paid according to a complex NHS pay scale system Context Introduction Recruitment & Selection VBR Advantages Brexit Disadvantage Impact on Candidate and NHS Case study Conclusion Selection centres, also known as assessment centres, are selection methods involving multiple exercises As technology improves and the population changes, the way in which we train our future workforce may change. To reduce the time it takes to hire to avoid being short staffed therefore it is vital to find ways to shorten the process. VBR framework – This is the framework that the NHS uses for its recruitment and selection process. Conclusion “I believe some of these traits can only really be revealed through personal interaction. I really feel I’m given more of a chance to reveal my abilities at an interview – at least an interview which is conducted to discuss values and not one testing academic prowess.’’ “Delivering high quality, effective, compassionate care: Developing the right people with the right skills and the right values” – A Mandate from the government to Health Education England NHS Facts • Creating a more positive work environment • Staff feeling more valued • Increased job satisfaction • Increased trainee experience • Reducing agency spend and recruitment cost NHS staff have to work on a on-call rota Many students/candidates did not complete a placement/ gain work experience 1. Internal advert Launched in 1948 BREXIT Impacting factors on candidates and the NHS Employs 1.5 Million people 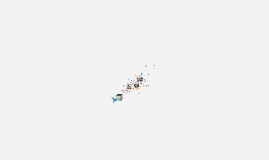 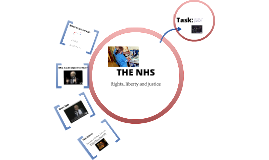 Transcript: What do you know? http://www.nhs.uk/NHSEngland/thenhs/about/Pages/overview.aspx Take the establishment of a free at the point of need health care system. What arguments can be made FOR and AGAINST the establishment of such a system on the basis of RIGHTS, LIBERTY and JUSTICE? Map these arguments Rights, liberty and justice Task: More Milt THE NHS Who Could Object To That? http://www.guardian.co.uk/world/2009/may/13/advertising-campaign-nhs-us-healthcare-reforms The Issues http://news.sky.com/home/politics/article/15361262 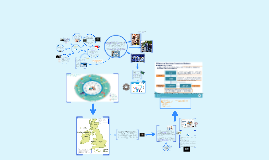 Transcript: In your opinion, what would you say were the most significant moments in the history of the Italian Health Service? the NHS includes: National Health Service (England) Health and Social Care in Northern Ireland NHS Scotland NHS Wales key roles of CCGs General practitioners (GPs) work in primary care and are part of a clinical commissioning group (CCG) which have responsibility for purchasing healthcare from secondary healthcare providers, such as acute/hospital and community/mental health trusts and the independent and voluntary sector. Changes to the healthcare system in England means that the NHS will need more GPs in the future and the number of training places is increasing. It is anticipated that up to 50% of all specialty training places in the future will be in general practice. Isle of Man & Channel Islands have their own, independent Health Services. 1998 National Health Service after 2010 CCGs work with closely with NHS England, who has three roles in relation to CCGs. 1. Assurance: NHS England has a responsibility to assure themselves that CCGs are fit for purpose, and are improving health outcomes. 2. NHS England must help support the development of CCGs. 3. NHS England are also direct commissioners, responsible for highly specialised services and primary care. As co-commissioners, CCGs work with NHS England’s Local Area Teams to ensure joined-up care. 1948 General practice July 5 1948 – The NHS is born When health secretary Aneurin Bevan opens Park Hospital in Manchester it is the climax of a hugely ambitious plan to bring good healthcare to all. For the first time, hospitals, doctors, nurses, pharmacists, opticians and dentists are brought together under one umbrella organisation to provide services that are free for all at the point of delivery. The central principles are clear: the health service will be available to all and financed entirely from taxation, which means that people pay into it according to their means. they have a legal duty to support quality improvement in general practice. This second role has received less attention to date, but is vitally important if CCGs are to achieve their wider objectives and deliver more integrated forms of care. CCGs have two important, but distinct, roles: 1. they are responsible for commissioning secondary and community care services for their local populations. From what you have learnt so far, in your opinion, what are the main differences between the British and Italian National health services? what is different in terms of administration finance erogation of services All services are often referred to as "the NHS", although only the English NHS is officially called the "National Health Service" 1986 – first AIDS health campaign. After a number of high-profile deaths, the AIDS advertising campaign sets out to shock, using images of tombstones and icebergs. It was followed early in 1987 by a household leaflet carrying the slogan "Don't die of ignorance". This campaign was in line with the original NHS intention to improve health and prevent disease, as well as offer treatment. Watch the original TV ad 'The Aids Monolith' on the National Archives website. Read more information about AIDS and HIV. pubblicità progresso Italia fine anni 80 1987 – heart, lung and liver transplant Professor Sir Roy Calne and Professor John Wallwork carry out the world's first liver, heart and lung transplant at Papworth Hospital in Cambridge. Professor Calne describes the patient as "plucky" and she survives for a further 10 years after the procedure. Her healthy heart is donated to another transplant patient. http://www.salute.gov.it/portale/salute/p1_3.jsp?tema=Tu_e_il_Servizio_Sanitario_Nazionale 1960s The NHS is undergoing major changes in its core structure. The new health and care system became fully operational on April 1 2013. It delivers the ambitions set out in the Health and Social Care Act. Public Health England, the NHS Trust Development Authority Health Education England took on their full range of responsibilities at the same time. NHS England is an independent body, separated from the government. Its main aim is to improve health outcomes for people in England. It will do this by creating the culture and conditions for health and care services and staff to deliver the highest standard of care and ensure valuable public resources are used effectively to get the best outcomes for individuals, communities, and society now and for future generations. Locally, clinical commissioning groups, made up of doctors, nurses and other health professionals, buy services for patients, while local councils formally took on their new roles in promoting public health. Health and wellbeing boards bring together local organisations to work in partnership and Healthwatch England provides a powerful voice for patients and local communities. 1950s 1990s CCGs history and key facts This service will go on to become one of the largest single e-health services in the world, 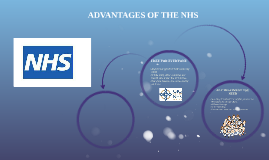 Transcript: ANY TREATMENT YOU NEED You can get treatment for anything from minor illnesses to major operations All free of charge Very reassuring Doctors are always available to treat you Anyone can get the health care they need Unlike many other countries our health care under the NHS is free. Everyone receives the same quality and care ADVANTAGES OF THE NHS FREE FOR EVERYONE 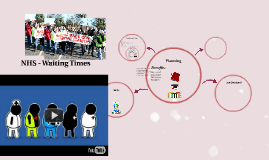