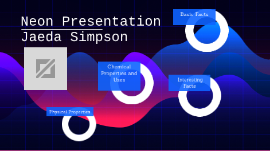 Transcript: Neon Presentation Jaeda Simpson Element Name and Symbol: Name: Neon Symbol: Ne Basic Facts Element Family Noble Gases Atomic Number 10 Atomic Mass 20 Interesting Facts Interesting Facts When, Where, and How was it discovered? When was it discovered? When? Neon was discovered in 1898. Who Discovered It? Who? Neon was discovered by Scottish chemist, Sir William Ramsey and English chemist, Morris Travers. Why is it named that? Why? Neon's name comes from the greek word "neos", meaning "new" Neon can be found in 2 places, the Earth's crust and the Earth's atmosphere. It is considered a very rare element and it can also be produced from a process called distillation. Where is it typically found in the world? Where? Physical Properties Physical Properties What does Neon look like: Neon, under its normal conditions is a very light, inert gas. When it glows it gives off a reddish-orange color. Metal, Metalloid, or Non metal? Metal Non-Metal Metalloid Neon is a non metal. Melting & Boiling Point Melting & Boiling Point Melting Point: -248. 57 C Boiling Point: -246.0 C CONVERSION Solid, Liquid, Gas? This gas is colorless and odorless Neon is a monatomic gas. Density & Hardness Density & Hardness Density: 0.0009 g/cm cubed Hardness: Neon is not hard because it is a gas. 3 uses for this element: Brightly lit signs Television tubes Refrigerant when in liquid form How is it beneficial? Neon produces a very vibrant light that has been used for many signs. Such as when a store needs to let people know if they're open or closed they purchase those signs. I think it is very beneficial to our society. Names for 3 common compounds : Fluorine, NeAr, NeH Is my element important: Yes, I think Neon is one of the most important elements. Neon is also used as a refrigerant which is a chemical used for air conditioning. I think every human needs an air conditioning and Neon is a component of allowing us to have it. Chemical Properties and Uses 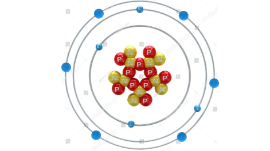 Transcript: When energy hits electrons, the elctron will jump levels appropriate to the amount of energy absorbed. This sends the electron in an excited state and offsets the electron configuration. When the electron leaves it's excited state, it will lower and emit the energy it absorbed, normally emiting photons which result in colour. Why do electrons jump between levels and what happens when it goes back? The larger the jump, the more energy it absorbs and emits, the smaller the wavelength. In other words, a smaller jump will emit infrared, a medium jump makes visible colour, and a big jump makes ultraviolet photons. The length of jump for infrared light, visible light, and ultraviolet light. Wavelength(λ)-->Frequency(v) Frequency is the number of wavelengths that occur in a period of time. c=λv Wavelength(λ)-->Energy(E) The smaller the wavelength the more energy it took to make it. v=c/λ-->E=hv Frequency(v)-->Energy(E) The higher the frequency the higher the amount of energy used is. E=hv h=Plank's Constant≈6.63x10^-34Js c=Speed of Light≈3.00X10^8 m/s Relationships Credit: https://slideplayer.com/slide/10093872/ Photoelectron Spectroscopy Unabreviated: Ne-10-1s2 2s2 2p6 Abreviated: Ne-10-[He] 2s2 2p6 Electron Affinity: 0 1st Ionization Energy: 2081 2nd Ionization Energy: 3952.3 Elecronegativity: None Element Information All parts (ionization energies, electronegativity, and electron affinity) increase throughout the table from left to right and from top to bottom, excluding the several anomalies. Trends Throughout the Periodic Table? 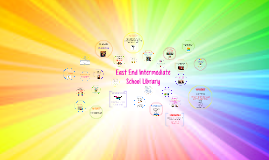 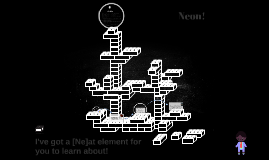 Transcript: Presentaion - Khori Broadway Background - Prezi.com Project Idea - Mrs. Meisenheimer Sources - http://www.chemicalelements.com/elements/ne.html - https://www.webelements.com/neon/compounds.html -http://www.rsc.org/periodic-table/element/10/neon Extra Facts About Neon Most neon compounds are considered to not exist, but recently, there have been evidence, specifically the ions NeAr+ NeH+, HeNe+ and Ne+ have been discovered in optical and mass spectometric studies. However there is no known use for the compounds yet. Neon was discovered in 1898 in London, England, by Sir William Ramsey by working with liquid air. Today it can be used to glow orange in a linear tube, to create neon lights, can be used for refrigeration purposes, and being the most intense on standard electrical currents. Atomic Symbol [Ne] The history of Neon Neon is non-toxic and has no biological role yet. Neon has a boiling point of about -415 degrees farenheit and a melting point of -410 degrees farenheit Neon is the 4th most abundant gas in the universe, but there is only 0.0018% in Earth's atmosphere Neon has a cubic crystal structure Neon may glow orange in linear tube, but it is in fact collorless and odorless. Compounds Containing Neon I've got a [Ne]at element for you to learn about! Credits Neon! Basic facts about Neon atomic number = 10 VE = 8 add logo here 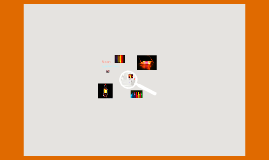 Transcript: Tada!! Neon is obtained from the liquefaction and separation of air. It takes 88,000 lbs of liquefied air just to get 1 lb of neon. Rare on Earth due to its relative lightness, high vapor pressure at low temperatures, and chemical inertness, all properties which keep it from being trapped Narrowest liquid range of any element from 24.55 K to 27.05 K History http://www.buzzle.com/articles/interesting-facts-about-neon.html Founding director of Indian Institute of Science in Bangalore Neon gas in a light, can last for 15 years, without going off. Appointed professor of chemistry at the University College of Bristol in 1879 Neon gas and liquid neon are relatively expensive due to rarity of neon In 1902, Georges Claude's company, Air Liquide was producing industrial quantities of neon as a byproduct of his air liquefaction business. By December 1910, Claude demonstrated modern neon lighting based on a sealed tube of neon. Claude tried briefly to get neon tubes to be used for indoor lighting, due to their intensity, but failed, as homeowners rejected neon light sources due to their color. Finally, in 1912, Claude's associate began selling neon discharge tubes as advertising signs where they were instantly more successful as eye catchers. Liquefied neon is commercially used as a cryogenic refrigerant Neon is the fifth most abundant chemical element in the universe by mass, after hydrogen, oxygen, carbon, and helium Neon http://en.wikipedia.org/wiki/Fractional_distillation Used in vacuum tubes, high-voltage indicators, lightning arrestors, wave meter tubes, television tubes, and helium-neon lasers Often used in signs because it produces a bright reddish-orange light. Although still referred to as "neon", all other noble gases are used to generate many colors of fluorescent lightning How Neon is isolated/produced Scottish chemist who discovered the noble gases and received the Nobel Prize in Chemistry in 1904 Married Margaret Buchanan in 1881 About 0.0018 percent of the Earth's atmosphere is Neon. First "p" noble gas. No neutral compounds of neon are known. However, Ne+, (NeAr)+, (NeH)+, and (HeNe+) have been observed from optical and mass spectrometric studies. Died in High Sycombe, Buckinghamshire, on 23 July 1916 at the age of 63 due to nasal cancer http://en.wikipedia.org/wiki/Morris_Travers By Michael Wang In 1885-1890, Ramsay published notable papers on the oides of nitrogen and developed the skills that he would later utilize for his subsequent work Properties/Characteristics Uses Fractional distillation is the separation of a mixture into its component parts, or fractions, such as in separating chemical compounds by their boiling point by heating them to a temperature at which one or more fractions of the compound will vaporize http://www.chemicool.com/elements/neon.html If you could gather all the neon from the rooms in a typical new home in the United States you would get 10 liters of gas Worked with William Ramsay in the discovery of Xenon, Neon, and Krypton Neon played a role in the basic understanding of the nature of atoms in 1913, when J.J. Thomson, as part of his exploration into the composition of canal rays, channeled streams of neon ions through a magnetic and an electric field and measured their deflection by placing a photographic plate in their path. Thomson eventually concluded that some of the atoms in the neon gas were of higher mass than the rest. Though not understood at the time by Thomson, this was the first discovery of isotopes of stable atoms. This discovery was made by using a mass spectrometer. http://en.wikipedia.org/wiki/Neon Neon was discovered by British chemists Sir William Ramsay (1852-1916) and Morris W. Travers (1872-1961). Discovered when Ramsay chilled a sample of air until it became a liquid, then warmed the liquid and captured the gases as they boiled off. The gases were nitrogen, oxygen, and argon had been identified, but the remaining gases were isolated in their order of abundance in a six-week period beginning at the end of May 1898. First to be identified was Krypton. The next, after Krypton had been removed, was a gas which gave a brilliant red light under spectroscopic discharge. This gas, identified in June 1898, was named Neon, the Greek analogue of "novum" (new), the name that Ramsay's son suggested. The characteristic red-orange color that is emitted by gaseous neon when excited electrically was noted immediately; Travers later wrote, "the blaze of crimson light from the tube told its own story and was a sight to dwell upon and never forget." Later on, Ramsay and Travers discovered Xenon by the same process in July 1898. Stories/More History Part 2 Interesting Facts Neon is commercially extracted by the fractional distillation of liquid air Colorless, odorless monatomic gas under standard conditions http://en.wikipedia.org/wiki/William_Ramsay Nomenclature: Ne Atomic Number: 10 Periodic Table Family: Noble Gases Morris William Travers (1872-1961) Continued his 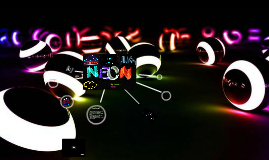 Transcript: Who was William Ramsay ? Neon was discovered by a Scottish chemist named William Ramsay in 1898. Ramsay was a clever chemist. He took a sample of the atmosphere, cooled it and it became a liquid. When he boiled the liquid, he captured the gases and discovered not only neon but the gases xenon and krypton as well. By: Patrick & Daniel Sir William Ramsay - 0.0018% of the atmosphere is neon -Neon has no stable compounds -It is the 5th most common gas in our universe -Neon is non-toxic, no health effects, and no environmental effects - First Neon sign was used in 1912 by a Parisian Barber Fun Facts 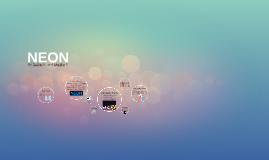 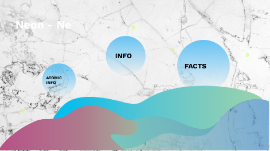