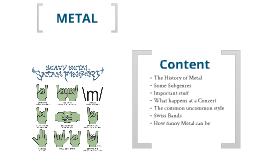 Transcript: METAL The History of Metal Some Subgenres Important stuff What happens at a Concert The common uncommon style Swiss Bands How funny Metal can be Content 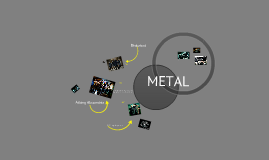 Transcript: METAL Heavy metal is a genre of rock music that developed in the late 1960s and early 1970s, largely in the Midlands of the United Kingdom and in the United States. With roots in blues rock and psychedelic rock, the bands that created heavy metal developed a thick, massive sound, characterized by highly amplified distortion, extended guitar solos, emphatic beats, and overall loudness. Disturbed Disturbed is an American heavy metal band from Chicago, Illinois. The band formed in 1996 when musicians Dan Donegan, Steve "Fuzz" Kmak, and Mike Wengren hired David Draiman as their singer. Since the band's formation, they have sold over 13 million albums worldwide, making them one of the largest grossing metal/rock bands in recent years. The band has released five studio albums, four of which have consecutively debuted at number-one on the Billboard 200. The band went into an indefinite hiatus in October 2011. Asking Alexandria Asking Alexandria are a British metal core band from York, North Yorkshire. Founded in 2008 when Ben Bruce (lead guitar) contacted his old companions upon returning to the UK after residing in Dubai. The current line-up of the group consists of Ben Bruce (lead guitar), Danny Worsnop (vocals), Cameron Liddell (rhythm guitar), Sam Bettley (bass guitar) and James Cassells (drums) Breaking Benjamin Breaking Benjamin is an American rock band from Wilkes-Barre, Pennsylvania, currently consisting of Benjamin Burnley and Chad Szeliga. The band has released four studio albums to date and a greatest hits album that was released on August 16, 2011. The group initially went on indefinite hiatus due to frontman Benjamin Burnley's recurring illnesses and inability to tour in mid-2010. Further complications arose in August 2011, when it was revealed that members Mark Klepaski and Aaron Fink had been fired from the band. Breaking Benjamin has sold over five million albums in the US alone. Slipknot is an American heavy metal band from Des Moines, Iowa. Formed in 1995, the group was founded by percussionist Shawn Crahan and bassist Paul Gray. After several lineup changes in their early days, the band consisted of nine members for the greater part of their tenure: Sid Wilson, Paul Gray, Joey Jordison, Chris Fehn, Jim Root, Craig Jones, Shawn Crahan, Mick Thomson, and Corey Taylor. However, the death of Paul Gray on May 24, 2010, left the band with only eight remaining members. Now give me an "A." Subject 1 Subject 3 Subject 2 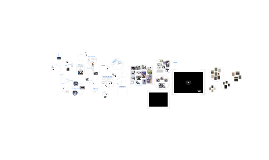 Transcript: IAED 381 PRODUCT DETAILING SPRING SEMESTER 2011-2012 INSTRUCTOR SERPIL ALTAY METAL OUTLINE INTRODUCTION HISTORY THE EXTRUSION PROCESS HOT EXTRUSION COLD EXTRUSION WARM EXTRUSION EQUIPMENTS TYPES OF EXTRUSION DIRECT EXTRUSION INDIRECT EXTRUSION HYDROSTATIC EXTRUSION EXTRUSION DEFECTS THE DRAWING PROCESS DRAWING DEFECTS METAL DESIGN REFERENCES PREPARED BY: ZELAL AYTİN ECE YILDIRIM BERİL NAZ ZIRH EXTRUSION: Extrusion is a process used to create objects of a fixed cross-sectional profile. A material is pushed or drawn through a die of the desired cross-section. TWO MAIN ADVANTAGES OF THIS PROCESS Ability to create very complex cross-sections Work materials that are brittle The material only encounters compressive and shear stresses. Forms finished parts with an excellent surface finish. Extrusion may be continuous (theoretically producing indefinitely long material) or semi-continuous (producing many pieces). The extrusion process can be done with the material hot or cold. In 1797, Joseph Bramah patented the first extrusion process for making lead pipe. It involved preheating the metal and then forcing it through a die via a hand driven plunger. The process wasn't developed until 1820 when Thomas Burr constructed the first hydraulic powered press. At this time the process was called squirting. In 1894, Alexander Dick expanded the extrusion process to copper and brass alloys THE EXTRUSION PROCESS By heating the stock material Loaded into the container in the press Dummy block is placed Presses on the material One of the main advantages of the extrusion process is that this ratio can be very large while still producing quality parts. HOT EXTRUSION Hot working process Done above the material's recrystallization temperature Keep the material from work hardening Make it easier to push the material through the die The extrusion process is generally economical when producing between several kilograms (pounds) and many tons, depending on the material being extruded. There is a crossover point where roll forming becomes more economical. The biggest disadvantage of this process is its cost for machinery and its upkeep. Lack of oxidation Higher strength due to cold working Closer tolerances Good surface finish Fast extrusion speeds if the material is subject to hot shortness It is usually used to achieve the proper balance of required forces, ductility and final extrusion properties 1.Movement of the extrusion with relation to the ram. If the die is held stationary and the ram moves towards it then its called "direct extrusion". If the ram is held stationary and the die moves towards the ram its called "indirect extrusion". 2.The position of the press, either vertical or horizontal. 3.The type of drive, either hydraulic or mechanical. 4.The type of load applied, either conventional (variable) or hydrostatic. It works by placing the billet in a heavy walled container. The billet is pushed through the die by a ram or screw. There is a reusable dummy block between the ram and the billet to keep them separated. The major disadvantage of this process is that the force required to extrude the billet is greater than that needed in the indirect extrusion process because of the frictional forces introduced by the need for the billet to travel the entire length of the container. The billet and container move together while the die is stationary. The die is held in place by a "stem" which has to be longer than the container length. The maximum length of the extrusion is ultimately dictated by the column strength of the stem. Advantages A 25 to 30% reduction of friction, which allows for extruding larger billets, increasing speed, and an increased ability to extrude smaller cross-sections There is less of a tendency for extrusions to crack because there is no heat formed from friction The container liner will last longer due to less wear The billet is used more uniformly so extrusion defects and coarse grained peripherals zones are less likely. Disadvantages Impurities and defects on the surface of the billet affect the surface of the extrusion. These defects ruin the piece if it needs to be anolized or the aesthetics are important. In order to get around this the billets may be wire brushed, machined or chemically cleaned before being used. This process isn't as versatile as direct extrusions because the cross-sectional area is limited by the maximum size of the stem. The billet is completely surrounded by a pressurized liquid, except where the billet contacts the die. The fluid can be pressurized two ways 1.Constant-rate extrusion: A ram or plunger is used to pressurize the fluid inside the container. 2.Constant-pressure extrusion: A pump is used, possibly with a pressure intensifier, to pressurize the fluid, which is then pumped to the container. Advantages No friction between the container and the billet reduces force requirements. This ultimately allows for faster speeds, higher reduction ratios, and lower billet temperatures. 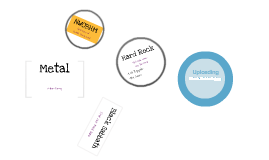 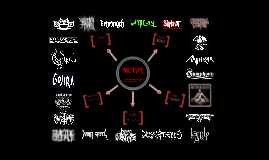 Transcript: Folk Hair Thrash Metal was first introduced in the early 1980's and has been progressing ever since. Metal-Core is one of the newer types of metal with a high to low growl scream vocals and with low tone breakdowns. Death Metal-Core Thrash Metal is one of the eairliest types of metal beginning in the early 1980's. Thrash Metal is defined because of it's accelerating sound with double bass drum pedals and fast chugging riffs. Death Metal has been around since the late 1980's and is the least poplar type of metal. This type of metal is played as fast as you can and can be satanic. METAL Hair Metal is the earliest type of metal and is all about singing abount love and wearing spandex with long hair. Folk Metal is failry new and is about the vikings. Folk Metal is famous in foriegn countries and they dress up as vikings and play galloping riffs. 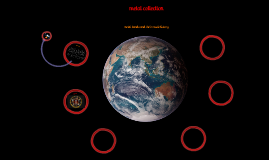 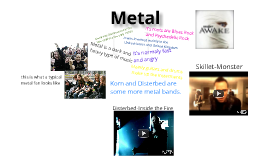 Transcript: It's roots are Blues Rock and Psychedelic Rock It's normaly fast and angry this is what a typical metal fan looks like Metal is a dark and heavy type of music Metal Metal was first invented in the late 1960's to the early 1970's Skillet-Monster Disterbed-Inside the Fire Mainly guitars and drums make up the insterments It was invented mainly in the United States and United Kingdom Korn and Disterbed are some more metal bands.