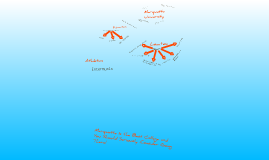 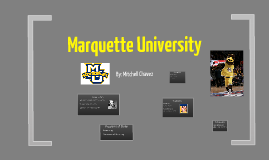 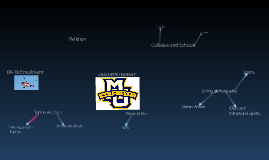 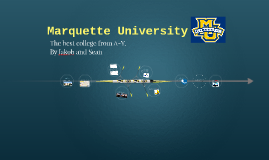 Transcript: Marquette has also gone to the final four three times and has won 1 championship Marquette offers 78 majors with a wide variety of fields. Including Nursing , Engineering, Sciences and , Art. The best college from A-Y. By Jakob and Sean Since 2006 Maquette's Golden Eagles have made it to the March Madness tournament Marquette has a 14:1 student to teacher ratio. 19 offered sports including (Basketball, Track, Skiing, Rowing, etc.) Only an hour and 39 minute drive to Middleton. (Only 28 hours and 17 minutes if you walk) The campus is near Lake Michigan, which provides many activities. (Including: Sailing, Rowing, Fishing etc.) Above: Image of Marquette's campus Marquette University is the 4th best college in the state. Athletics Marquette University Location There are 8 grocery stores withing 2 miles of the campus. 7 Division 1 teams Along with 12 Club sports Academics 80% of first time Undergrads graduate with their major. 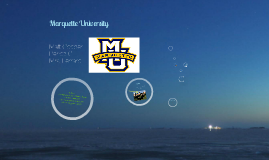 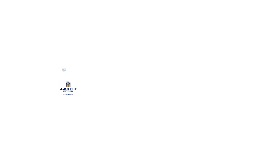 Transcript: Marquette University... About 1,800 undergraduate students and 3,700 graduates and proffesional students. Milwaukee is a large city with 3 museums, arenas and performing arts, lots of public art and monuments, festivals, music, and lots of parks and public markets to visit. Historical Timeline of Marquette University: 1881 — Marquette College opens on August 28 1887 — Marquette's first five graduates earn bachelor of arts degrees. 1909 — President James McCabe, S.J., decides to admit women undergraduates in time for the summer session, making Marquette the first Catholic university in the world to do so. 1993-94 — The $50 million Campus Circle Project leads to energetic investment in the local community. Marquette is chosen as a leading U.S. university for community service by students. 1998-99 — Marquette admits a freshman class of 1,732, the largest two-year increase in freshman enrollment in its history. 2006-07 — Celebration of Marquette's 125-year anniversary — Faith and Learning in Action — takes place throughout the year. 2008-09 — Marquette receives a record number of new student applications, almost 18,000 for fall 2009, up 17 percent from the previous year, and once again ranks among U.S. News and World Report's top 100 national universities. 2011-12 — Rev. Scott R. Pilarz, S.J., takes office as Marquette’s 23nd president. The average tuition cost is about $31,400. Marquette's men's basketball team are the 1976-7 NCAA National Champions. Marquette University's football team was known as the "Golden Avalanche" prior to the program being terminated in 1960. Marquette football posted several successful seasons in the 1920s and 1930s including undefeated seasons in 1922, 1923, and 1930. From 1922 to 1923 Marquette held a 17–0–1 record and outscored its opponents 374–15. Every year Marquette University has "winter flurry", which is a week of fun activities and spirit days right after everyone gets back from winter break. Some of Marquette's neat traditions are Sweet and Sour Tower, Women's wellness week, Very special arts, O'D pig raost, Mashuda First Fridays, McCormick goes to the movies, and Straz on stage. Marquette has a great apparel and book store. At Marquette University you have the choice of studying Arts and Sciences, Business, Communication, Education, Engineering, Health Sciences and Nursing. It is known for having very good Undergraduate Business and Engineering programs. Milwaukee, Wisconsin Their mascot is a Golden Eagle and their team colors are blue and yellow. Golden eagles men's basketball team are the 1976 and1977 NCAA national champions. 1881 — Marquette College opens on August 28 1887 — Marquette's first five graduates earn bachelor of arts degrees. 1907 — Affiliation with a private medical college leads to reincorporation as Marquette University. Construction starts on Marquette's current campus. 1907 — Marquette moves to Johnston Hall at North 12th Street and West Wisconsin Avenue, the building that now houses the J. William and Mary Diederich College of Communication. 1908 — The College of Engineering opens, and Marquette purchases two law schools. 1909 — President James McCabe, S.J., decides to admit women undergraduates in time for the summer session, making Marquette the first Catholic university in the world to do so. 1910 — The colleges of Business Administration and Journalism open. 1913 — The university merges the Milwaukee Medical College and Wisconsin College of Physicians and Surgeons and establishes the schools of Medicine, Dentistry and Pharmacy. 1918 — The Army Student Training Corps, an early form of ROTC developed as a result of World War I, is offered to students. 1920s — The university's student body rapidly grows, and new facilities include buildings for the School of Dentistry and Law School, a science building (now Marquette Hall), a gymnasium, and a football stadium. 1930s — The Great Depression forces financial belt-tightening at the university, including closing of the radio station. 1940s-50s — Rapid expansion of the student body after World War II leads to campus growth, including facilities for the College of Business Administration, Memorial Library and student union. Gen. Douglas McArthur receives an honorary degree in April 1951. 1960s — A detailed plan for expansion of graduate programs while the campus is consolidated between North 11th and North 16th streets through urban renewal efforts is unveiled. 1966 — The Chapel on Long Island, which began to be dismantled in June 1963 and took nine months to complete, arrives on campus. It traveled from Chasse, France, to Long Island, then to Marquette. The chapel was dedicated to St. Joan of Arc on May 26. 1967 — The School of Medicine separates from Marquette to become the Medical College of Wisconsin. 1969 — A reorganization of the Board of Trustees brings in a lay majority to direct the university. 1960s-70s — Campus continues to grow with new chemistry, foreign languages and literatures, and physics 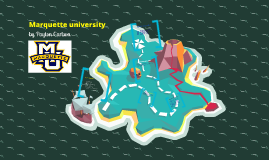 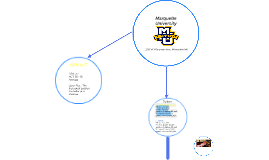