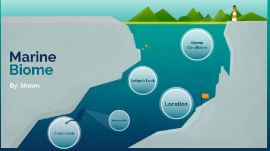 Transcript: Biome By: Shawn Marine The Ocean or Marine biome is full of thriving life from Dolphins jumping in the water or a Great White Shark stalking its prey. Today the Marine still has many mysteries to unravel. We will also look at some interesting plant and animal life and learn a few facts along the way. Introduction Introduction Location Biome's Location The Marine biome is situated everywhere in the world including The Atlantic Ocean, Pacific Ocean, Arctic Ocean, Indian Ocean, Southern Ocean, everywhere around both North and South poles, near equators and covers all other oceans, seas, lakes and rivers. The Marine biome alone covers over 70% of our Earth and is vital in the evolution of life. Biome Conditions Biome Conditions The Marine biome has its calm, peaceful, beautifully, humid areas but, it also has it's extremely harsh and cold areas too. The overall average Marine temperature is 39 F or 4 C. During the night,the Marine biome at temperature drops harshly and so it causes a massive underwater migration to get closer to the surface for warmth. Marine Vegetation Marine Vegetation Some Marine Vegetation are Kelp, Phytoplankton, Cyanobacteria, Sea Cabbage, Eelgrass and Coral. Green Algae Green Algae Chlorophyta Euglenid Red Algae Red Algae Rhodophyta Brown Algae Brown Algae Phaeophyceae Marine Animals Marine Animals Some Marine animals include Blue Whale, Starfish, Sea Horse, Jellyfish, Great White Shark and much much more. All fish have gills which they can breath water from. Mammal fish such as a Orca Whale or a Sperm Whale need air so they must go to the surface frequently to live. All fish also have fins and tails to help them manuever through the water. Other sea creatures such as crustaceans(discluding shrimp or anything shrimp like) or starfishes uses legs instead. Jellyfishes rely on the ocean current to bring them anywhere but, jellyfishes and octopuses both use "jet propulsion'' which is basically sucking water into your body and blowing out the water. Frilled Shark Marine Animals Dumbo Octopus Barreleye Fish Anglerfish Blobfish Indepth Animal/Plant Features Indepth Look Our oceans are full of life and strangeness. Our Earth blocks these oceans with harshness so we can't explore much. To this date, we have only explored less than 5% of our oceans. Today I will show you a indepth look at a plant and animal features. Caulerpa Prolifera Caulerpa Prolifera The Caulerpa Prolifera grows very fast and looks flat with blade-like leaves and straight edges that diminsh to a point. It is found to be at least 15-30 cm(6-12 in) long. The Caulerpa is also commonly called Common Caulerpa or Blade algae. It usually perfers sandy places where water currents flow heavily. Niche Niche The Caulerpa uses nitrate and phosphate to destroy nutrients other invasive algae or plants need so can't grow too well. The Caulerpa lives in a very lit zone so they could grow. Interesting Facts Interesting Facts - The Caulerpa is actually a invasive species itself - The Caulerpa is a single cell with many nuclei so it is among one of the world's biggest single cells - There are many different types of Caulerpa - Caulerpa Taxifolia is especially deadly as it is a killer invasive species, it spreads among the coral reefs killing it slowly and wrecking many fish homes Caulerpa Prolifera Caulerpa Species Caulerpa Species Caulerpa Taxifolia Turritopsis Dohrnii Turritopsis Dohrnii The Turritopsis Dohrnii is called The Immortal Jellyfish for a reason. The Turritopsis can revert back to the polyp stage whenever it feels it is in danger of stavation, old age or anything that can threaten the life of the jellyfish apart from attacks. Turritopsis Dohrnii Turritopsis Dohrnii Niche Niche The Turritopsis Dohrnii eats plankton, crustaceans, fish eggs, small fish, and other jellyfish as it is carnivorous. The Turritopsis can turn itself into a polyp anytime it wants and it can re-grow. Previously known as T. Nutricula, now classified as T. Dohrnii. Interesting Facts Interesting Facts -This jellyfish can live forever -T. Dohrnii used to be T. nutricula -These jellyfish are extremely tiny ranging from 4.5mm as an adult to 1mm as a baby -Transdifferentiation is basically the process of when the jellyfish can turn all its cells into different cells allowing the jellyfish to regrow Conclusion Conclusion Thanks for watching! 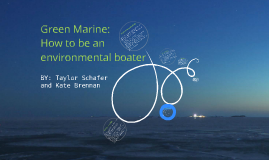 Transcript: -Don't overfill gas tank -Have short route planned before your trip. Travel with currents, tides, and observe weather forecasts -Have supplementing propeller, boat and engine -Keep propeller clean and in good condition. Also clean it after traveling in shallow water to increase efficiency and stop the spread of invasive species -Try other forms of power -Use anti-fouling resin that uses natural materials. -Envirez uses soy oil instead of petroleum. -Use an organic biocide that rides gas tank of bacteria. -Soltron is approved by the EPA and also improves fuel economy -Obey speed limits, speeding could cause erosion -Avoid shallow waters because motorboats could destroy root systems -Reduce your speed to save money and increase fuel efficiency -Keep trash aboard, dispose of it properly on land -Use canvas wrap to protect your boat instead of shrink wrap Policy Solutions Hints and Tips -Restict cleaning and maintence to when your boat is on land -Clean regularly rather than harsh cleaners -Consider dry storage -Keep clean rags for oil clean-up and always dispose of them at hazardous disposal locations -NEVER add soap to oil or fuel spills, it's illegal and toxic to the environment Green Marine: How to be an environmental boater What to Recycle -Place a limit on CO2 emissions from private boats -Grants given to firms developing green products -Set timeframe to phase out toxic or hazardous products -Subsidies/tax exemptions to producers and promote use of alternative fuel methods Save the Bay! BY: Taylor Schafer and Kate Brennan -motor oil -non-toxic antifreeze batteries -oil filters -old sails -shrink wrap and tarps -glass, plastic, cans and bottles -Dispose properly of bilge and sewage Boat Maintenance -Fish and crab responsibly. Observe regulations in different parts of the Bay -Try catch and release methods -Invasive species: plants and animals that are invading the area and diminishing biodiversity -To avoid this always check that animals or plants aren't attached to your boat -Also never litter! Fuel Efficiency What you can do to keep water and marine life healthy 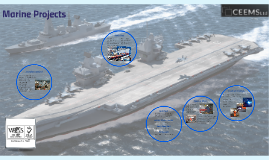 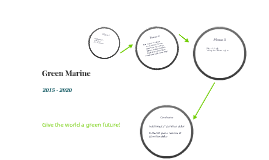