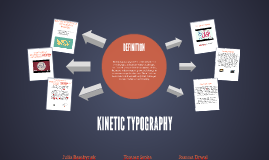 Transcript: http://spaceparanoids.net/# Putting together animated type can be as simple as creating a gif or as complicated as producing a music video. But there are plenty of good – and super easy to follow – tutorials available if you really want to learn kinetic typography techniques. THANK YOU! JARRETT HEATHER Vytautas Jašauskas, Vilnius, Lithuana CREATING VIDEO is a Sacramento artist, musician and software developer. Jarrett makes his living designing, building and maintaining all kinds of software for the California state government. In his spare time he makes silly cartoons, restores neglected 1980s-era arcade games, plays the piano, and dabbles in a long list of less interesting activities and pastimes. Vishank Bhagat, New Delhi, India creating emotional content, creating characters, capturing attention. KINETIC TYPOGRAPHY Kinetic typography became more commonplace in film and later in television. It’s been also used in music videos, during shows and in literature. Kinetic typography refers to the creation of moving type. It is an animation technique that is used to make lettering expand, shrink, fly, move in slow motion, grow and change in numerous ways for the user. The effect can be simple and short with only small changes or quite elaborate and lengthy. Julia Bambynek Tomasz Sroka Joanna Drwal YouTube: Zeppie Is an American singer, songwriter, parodist, record producer, satirist, actor, voice actor, music video director, film producer, and author. BEST USES FOR KINETIC TYPOGRAPHY INCLUDE: SIA - CHEAP THRILLS Kinetic typography can be seen as having arisen from a particular history of poetry on the static page. This history establishes expectations about how kinetic typography should be read and understood. The fact that many examples of kinetic poetry accompany a voice over reading, reinforces how poetry is often experienced as an oral performance. The emphasized connection between the words on the page of screen and their sound as they are read aloud, is one method of differentiating poetry from other forms of writing. KINETIC POETRY CHARLES BUKOWSKI POEM "THE LAUGHING HEART" DEFINITION SHANE KOYCZAN "TO THIS DAY" “Word Crimes” is an official music video designed and animated by Jarrett Heather for “Weird Al” Yankovic. The video uses kinetic typography and evocative visual images to reinforce the didactic tone. The song is a parody of Robin Thicke’s own “Blurred Lines” employing its catchy tune, lyric structure, and even typography (as in the case of the hashtags) repurposed tosatirizes common ways that language is used incorrectly in writing. “WORD CRIMES” BY WEIRD “AL” YANKOVIC AND JARRETT HEATHER “WORD CRIMES” BY WEIRD “AL” YANKOVIC AND JARRETT HEATHER ALFRED MATTHEW WEIRD “AL” YANKOVIC 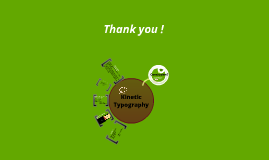 Transcript: Kinetic Typography More contemporary examples? Thank you ! Would we consider bpNichol's work, "First Screening" an example of KT? What is kinetic typography? Conclusion? Why do we like KT? So What? Kinetic typography is exactly what it sounds like. The two words translate to moving type. IT is a subclassification of temporal typography, which means, presentation of type over time. Many people use Adobe Illustrator or After Effects to illustrate the text. The basic process invovles cutting each word out of a block of text, giving it it's own layer, and animating each layer in order, to create an impressive animation. Has anyone made their own KT? What are some of the first examples of KT? "The medium is the message." -Fuller What made the last two examples effective? Alfred Hitchcock's title sequence from "North by Northwest" (1959) is considered one of the first examples of KT. How do you make KT? Is KT the future of writing? Will we see more? 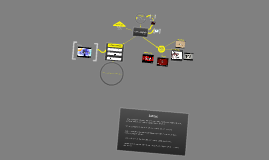 Transcript: Kinetic Typography or in simpler terms... Similar to how music expresses emotion Temporal Typography ZOOMING! Adobe After Effects with effects like . . . whereas Angry Apple Motion How is this done? Example: Purpose / Uses Evolved since the 20 century Adobe Flash Music Videos Example: Joyous th Prezi's Transitions are a Great Example! Animated words! "Type in Motion 2" by Matt Woolman. Published by Thames and Hudson. Public Service Anouncements (engage audience) Enhanced Words Sources Advertising Sad: "What is the effect of affordable video marketing on small businesses" by Vas of Kinetic Typography Services. "Virtual Typography by Mattias Hillner. Published by Ava Publishing Inc. These words appear to have motion "Using Typography to convey Emotion in Text-Based Interpersonal Communication by joonhwan Lee et al. Published by Carnegie Mellon University Changes over time by Jason Bray Express Emotion Example: Barbara Brownie's personal website. She is a professor of Graphic Design, Illustration, and Fashion. or notice how the text itself does not appear to be moving 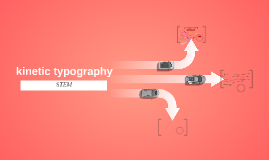 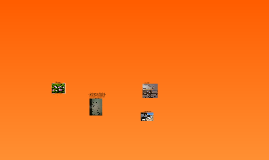 Transcript: killa nation life ass you know it intell kaos hit in ever thing gose wrong whats the perpose of life in this the quition of all man in women her a idea of a school student dosent necessary mean it true in some people live buy these rules when nature hits ress of life 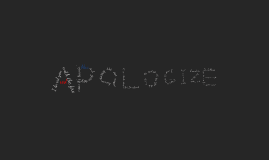 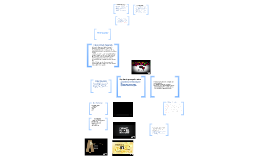 Transcript: Motion Typography motion can be choreographed to: -impart knowledge, -communicate information -convey emotions -express pure beauty History of Kinetic Typography Making kinetic type can seem hard at first, if you don’t know how to use the right software needed to create it. Adobe After effects - allows the designer to make visual effects and motion graphics; Also, it's usually applied in online work / films, and can be also used with other Creative Suite programs, like 'Flash', 'Photoshop' and 'Illustrator' to help smoothly general works Adobe Flash Professional - lets the designer to not only animate, but also allows you make web & mobile apps Apple Motion Ways kinetic type can grab attention Today, moving texts are used worldwide. It can communicate people’s motions. But, it has the inability to express the communicating feedback. Kinetic type can solve the problem by improving text expression applying its significant and moving properties. The main function of it, is to point out whatever message the designer is trying to deliver by animating the type and mixing it with sounds. Since the motion is a constant in everyday life, motion is integral to design. motion literacy, the act of trying to understand how motion can be used to communicate more effectively, is essential. Kinetic type is a new animation method for using text in various and new way. There is much more to come for it’s future, even though, there’s not much to its history. the technical name for "moving text" a creative and exciting video technique that combines the sound and sight to distribute an impressive message based on the power of words it's presented over time in a manner intended to convey an idea or emotion. it also mixes motion & text to express ideas using video animation kinetic typography is made with: What is kinetic typography? In dynamic layout, text elements move in relation to one another. Letters and words may move away from one another on a 2D plane, or in three-dimensional space. Likewise, scrolling typography can scroll across the flat screen, or can appear to recede or advance. It's very attention grabbing and captivating to watch the message interact with the viewer as words swipe across the screen, build and break down to catch our attention much more effectively than stationary text. One of the most effective and common uses of kinetic type is to convey thoughts and emotions first uses of differences of kinetic typography appeared in George Melies ad work in 1899. It wasn’t the kinetic type we use today, but it was simliar that it included moving text to communicate a message. Saul Bass, an Academy Award winning filmmaker and a graphic designer used it in many Alfred Hitchcock films, during the 1950s. One of his films, North by Northwest, applied this method in its opening scene&credits to set up a feeling of suspense for the plot In the 1950s film industry, the advancement of animated titles of film, created a new type of graphic design, called motion graphics. more info kinetic type Use of kinetic type to physically interpret the literal meaning of the info to provide with the word personality to provide the words in a feels/rhythm storytelling technique TV commercials music videos websites movies Storytelling Device Kinetic Typography It’s important to develop with a strong idea and many of thumbnails it’s a good idea to illustrate a storyboard Kinetic Type accesses the knowledge because the actively introduced spoken & written words act as evocative devices supporting each other. 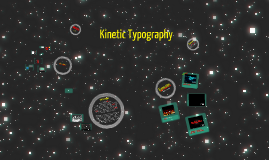