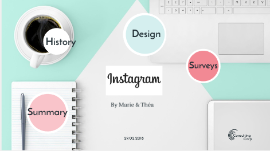 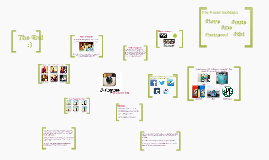 Transcript: Rise Many Companies Use Instagram to advertise their products, here are a few examples: Kim Kardashian Amaro Nike Taylor Swift Hudson Instagram is a free photo sharing and social network app. The app allows users to take a photo, apply a digital filter to it, and then share it with other Instagram users as well as their other connections on a variety of social networking sites. September 2011, version 2.0 went live in the app store- it included new and live filters, instant tilt shift, high resolution photos, optional borders, one click rotation and an updated icon. On April 3, 2012, Instagram for Android was released and it was downloaded more than one million times in less than one day. On April 12, 2012, Facebook acquired Instagram for approximately $1 billion in cash and stock. The development of Instagram began in San Francisco. It was developed by Kevin Systrom and Michel Krieger. The idea for Instagram was conceived when the pair decided to focus their multi-featured HTML5 check-in project Burbn, on mobile photography. Top 5 used hashtags: 1,000 comments per second Many celebrities use Instagram such as: Instagram is What is Instagram? #instagood #tbt #me 8,500 likes per second Instagram allows users to connect and share photos through: President Obama By: CaSandra Dolby No Filter #cute Channing Tatum March 5, 2010, Systrom closed a $500,000 funding round from Baseline Ventures and Andreessen Horowitz while working on Burbn. On March 6, 2010, Instagram entered the Apple App Store. In January 2011, Instagram added hashtags in order to help users to discover other people's photos. coach Gatorade Starbucks Jessica Alba Lo-Fi Top 5 Frequently Used Filters Available on: 40 million photos uploaded per day The End :) X-Pro II Lucy Hale 100 million monthly active users History of Instagram #love Statistics Apple 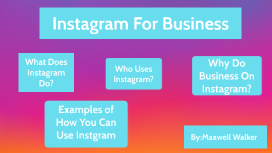 Transcript: Instagram For Business By:Maxwell Walker What Does Instagram Do? Allows users to share the events in their lives with short videos and pictures Allows users to connect to each other and friends to communicate Allow people to see what their friends, family, and celebrities are up to Provides a platform for those looking to become famous through sharing their lives Who Uses Instagram? The platform is easily acessible to people looking for many diffent things, including Individuals looking to share their lives Companies looking to spread awareness of their brand Individuals looking to gain attention and become popular Content creators looking to gain money from sponsorships and through selling their personal brand Photographers looking to share their work Individuals looking to absorb this free conent and more from other accounts Why Do Business On Instagram? You can market your product or service to over 1 billion users across the world, through means such as Instagram-created advertising services for various forms of posts Paid sponsorships or brand endorements from prominent accounts Creation of company accounts to run giveaways and other events to spread awareness of your company brand Allow followers to enter into events by creating posts themselves to spread brand awareness Advertising on Instagram allow you to connect with a wide variety of demographics across the world, with the average user in 2018 spending over 50 minutes each day on the app. Specific Examples of How To Use Instagram For Your Business Examples of How You Can Use Instagram Create promotions for new products or projects to build interest for their release Create an account for people to find exclusive deals and offers for your brand Pay a popular creator to include, wear, or review your product in a short video for their audience who wants to get in on the latest products Create a giveaway in which users show their support for the company to their friends and others who view their posts to spread awareness 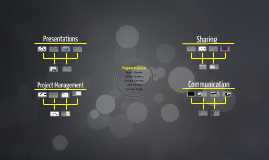 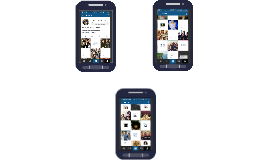 Transcript: @MuradOsmann @HOWTOUSEPT2 @80/20Rule #CreateEngagement #PostOnRightDaysAndTimes # Over 300 million active users # Over 80 million pphotos are posted daily # 75% of Instagram accounts are from outside the United States # Over 40 billion photos have been shared # 3.5 billion photos are like on average daily #FeatureCustomers @VideoAds # A sneak peek can help your corporate story # Give followers a real sense of how things are behind the scenes # Emotional connection by humanizing the brand # Example: HubSpot @Sponsoring #UseTheRightHashtags @ConnectYourFacebook # Increase brand visibility and improve image # Could inspire followers to purchase the product or service # Kickstart hashtag trends, leverage popular hashtags # Example: Expedia's #ThrowMeBack campaign #INSTAFAMOUS @FollowAnd LikePhotos @HOWTOUSE #BehindTheScenes # Branded as the "world's most versatile camera, "GoPro needed a channel to show the world its innovative product # 2080 posts, 6.8 million followers to date # Key influjencers created user generated content (UGC) # Customer-centric: #MusicMonday, #TravelTuesday, Photo of the Day # Heritage content: GoPro's 140 sponsored athletes # Encourages content capture, create and sharing > engagement, intent and sales # 28% of Instagram users live in urban areas. # 26% of Instagram users live in suburban areas #19% of Instagram users live in rural areas Press here @AgeDemographics #Animals @WhoUsesInstagram? @TipOne @TipTwo @LocationDemographics # 29% of online females use Instagram # 22% of online males use Instagram @TheFatJewish @BrandYourself # Trackmaven recently did a study on Instagram accounts to see how filters affect engagement and found that Mayfair, no filter and Inkwell drove the most interaction. #UseTheRightFilters #2014ShortAwards - Best on Instagram: GoPro #FosterMoreInterest # Build awareness an introduce the audience to future plans # Encourages users to visit other platforms for additional info # Example: Ascension # Certain times and days of the week are better for posting pictures for follower and potential follower engagement # You can use a program like Iconosquare for a detailed analysis of your posting history vs. engagement. @TipThree # Follow a user you like with a large following # Like and comment on their photos @TipFour # Real name: Josh Ostrovsky # Has over 6.5 million Instagram followers # Became famous posting popular Internet memes # Now has a book deal, his own wine brand and a tv pilot @TipFive @CarouselAds # Certain hashtags will increase traffic to your page and views/likes of your photos #PromoteNewProducts #WaysOrganizationsUseInstagram @PersonalBranding # Instafamous: Those who have become famous via Instagram #ENGAGE # Visually highlight new features, products and services # Example: Xbox One @UseRelevantHashtags @SponsoredAds # Brand engagement - real people using products and services. # Showcase brand values while highlighting your customers' experiences # Example: GoPro # Originally named Burbn # Created by Kevin Systrom and Mike Krieger and launched in October 2010 # Instagram is a portmanteau of "instant camera" and "telegram" # January 2011, Instagram added hashtags (#) # April 2012, released to Android users # April 2012, Facebook bought Instagram for $1 billion # By May 2012, 58 photographs were being uploaded and a new user was being gained each second # 300 million users on December 2014 click here @WhatYouCanDoWithSponsoredAds @GenderDemographics #HowWellAreYouDoing OnInstagram? @HowToGainMoreFollowers @ImageAds @HISTORY # Certain filters are shown to have an impact on your engagement # Created an internet sensation by using his Instagram account to post photos of his girlfriend leading him, by the hand, through gorgeous landmarks across the world. # All pictures are the same pose @TipTwoCtd # Follow a user you like with a large following # Like and comment on their photos # Largest population of young users of any social media platform # 53% of online 18-29 year olds use Instagram # 25% of online 30-49 year olds use Instagram # 11% of online 50-64 year olds use Instagram # 6% of online people 65 years and older use Instagram # Iconosquare - the only app providing metrics for Instagram # Statistics, Facebook Custom Tab, Timeline integration and Cover picture generator # Optimization chart: track followers’ engagement with recommendations on best times to post @InstagramVideo @EngagingImages 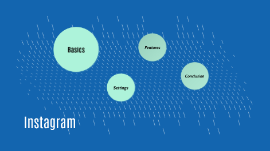 Transcript: Instagram - Instagram is a social media app where you can post pictures with your friends and family - You can follow your friends to see what they post Basics Basics - You can make your account private which makes sure that only people who follow you can see your profile Settings Settings - When you make your account private, you control who follows you. People have to request to follow you and you can either decline or accept the follow - Instagram lets you share pictures with your friends. If you find a picture you want to share with your friends, you can directly send it to them without having to leave the app just like Pinterest Features Features - You can edit photos in Instagram. You can put filters and other things onto photos you like - You can also get notifications when someone you follow posts a picture In conclusion, I believe that I should be able to have Instagram because I will be able to connect with my friends easily and share photos with them. I will use it within reason and not be on it all the time. Conclusion Conclusion 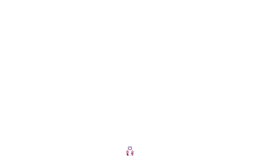 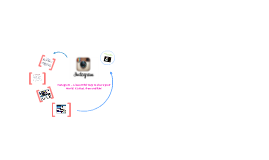 Transcript: Here is description step by step how to use the application - A free photo-sharing application that allows users to take a photos, apply filters, and distribute them through its service and other social networks. An accurate information Here is how Instagram looks on the IPhone screen Instagram – A beautiful way to share your world. It's fast, free and fun! The application is compatible with iPhone, iPad, and iPod touch on iOS 4.0 and above, as well as phones on Android 2.2 or higher with support for OpenGL ES 2. It spreads through the App Store and Google Play respectively. The first issue October 6, 2010 Interface languages: English, Chinese, French, Italian, Japanese, German, Korean, Spanish and Portuguese In September 2011, was released version 2.0 application, which appeared live filters, instant change in the slope, four new filters, high resolution photos, optional borders, turn one click and update icon In April 2012 was released application for Android, which is a day were downloaded over a million times. Instagram