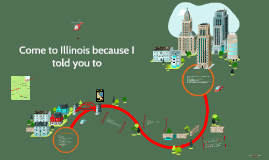 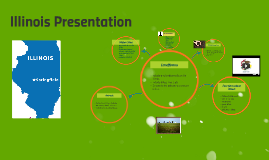 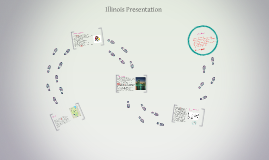 Transcript: 1673—Louis Jolliet and Father Marquette arrive in Illinois 1699—Cahokia is founded, the oldest town in Illinois 1717—Illinois becomes part of French Louisiana 1763—England receives Illinois at the end of the French and Indian War 1787—Illinois becomes part of the Northwest Territory 1809—Illinois Territory is created 1818—Illinois becomes the 21st state 1837—Chicago incorporated as a city 1848—The Illinois & Michigan Canal completed 1871—Fire consumes much of Chicago 1888—Present-day State Capitol built 1900—Completion of the Chicago Sanitary and Ship Canal 1958—Illinois tollway opens 1959—The St. Lawrence Seaway opens 1992—Carol Moseley Braun becomes the first black woman in the Senate Illinois was the 21st state in the USA. It became a state on 13th December 1818. It is the 25th biggest state in the USA. Found in North America, it is located in the eastern north central region. Illinois borders Indiana to the East, Wisconsin to the North, Iowa to the West and Missouri to the East West. It's main cities and towns are Chicago, Aurora and Rockford. Illinois Presentation Conclusion Thank you for listening. This presentation was just a bit of extra information that I wanted to share with you. there are some interesting facts. Overall Illinois is a historic yet modern state with many things to offer. By Clarissa Dakin :) The History of Illinois How does Migration affect Illinois? Interesting Facts Crime and the Environment 1) Walt Disney was born in Chicago. 2) The world's longest street is in Chicago - Western Ave. 3) The world's largest gum manufacturer is in Chicago - William Wrigley. 4) The world's first Ferris Wheel was at the Columbian Exposition in Chicago. 5) Illinois is only the 15th state to allow gay marriage 6) The Chicago River is dyed green on St. Patrick's Day. 7) The world's first skyscraper was built in Chicago.. 8) The first aquarium opened in Chicago. 9) The state snack of Illinois is popcorn. 10) Chicago has more than 45,000,000 visitors per year. Illinois Obviously, we can tell that if there is an increase in population there will also be a rise in waste generation and pollution. Over the years, because of immigration, there will be a new need for landfill sites, because of the rise in waste disposal. Illinois has many lakes and rivers flowing through it, which means that even though there are lots of immigrants, this will not affect water consumption. According to the Illinois Department of Corrections, there has been a serious increase in prisoners over recent years. Now there are more than 35,500 people in state prisons, of which over 2,000 prisoners are immigrants. This shows that Illinois is suffering a higher crime rate. Illinois is now the 6th largest state in the Nation however it has not grown much for some decades. Its 1960 population was just over ten million, compared to 11.4 million in 1990. Migration out of Illinois to other states has been increasing in recent years, which means that there is a low growth rate. Native-born Illinoisans are migrating out of the state, while different cultures are immigrating in. This means that over time there are lots of different cultures living in Illinois. According to the Chicago-based Latino Institute, immigrants earn 20% less than native-born Illinoisans, and as there are less native-born Illinoisans in the state than before, this could mean that the state could suffer as it is getting less income from wages. Also, according to the same study, Illinois population will rise from 11 million to 14 or 15 million. This means that the state will have to build at least 400 more schools to fit in the children that are immigrating.