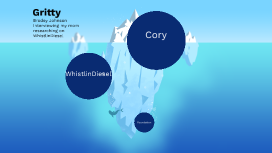 Transcript: Gritty Brodey Johnson Avid/CORE PER 7 May 9 Interviewing my mom researching on WhistlinDiesel Date 1 WhistlinDiesel WhistlinDiesel Who is he? WhistlinDiesel is a guy actually named cody he has a lot of money and dose not know what to do with it so he spends it "We're just gonna see what [the Hilux is like] after a normal day on the farm, normal driving conditions, what a normal person would do… averagely… over the course of 25 years, in one day. No crazy tests, just averageness." Grity He was wrecking things too fast and not a lot of people knew of him so he started wrecking things that people really liked and he used his haters to make more money. How he became famous Other approaches He became famous for buying nice things and wrecking them. Mom Aka Cory Cory I asked her some questions and these are her responses What is one long-term goal (personal or professional) you have/have had? When I was younger I wanted to help animals. Have you ever failed along the way while trying to achieve this goal? What obstacles stood in the way of achieving your goal? been able to help lots of animals. Life, money and working got in the way of that goal. Did you ever think of giving up? What made you persevere? I don’t help a lot of animals but I have been able to have 2 dogs that are living their best life with my family. I am most proud of my love for my step-son Brodey. When I first came into this life it was hard but made me feel a part of his life. He has become like my own child and I’m so proud of that. What accomplishment are you most proud of? Why? When faced with hard times and choices my advice is pray on it, keep going and power through. Life is hard but you can always find good and reason to keep going for your dreams. What piece of advice would you give me about failure/goals/grit? Why I thinks shes Gritty She worked her way from being a vet to a person that runs a office 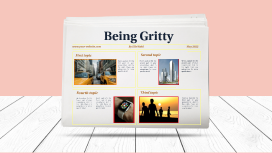 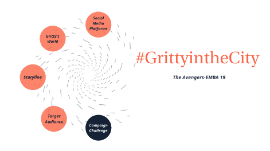 Transcript: #GrittyintheCity The Avengers-EMBA 19 Campaign Challenge Improve overall fan attendance and awareness for Flyers "Soften" the Gritty brand to improve children interaction Enhance family experience for game attendance Improve posting on game day and post game to promote single game attendance Develop the next generation of Flyers fans What is the campaign goal? Target Audience Parents of children aged 8 to 14 years old Disposable income Located within 50 mile radius of Philadelphia including Lehigh Valley, Delaware, and South Jersey Target Audience Where Gritty is from He was born and raised in Philadelphia with dreams of playing hockey....and growing a beard Who Gritty is: He loves everyone, wants everyone to be included, and have fun He LOVES the Flyers and wants everyone to LOVE the Flyers too! He eats a lot of carrots...that's why he's orange Gritty's Story Storyline Social Media posts of Gritty learning about the city that is kid friendly and educational This will teach kids about the Delaware Valley (Flyers Market) and learning about the history ala Dora The Explorer This will provide family friendly content that will also promote the Flyers and Gritty It's a Gritty City and we just live in it Gritty's World Instagram and Twitter #GrittyintheCity: share photos of him in the community #Grittygang: people sharing photos of themselves as Gritty or Gritty apparel/merchandise Will also have a fan club page with special ticket offers, merchandise, meet and greet with Gritty and Flyers Instagram Specific A "Gritty Filter" that your kids/family take selfies to have posted on the Jumbotron Social Media Campaign Social Media Platforms 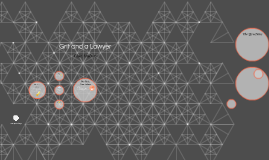 Transcript: Lisa Andrus Mom: Drugs-Alcohol-No job -Not able to care for kids Homeless at 5 Went into CPS Not a lot of money in college Threatened for being a good lawyer Full time job in law school Almost no money in high school Grit and a Lawyer Overcoming the Obstacles The Goals Goals accomplished Married Daughter 15 years being a lawyer 10 years being a prosecutor 3.7 GPA in high school Became a prosecutor Went to law school Became a lawyer Fun Facts: Lisa Andrus She wanted to be a lawyer Go into cps Have a good GPA in high school Go to law school become a prosecutor Obstacles The Questions Got fostered then adopted Worked a full-time job worked a job in high school also people some times discouraged her by putting her own Pushed through the threats Company Logo 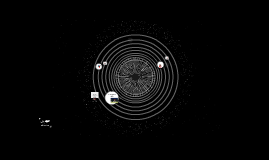 Transcript: Aimed goal... GRITTY by:Nick Alfaro Chris Targac has had grit throughout his tire life, in the class room, to help his friends and family through tough times, but most of all through his beloved sport baseball. Before Chris could even walk he dreamed to be in the major leagues. With determination, and support from his family his goal was achieved and having Grit is a huge supporter in achieving your goals. Following in his path... Obstacles that tried to stop a dream... The "Grit" to the big leagues, Chris Targac. His life is amazing and he couldn't ask for any greater kids or loving wife. His grit to lead himself in the right path to reach the major leagues and earn money for his family. His son Ryan Targac is following in his footsteps to accomplish what Chris did and having grit will get him there. Chris Targac With little money in the targac family, shelter and food was scarce especially with so many siblings. Baseball was a privilege to play for him because time was limited with school and helping his family. But it didn't matter because his ability to play the game was outstanding and making Varsity as a freshman was a huge accomplishment Chris made. So even through the challenges he had to go through as a child, Chris had grit to play baseball. Chris targac to his son Ryan Targac add logo here 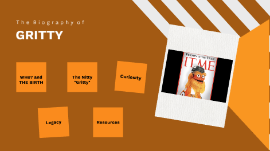 Transcript: T h e B i o g r a p h y o f GRITTY WHo? and THE BIRTH The Birth Gritty (mascot) was born on September 24th, 2018 at 200 lbs and 7 ft tall to the proud parents of the Philadelphia Flyers National Hockey League. Googly EYES! First ever appearance Squeaky belly button! Little known facts 2018 The Nitty "Gritty" Gritty WHO The Flyers Organization "We want Gritty to be intimidating, "someone you would high-five, not hug"" "An acid trip of a mascot" The Guardian Conan O'Brian "Everyone's asking...who is Gritty supposed to be? Is he a muppet? Is he a yeti? 2018 2018 What are people saying? "His hair wasnt great. His beard was kind of bizarre. You just don't know what to think of him." - Heller Before the Big Reveal Creators Input Who's in the costume? The Flyers wont reveal who inhabits the costume. However, they do say, "We found the craziest guy we could. After we met him, we knew he was the right guy for the job." "We did a launch at a kids museum...the kids were screaming with him! Not at him. We were like Awesome!" Im not sure what exactly hes very fast Here's another video Curiosity Curiosity you decide for yourself! Legacy Legacy WHo does Gritty stand for? Not only the Philedelphia Flyers. Rumor has it Gritty is a leftist and supports Bernie Sanders in the upcoming 2020 election. ""Don't let anyone tell you that you cannot make a difference when you get involved in the political process. - Bernie Sanders " - Gritty" He is who he says he is Resources 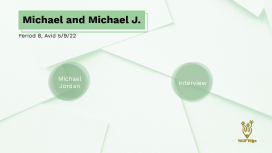 Transcript: Michael and Michael J. Period 8, Avid 5/9/22 Michael Jordan Michael Jordan Michael Jordan was born on February 17, 1963. He's also a famous NBA player Quote Quotes "I can't help failure, everyone fails at something." "Stop it get some help." "Once you leave the ground, you fly. Some people fly longer than others." Why I think he's gritty Why I think he's Gritty. Michael Jordan's determination and struggle displayed a lot of grit. His goals were set high and he was really determined to reach them. He even got cut out of his high school basketball team. And still continued to try. Interview Questions with Demarcus Bartholomew Interview Demarcus Bartholomew's long term goal was to earn a college degree. Something that got in the way of Demarcus goal was lack of motivation. How he had more motivation to persevere...? My parents were yelling at him. And I guess that gave Demarcus some motivation More interview questions Interview Questions Something that he's proud of is that he actually accomplished his goal and got a college degree. He said said some advice he would give you is actually go to class, and work hard. My own questions: How has failure helped you? He said failure has helped him because when he failed my parents got mad at him and that somehow gave him motivation. More interview questions More interview questions My own questions: If you stopped how different would you be now? Demarcus Bartholomew said if he didn't have any motivation he'd probably be working at McDonald's. What does grit mean to you? Courage and Resolve. 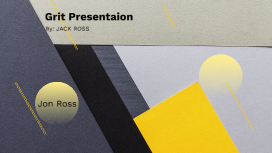 Transcript: Grit Presentaion By: JACK ROSS Jon Ross Jon Ross A long term goal he had was oning a piece of lad and building a shop house. He failed along the way and Life was in his path. He never thought of ging up on his Dream because failing wasnt an option. An accomplishment he is most proud of is his family becuase family makes him happy. Some advice he gave me for the future was Never Give Up Quote: keep your nose on the grindstone Ben Simmons Ben Simmons is the greatest shooter Ever but he hasnt got to prove it to anyone because he is super cute and nobody can stand it he is gritty because he is told to be the worst shooter of all time but i think next year he will show everyone that he is the greatest shooter ever Ben Simmons I Am the greatest shooter of all time