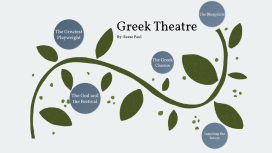 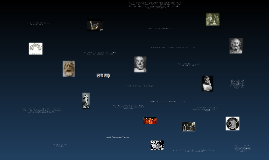 Transcript: Greek Drama and Theater Classical drama began in the sixth century B.C. At that time, religious festivals took place in Athens each spring in honor of Dionysus, the god of wine and fertility, or new growth. At this festival a chorus of masked dancers performed on a circular stage, singing hymns to this god. In 535 B.C.,Thespis of Icaria, a Greek poet, introduced the first actor on stage. The word "thespian," meaning actor, comes from his name. The actor impersonated various characters by wearing different costumes and masks. They would also take part in dialogue with the leader of the chorus. Religious in nature, these plays explored deep questions such as the role of fate in human life or the relationship between mortals and the gods. As time passed, Greek plays became entertaining, and writers could compete for prizes by staging plays at the festival of Dionysus in Athens. Hundreds of plays were performed at these festivals, but fewer than 35 survived. There were three great writers from this time period. Aeschylus added a second actor on stage, therefore, creating dialogue between two characters. Sophocles added a third actor, making plots more intriguing and complex. Euripides created spectacular stage effects and portrayed characters in highly realistic ways. His play Medea, for example, explores the motives of a woman guilty of a horrid crime. Most of these writers based their plays on familiar legends and myths. The audience knew the story, but the characters did not. This created an ironic perspective. Like the gods themselves looking on, the audience looked on, knowing what would happen, and yet caring deeply about the characters who suffered on stage. Greek masks were used to portray different emotions. It amplified voices and allowed actors to portray different characters. The main parts of a Greek theater were the theatron, parodos, orchestra, and the skene. 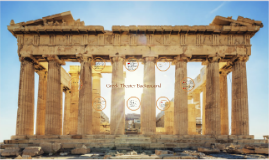 Transcript: Plot Sophocles Masks amplified voices like megaphones Actors wore elevated shoes Actors on platform Skene – area behind platform, dressing and backdrop Below stage- orchestra (dancing place for chorus of fifteen) No more than three characters appeared on stage Chorus provided necessary background information Drama developed from celebrations honoring Dionysus, the Greek god of wine and fertility In March, citywide celebration with sacrifices, prizes, processions, 3 days of drama Thespis is considered the "father of drama" Foil -A foil is another character in a story who contrasts with the main character, usually to highlight one of their attributes. Aside - a remark or passage by a character in a play that is intended to be heard by the audience but unheard by the other characters in the play Monologue - an extended speech spoken by one person. Soliloquy - A type of monologue that isn't heard by the other characters. Is meant to reflect the characters inner thoughts. They named him “Oedipus” which means “swollen-foot” because of his injured ankles. As a grownup, Oedipus was accused by a drunken guest of not being his father’s son, so he traveled to consult the Delphic oracle. The oracle prophesied that Oedipus would kill his father and beget children by his mother Horrified, he vowed to never go back to Corinth Aristotle believed that plot was the primary element in tragedy, and the plot must follow these four principles: 1) The plot must be a whole, with a beginning, middle, and end 2) The plot must be internally whole, with incidents relating to each other and not interrupted by a deus ex machina or completed by a coincidence 3) The plot must reflect a serious treatment in terms of its complexity and universal appeal; and 4) The plot should not only include a change of fortune for the central character, but also some reversal or surprise and a recognition within that character of his/her changed status that brings about knowledge. Tragedy Tragedy dealt with the big themes of love, loss, pride, the abuse of power and the fraught relationships between man and gods. What does the content of Greek plays teach you about their societal values? Greek Theater Background A convention used in Greek tragedy after Sophocles for lowering or lifting actors playing gods by means of a crane on the skene (stage building that serves as dressing rooms). The Latin phrase deus ex machina, “a god from a machine,” is now used for any quick means of resolving a plot. Dramatic - Dramatic irony is when the words and actions of the characters of a work of literature have a different meaning for the reader than they do for the characters. Situational - when the outcome is contradictory to what is expected. Verbal - when a person says or writes one thing and means another. The person is aware. "Oedipus Complex" "Electra Complex" Oedipus as a Tragic Hero Types of Tragedy Because of a prophecy that their son would kill his father, Laius and Jocasta, King and Queen of Thebes, gave their infant to a shepherd with orders that he be left on a mountainside to die. The shepherd, after having pinned the baby’s ankles together, took pity on him gave him instead to a Corinthian shepherd, who presented him to Polybus and Merope, King and Queen of Corinth, a childless couple who adopted him as their own. 1. Unity of Time - action takes place within 24hrs. 2. Unity of Place - Action was limited to one setting (violence and death took place off stage) 3. Unity of Action - no subplots, focus on one main character Basics Drama/AP Terms to Know Irony Motifs: Lightness vs. Darkness Sight vs. Blindness Themes: You cannot judge a man until his last day. All men are susceptible to the dangers of pride. The struggle of accepting fate or free will. Comedy Comedy- The first comedies were mainly satirical and mocked men in power for their vanity and foolishness. What does satire mean? “What goes on four legs in the morning, two legs at noon, and three legs in the evening?” Motif - Motifs are images, ideas, sounds or words that help to explain the central idea of a literary work. These will occur throughout the work Theme - A central or dominating idea in a literary work. It is what creates meaning. A work can have more than one theme. For AP level thinking, you need to always be connecting the author's choices back to theme. Focus on how the various characteristics of a work create/support theme. Catastrophe - The resolution of the plot of a tragedy, depicting the final downfall of the protagonist Miasma - An accursed state due to wrongdoings, causes a deathlike atmosphere, often referred to as "pollution" Peripeteia - The reversal of fortune, the moment in a plot when the hero's story takes an unexpected turn, an action has the opposite effect than intended. 1)Prologue - gives background 2)Parodos - chorus makes entrance, gives perspective on what audience has learned * chorus sets mood, emphasizes main themes, foreshadows 3)Episodes-characters engage in 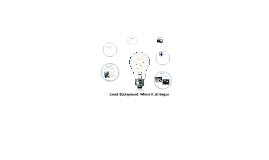 Transcript: Golden Age of Greek Theatre Pericles (560-510) 5th Century was enjoyed politically and artistically and lead us to where we are now Made the Arts Happen Aegean Culture early 17th Century 5th Century B.C.E. Pericles ruled the empire when Athens was a major force in the Mediterranean Under Pericles, Athens built many numerous temples, and public buildings, among the Parthenon Forerunners of Greek Civilization (460-430) Greek Background: Where it all began ATHENS BEGAN FIRST DEMOCRACY Polis, city-state, became a major political unit Divisions insisted on recognizing that each were different, especially based on dialect Nobles starting coming to power improving social conditions and promoting the arts OVERALL Redistributed land, promoted farming and trade Made Athens the cultural center Enlarged festivals Pesistratus The gods, heroes and history of the Aegean culture supplied the material for Homer’s Iliad and Odyssey