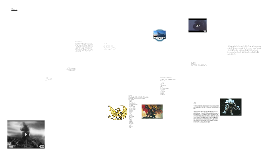 Transcript: Godzilla by Darby Link-Newman Back story(of the character): Godzilla started as some sort of t-rex living on a remote island in Japan named monster island. When the first atomic bomb hit Hiroshima it transformed said t-rex into that guy in a sweaty rubber suit, Godzilla. The idea of Godzilla Not many people grasp the idea of Godzilla because,I'll admit, it's easy to lose yourself in the vast crumbling ruins left behind by a humongous lizard(mind the giant monster corpses). But what not many understand is that Godzilla is very serious,admittedly not all the time,but that's not the point. Godzilla's story is of the devastation of nuclear weapons and their deadly aftermath, next time you hear someone saying Godzilla is just a guy in a sweaty rubber suit remember that. Godzilla as Tanaka saw it The theme of movie as Tanaka saw was nature's revenge for creating the destructive atomic bomb. Godzilla combines the fears of Japanese people. Here is a old Japanese saying jishin, kaminari, kaji oyaji. list most fears in the world as fire ,thunder , earthquake and father. Cities fire bombed and great human loss affected the people of Japan. Tanaka chose Godzilla to speak about these topics. Cultural impact Godzilla is without a doubt one of the most recognizable symbols of Japanese pop culture and when he is taken seriously he is seen as a metaphor. Toho tried the whole giant scary monster but they very soon started gearing it towards kids, and over the years it has switched back and forth but it has settled some where in the middle. Cultural impact2: so you may have noticed that sometimes people use "zilla" as a suffix to mean this is big and scary characteristics and ursome powers Godzilla has a myriad of attributes and powers here are some: -dorsal fins -roar -atomic breath -pulse -laser eyes - basically indestructible -regeneration -really strong -radiation -frogzilla! - pretty smart Monsters If you thought Godzilla's list of powers was long than you should see the list of monsters he fights! these include: -Anguris -Rodan -king Ghidorah -mecha king Ghidorah -Desotryah -mecha Godzilla -mecha Godzilla 2 -mecha Godzilla 3 -Megagirus -Megalon -Gigan -Hedora -Baragon -Spacegodzilla -Mothera -Ebirah -Titanus -Biollantie -KingKong -large spider -Orga -king Sesar -Zilla Resources: Godzilla 2000 Godzilla on my mind by William Tsutsui personal knowledge http://en.wikipedia.org/wiki/Godzilla Orga I mentioned previously that Orga is my favorite Godzilla monster(besides Godzilla) so I thought I should talk about him. Orga appers in the movie Godzilla 2000 and starts as a giant space tur--I mean UFO that crashed in the ocean a long time ago... or something. About a quarter into the movie the military dig up the UFO at which point it fly's a way and shoot's Godzilla, whoops. Then Godzilla blasts him with all a dat atomic breath goodness, Orga crashes then steals lots of information and Godzilla's DNA, the UFO make's an Orga, then they fight.

Transcript: GODZILLA! Monster Type Popular Culture Godzilla Movie: 1970 ORIGINS Made in Japan Created by Toho Released in 1954 Lots and lots of sequels! HISTORY The 'H' bomb Symbolised 'destruction' Originally the villain But then became a hero... But the Americans remade him 'bad' again... DESCRIPTION Godzilla stands as tall as a tower, with scales the size of human heads. He hulks, he stomps, he roars with the might of a thousand lions. A tail for slicing bridges in half, a mouth jammed with teeth as big as vehicles, Godzilla is a gigantuan beast! STRENGTHS Shear size! Blasts fire from his mouth Tail can crumble buildings Impervious to bullets WEAKNESSES IQ level Doesn't know how to use his thumbs! ADVOCATION Who else can destroy cities like Godzilla? Biggest monster in history! Seriously, who would you rather on your side? This guy? Or this guy? THANK YOU!! 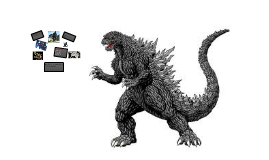 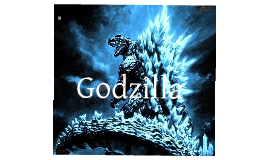 Transcript: Godzilla G Godzilla was portrayed as a monster and a metaphor for nuclear weapons This Image reveals the attacks on both Hiroshima and Nagasaki by nuclear means during WW II President Harry S. Truman was the president who ordered both attacks pleasure pain principle: Where there is pleasure , there is also pain. pleasure=victory pain=the civilians in japan that were killed by both attacks We have genuflected before the god of science only to find that it has given us the atomic bomb, producing fears and anxieties that science can never mitigate - Martin Luther King Jr o d i l i a a h l t s w z 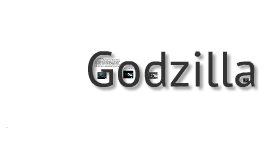 Transcript: Godzilla Godzilla Godzilla First appearance in 1954 Godzilla is a 1998 science fiction monster disaster film film co-written and directed by Roland Emmerich. It is a loose remake of the 1954 giant monster classic Godzilla. The storyline was conceived from a screenplay written by Emmerich and Dean Devlin. The film relates a tale of a nuclear incident in the South Pacific which causes an abnormal mutation to occur in a reptile Godzilla vs Megalon Godzilla VS Spacegodzilla godzilla vs mechagodzilla 3 godzilla vs KING GHIDORAH 2004, godzilla final wars Godzilla 1998 godzilla vs zilla 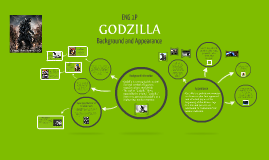 Transcript: Godzilla is a recognizable action/fictional symbol of Japanese popular culture worldwide. The earlier "Godzilla" films, especially the original "Godzilla" from 1954, portrayed Godzilla as a frightening, nuclear monster. As the series progressed, so did Godzilla, changing into a less destructive and more heroic character as the films became geared towards children. Since then, the character has fallen somewhere in the middle, sometimes portrayed as a protector of the Earth (notably Japan) from external threats, and other times portrayed as a destroyer. Godzilla is a prehistoric monster or dinosaur who first appeared and attacked Japan at the beginning of the Atomic Age. His size and powers are attributed to mutations from atomic radiation. Godzilla has rough, bumpy charcoal grey scales, a long powerful tail, and jagged bone-coloured dorsal plates. Godzilla's atomic breath is his most powerful and distinctive weapon. Godzilla is strong and dextrous, using martial arts techniques in combat. Godzilla is able to survive in the ocean for extended periods of time and is as adept a fighter underwater as he is on land. Coming Soon: Summer 2014 In August 1945, near the end of World War II, the United States dropped two atomic bombs in Japanese cities Hiroshima and Nagasaki. These bombs gave off deadly amounts of radiation and killed 90,000-166,000 people in Hiroshima and 60,000-80,000 people in Nagasaki. Background Information GODZILLA 1962: King Kong vs. Godzilla Godzilla protects his newborn son from a group of Giant Mantises in this movie. Godzilla represented the fears that many Japanese held about the nuclear attacks on Hiroshima and Nagasaki, and the possibility of recurrence. Powerful tail Japan 1945: The Terror of the Atomic Bomb 1971: Godzilla vs. Hedorah In this movie Hedorah, the smog monster, is born due to pollution on Earth. Godzilla must save Japan by defeating this toxic villain. Dorsal plates Rough Scales In this movie angry Godzilla goes on a rampage through Tokyo and Mothra must save the city. When Godzilla uses his atomic breath, his dorsal plates glow and then he releases a concentrated blast of radiation from his mouth. Appearance 1964: Godzilla vs. Mothra This movie represents WWII: King Kong (America) vs. Godzilla (Japan). ENG 1P 1954: Godzilla is born Godzilla 1954 trailer Background and Appearance The original Godzilla 1967: Son of Godzilla Atomic bomb mushroom cloud over Nagasaki 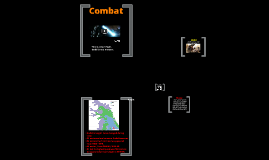 Transcript: History Godzilla's roar can wipe up an entire army! This is a short fight . Godzilla vs a monster. Combat Godzilla height have changed during time. 12 meters when he was a Godzillasaurus. 50 meters the first time he appeared from 1954 - 1975. 80 meter , from 1984-89, 2000-04. At last its highest peak was 100 meters he appeared at that height in 1991-95. Hieght KIng of the Mosnters Godzilla ROAR a Japanese movie monster, first appearing in Ishirō 1954 film Godzilla. Since then, Godzilla has gone on to become a worldwide pop culture icon starring in 28 films produced by Toho Co., Ltd. The monster has appeared in numerous other media incarnations including video games, novels, comic books, television series, a 1998 American remake and a second American version is in development. With the atomic bombings of Hiroshima and Nagasaki and the Daigo Fukuryū Maru incident still fresh in the Japanese consciousness, Godzilla was conceived as a monster created by nuclear detonations and a metaphor for nuclear weapons in general. As the film series expanded, some stories took on less serious undertones portraying Godzilla as a hero while other plots still portrayed him as a destructive monster. 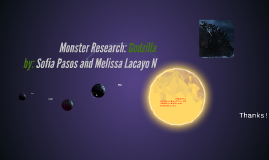 Transcript: During the Hiroshima and Nagasaki bombing, Godzilla was created as a metaphor for nuclear weapons. The name Godzilla comes from the Japanese words: gorira, which means gorilla, and Kujira, which means whale. He became the savior or earth because he killed other threatening monsters. Godzilla only hates humans because humans hate him. Weighs 20,000 metric tons and is 50 meters tall. Websites: Godzilla.monstruos.com Godzilla.wikia.com Csupomona.edu Thanks! Japan Appearances in literature Qualities Creator: 5 Facts: Origin: Tomoyuki Tanaka Why is it a monster? Monster Research: Godzilla by: Sofia Pasos and Melissa Lacayo N Gigantic pre-historic creature. It is basically a dinosaur. Godzilla appeared in many comic books. *No appearances in performing arts. First appearance: Because it is gigantic, and from another era. even though its intentions are not to kill humans, it still does because of its size. 1954 Godzilla film