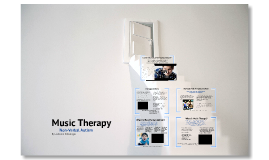 Transcript: Non-Verbal Autism ~The UK Sun Therapy Centers ~Since the beginning of time music has been a source of nonverbal communication. ~Music therapy is one of the ways to a child to improve speech communication Why Would a Music Therapist be Beneficial? It serves as a advocate for music therapy on state and federal levels It represents therapist in the United States and 30 Countries in the world. ~The America Music Therapy Association (AMTA) is the largest music therapy association in the world. ~Music therapy is often a success because people with autism are most often interested and responsive to music information from musictherpy.org living-unlimitedinc.com rebeccacenter.com ~No one knows for sure why some people with autism can't/don't use a spoken language It also provides research, scholarships, and newsletters for it's members Now the real test is, are there any success stories? Nonverbal autism means that the individual with autism is unable to speak. Either the autistic person cannot physically say any words, or they can't functionally talk to other people. Nonverbal individuals often make sounds or babble, but they are unable to mimic or repeat words. ~Therapist find music experiences that strike a chord with a person, which helps build trust and makes a connection between the therapist and the individual. It promotes music therapy through social media and television. What is Music Therapy? What is Non Verbal Autism? Music Therapy By: Autumn Sidesinger ~Music Therapist can help build skills, lower anxiety, and even develop new communication skills. It was founded in 1998 Music therapy: The use of music in therapy; the therapeutic use of music. There are many different definitions of music therapy ranging from the trivial (a form of distraction that uses music as an aid to relaxation) to the lofty (the prescribed use of music to restore, maintain, and improve emotional, physical, physiological, and spiritual health and well-being). (2) ~Music Therapy can help people with autism improve in not only communication skills, but social skills, sensory issues, behavior, cognition, motor skills and self determination. Their Music Therapists work in several locations throughout Pennsylvania including: Harrisburg, Carlisle, Camp Hill, Mechanicsburg, Lebanon, Lancaster, Hummelstown, Hershey, York, Williamsport. Kyle Coleman is his name, at the age of 25 he has only ever spoken a few word and never completed a full sentence. But now is recording songs for charity, in perfect pitch. He is the first non-verbal autistic to do so. It wasn't until 2009 that his mom decided to take him to Cornwall Music Therapy Trust. Instantly it showed his interest in music. He could recreated his favorite songs on the keyboard with no prior knowledge. He since then recorded 9 covers, including his favorite song "Monday, Monday" by Mommas and Papas. Now he is record an album for charity and it will be released on World Autism Day. His song are available on iTunes. Information from 1.)About.com Autism Spectrum Disorder 2.)medterms.com Definition of Music Therapy ~A local music therapy center is Living Unlimited out of Harrisburg Pa. Information from About.com Autism Spectrum Disorder ~Although some people with autism do suffer from apraxia of speech. Because Music Therapist like all therapist focus on the special needs of each individual. http://www.thesun.co.uk/sol/homepage/features/4180391/.html ~A nationally known center is The Rebecca Center out Molloy College in Rochester, NY. Information from About.com Autism Spectrum Disorder ~25% of people with autism are considered Non-Verbal ~So music therapy is a technique of using interaction with music to help autistic people with cognitive and emotional challenges to improve ability to function. "A 'MUTE' autistic man trapped in a world of silence has stunned the music industry by recording a charity album with a pitch-perfect SINGING VOICE." 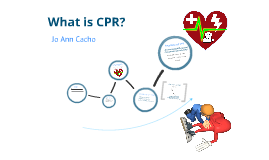 Transcript: What is CPR? http://www.cprdude.com/cpr-adult.shtml http://kidshealth.org/kid/watch/er/cpr.html General Steps of CPR? What is CPR? General steps of CPR Importance of CPR What is CPR? 1. Check the Scene 2. Check the Victim 3. Call for HELP! - Call 9-1-1 Importance of CPR It serves as basic life support You can save someone's life! How to perform CPR? What does CPR stands for saving a life!! So just remember 1-2-3 ABC to save a life! Thank you! Airway – head tilt, chin lift Breathing – look, listen, feel Circulation – give chest compressions Main Points Resources CPR stands for Cardiopulmonary Resuscitation reviving the heart and lungs Jo Ann Cacho 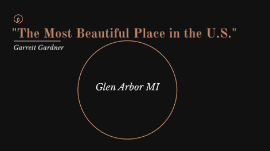 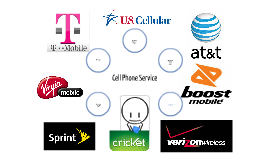 Transcript: Cell Phone Service Are you getting the best deal out there for you? What kind of phone do you want? How much do you want to spend? What carrier? Will your phone need any special services? 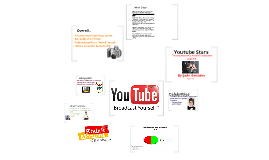 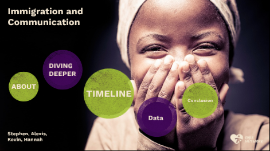 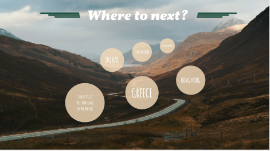