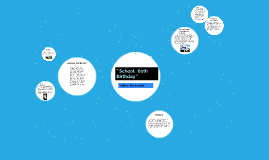 Transcript: It´s beginnings: School begins its activities with two small dining rooms garden. In the early days, five teachers also perform all necessary for the operation of the school, such as cleaning, preparation of teaching materials and procurement activities. In 1958 the school concretization is processed and before long the first two lots of land on Jorge Bell are acquired. On November 28, 1959 the ceremony of laying and blessing of the foundation stone of the new building, on the diagonal Jorge Bell is performed. On 5 May 1962 the mast of the school is inaugurated. Godmother of the event was Ms. María Haydee Bonfiglio of Coudannes and receives the blessing of Father Blas Marsiscano. School Insituto José Manuel Estrada: On May 14, 1956 , united by apostolic ideals and inspired by the philosophy of José Manuel Estrada, the ladies Misses Celina Fernandez , Ines Alvarez , Emilia Castro , Susana D ' Elia and Haydeé Bonfiglio founded the first Catholic and private schools in City Bell. Located in the street Cantilo City Bell. In 1914, Father Kentenich founded the Apostolic Movement of Schoenstatt Movement Church as the religious and moral renewal of the world " School 60th Birthday " Movimiento Apostólico de Schönstatt: Born on November 18, 1885, in Gymnich, Cologne, Germany. Admitted to an orphanage from nine to fourteen. 1904 enters the novitiate of the Pallottine Fathers, with the weight of his fragile health and after going through acute crisis of faith, he is ordained a priest on July 8, 1910. Appointed a year later spiritual director of seminarians, find the appropriate field renovadoras to apply their pedagogical ideas that enhance the struggle for true freedom, self-education, strong and constant work in the formation of personality, under the protection of Mary. The educational project is always evolving, aspiring to overcome, calling for the participation of families and aspiring to be a particular educational support to promote family culture. The institution longs to become a living spirituality and pedagogy of Father Kentenich in the context of educational services provided in this locality presence. Progress in the school: On May 8, 1965 the new classrooms were opened during the same year the efforts to incorporate the midlevel start The school offered two modes: Bachelor of Arts with humanistic and Commercial High School. In 1970 he graduated the first class of students in the Bachelor of Letters and the following of the Commercial High School the first year. In 1981, on the Occasion of the first 25 years of life of the school, the Mayor of La Plata sanctioned a decree imposing the name of the illustrious educator "Jose M. Estrada" to 5th Street City Bell, on the 87th anniversary of his death. In 1991, the school takes a fraction of land boundary to the original house where a chapel dedicated to Our Lady of Schönstatt is built, On 18 December 2001 the educational community totals more than 1,000 students, 600 families and more than 150 people working in three locations. Joseph Kentenich : Father Kentenich: "Father Kentenich" Father Kentenich lived two world wars and was taken prisoner by the Gestapo in the Dachau concentration camp from 1942 to 1945. During these years the Movement strengthened and acquired in the test, progressive strength and autonomy. Between 1947 and 1952 he toured Africa and America. Its purpose was to spread the foundation beyond the boundaries of Germany and Europe Relations: 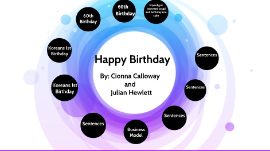 Transcript: Happy Birthday By: Cionna Calloway and Julian Hewlett On korean birthdays orean people usually eat Miyeokguk(seaweed soup).Miyeokguk can be eaten with Meat, seaweed and soy sauce.Miyeokguk is great for mothers that have recently gave birth.Korean people also eat birthday rice cake.There are many rice cakes such as steamed white rice cake,red bean rice cake, and rainbow-colored rice cake. Miyeokguk(seaweed soup) and birthday rice cake Miyeokguk (seaweed soup) and birthday rice cake 60th Birthday Korean people count their names by era. There are 60 names of a year, so the same name is repeated every 60 years. "Hwangap" means your same birthday year returns after a 60 year cycle. So your birthday is more of importance once you completed a full cycle. There are two types of calendars that affect a korean persons birthday you have Lunar and Solar calendars. If you have a birthday on a lunar year than your birthday date is different every year. Because it follows the moon cycle around the earth not the sun. The months are shorter in a lunar calendar and it changes. 60th Birthday Yes, the 60th birthday is important, but one of the most special korean birthdays are their 61st birthday. This shows that a person has completed a cycle of 60 years like I stated in my last bubble. So when you have turned 61 its like having another first birthday because you just started another cycle. Koreans hold huge parties for the guest of honor brinnging their favorite foods. 60th and 61st Birthdays 60th Birthday Dol in korean means First birthday of baby. In korean tradition doljanchi is a party to celebrate a baby's first birthday. Doljani is for baby's that are not sick and grown up well. Family all gather at this party to celebrate the 1 year the child has been alive. The child is given a ring that is menat to give the child a long lasting life. Koreans 1st Birthday Korean 1st Birthday At the table there are lots of rice cakes this is to wish the baby good health. Each item on the doljabi( the gift table) has it's very own special meaning. If the baby grabs a string that means he/she will have a long lasting life. If the baby grabs the money thats means the baby will become rich. If the baby is to grab the pencil that means the baby will become a scholar in the future. On the Dol table there are many gifts and foods for the baby to choose from. Koreans 1st Birthday Koreans 1st Birthday Sentences Sentences Business Model Sentences Sentences Sentences Sentences Sentences

Transcript: Through the Years The Couple Always worked well together who did it better Family Always the joker The very first audition for the Birds Experimenting Watch out for that tree Jive Ho! WHAT Sound of music here I come Lets see that again Birthday's Past Volunteer Lives were touched Mother of Many Note the outfit...NICE Wonder how late she was to get this cabin?? Man of many Hats Our life saver Great Cheif If you have not see this... the night is still young! Monkey around Friends Vacations I hope this is not the best view Christmas Happy 60'th Mom and Dad Double click anywhere & add an idea 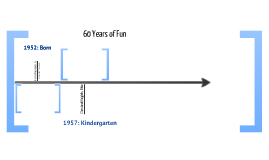 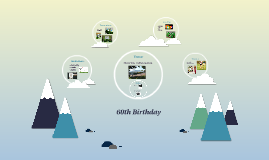 Transcript: 59 38 10 52 25 performances of "Hey, Hey We're the Monkees" terrific mom-in-law to 2 lucky ducks Susan Carole Currie a glimpse through the years... number of Hallmark movies watched every Christmas age you became "nana" years it took to get a new kitchen 30 https://www.dropbox.com/lightbox/home?select=Nana%27s%2BBirthday.mp4 43 54 8 superstar mom to 3 brilliant kids number of years you've known your high school stud muffin 3,600 hours spent at sporting events and practices times per year the table decorations change years of wedded bliss to the man of your dreams 60 blessed years Happy Birthday, Mom! 41 hours spent watching the Republican National Convention on your honeymoon Happy 60th Birthday Mom! 6 2 years of paradise on Perry Lake Road 55 33 47 appearances by Mr. Smiley times Scott passed gas on the aforementioned trip from Ortonville to Denver 27 36.5 20 42 loving wife to one super husband 37 years at Maranatha age you started coloring your hair age you were warned that Glen Currie was a nose picker 11 number of trips to Bob Jones University 16 4 number of times you impersonated the wicked witch number of giggling...accidents 9 attempted plantings of rhododendrons number of band concerts, recitals, and performances you attended 26 60 55 MPH: Speed at which the Dodge Caravan's doors would fall off. years celebrating our World Series Champs 59 total days spent in Gatlinburg, TN 46 23 number of eye rolls after referring to Mr. Smiley owner of 34 Easter bunny figurines times per year you hear dad say, "There's Camp Nahelu!" 17 recipient of 6 birthday roses from Calvin 19 and 5 goofy grins from Max cumulative number of 11 trips to D.C. & Virginia Beach 39 eating "Papa salad" 52 times a year 21 50 3 51 trips to the "promised land" of Silver Lake age you retired from teaching 34 29 1 49 fluid ounces of Whoppers replaced by urine at Camp CoBeAc 44 18 years of Ronald Reagan and a lifetime with his most loyal follower 57 58 age you received your driver's license miles driven round trip to FBS for 11 years for a total of 81,500 miles total pounds of baby carried over 120 weeks spectacular mom for 36.5 years 28 number of linen napkins soiled to clean up Scott at Zenders A few words from the boys... number of times you were subjected to Zender's liver pâté and boxed mashed potatos 53 voter in 10 presidential elections 48 number of times you told Scott to slow down between Iowa City and Cheyenne 7 beloved nana to 4 wiggly boys 1954: year you were born and the same year the U.S. began vaccinating against polio Sanford and Son episodes watched with Scott in the summer of 1999 22 45 waiting in the car 7 times (and on Kristin's 7th birthday) when dad ran out of gas on the road number of times you turned up the radio to hear a sousa march Mike and Mike episodes watched with Scott in the summer of 2007 18 feet: the length of the camper we lived in at Maranatha for 5 months 32 (million) boxes of crafts 40 13 adventurer (and user of a squatty potty) for 17 days in China 14 5 total hours spent creating JibJabs of the boys 22.5 32 12 36 hours of travel to see the Fab Four 24 15 survivor of 43 near-death experiences 35 31 loving and cheerful teacher for 15 years 56 blissful hours spent packed into a Dodge Caravan on our non-stop drive from Ortonville to Denver baker of 53 batches of the best chocolate chip cookies ever number of boys' sleepovers at nana's house 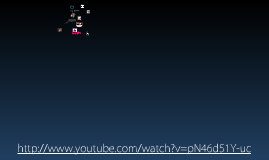 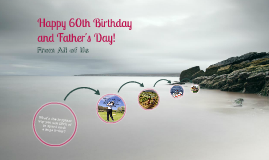 Transcript: All while staying in a 4 bedroom cabin from June 26th to June 30th... filled with all your favorite people? How about winery tours by bike? Golfing on the lush green grass of Michigan's Upper Peninsula? What's the happiest way you can think of to spend such a huge b-day? From All of Us Boating on Traverse Bay? Happy 60th Birthday and Father's Day!