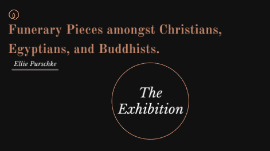 Transcript: Funerary Pieces amongst Christians, Egyptians, and Buddhists. Ellie Purschke The Exhibition A look into different culture's funerary related works Christianity Christian catacomb paintings often times combined the themes from the old testament and the new testament. The Good Shepherd, the story of Jonah, and orants, frescoed ceiling of a cubiculum in the Catacomb of Saint Peter and Marcellinus, Rome, Italy, early fourth century. Catacombs were renowned for housing the bodies of Christians. Catacomb of Commodilla, Rome, ca. 370-385. Depicts Greco-Roman myths Via Dino Compagni Catacomb, Rome, ca. 320-360. This is from the byzantine period in Egypt. These were used as permanent monuments for the deceased. Funerary Stele with Architectural Frame, 6th- 7th century, Egypt, Limestone. This piece came from and Christian Egyptian tomb Figure of a Woman, 5th century, Egypt, painted plaster. Ancient Egypt These three pyramids took the shape of the ben-ben, which was the emblem of the sun God, Re. The sun’s rays were used as a ramp for the Egyptian kings to rise to the heavens after their death and rebirth. Aerial view of the Fourth Dynasty pyramids (looking north), Gizeh, Egypt. From bottom: pyramid of Menkaure, Ca. 2490-2472 BCE; pyramid of Khafre, ca. 2520-2494 BCE; and Great Pyramid of Khufu, ca. 2551-2528 BCE. Hatshepsut was the first great female monarch whose name is on record. She ruled for twp decades. Mortuary temple of Hatshepsut (looking southwest), Deir el-Bahri, Egypt, 18th Dynasty, ca. 1473-1458 BCE. Many painted limestone reliefs were located throughout Hatshepsut’s temple that depicted images that celebrated her reign, her celestial birth, and her successful expedition to the kingdom of Punt on the red sea. King and queen of Punt and attendants, relief from the mortuary temple of Hatshepsut, Deir el-Bahri, Egypt, 18th Dynasty, ca. 1473-1458 BCE. Painted limestone, 1’3” high. Egyptian Museum, Cairo. The scene displays the apex of the passage to the afterlife. Nany is in the Hall of Judgement. Book of the Dead for the Singer of Amun, Nany, third intermediate period, Dynasty, 1050 BC, Egypt. The model of a bakery and brewery was found by archaeologists in a hidden chamber in the tomb of a royal chief steward Meketre. Model Bakery and Brewery from the Tomb of Meketre, reign of Amenemhat, I, 1981-1975 BC, Egypt. Buddhism A theory of the use of this urn is that it could have potentially been used to serve as an eternal residence for the soul of the deceased. Funerary Urn (Hunping), Western Jin dynasty, 265-316, China, Stoneware with olive glaze The Great Stupa is located at one of the most important Buddhists sanctuaries that had been founded during the reign of Ashoka. East torana of the Great Stupa, Sanchi, India, mid-first century BCE to early first century CE. Sandstone, 34’ high. A chaitya is a Buddhist shrine or prayer hall. Interior of the chaitya hall, Karle, India, ca. 50 ce. Rudiments of the Buddhist decorative grammar appear. Jar, Northern Qi Dynasty, 550-577, late 6th century, china, Earthenware with relief decoration under an olive green glaze. The lion has its fangs and claws exposed and is in a position to pounce. Guardian Lion, Northern Qi dynasty, 550-577, China, Limestone. 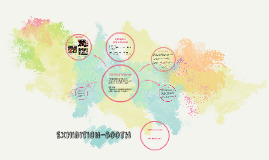 Transcript: PHOTOS: Key Concepts Thank You for listening! Ecclesiastes 12:13 "Fear God and keep His commandments, for this is the whole duty of man" 1. I've always wanted to help those who have less/those in poverty 2. Education is something that I enjoy and that I can do 3. Technology is a resource that advances and helps education -I'm passionate about these topics -I mostly direct it towards those who are in poverty and don't have this resource Central Idea: "Technological advancements in education provides opportunities for children." GOD BLESS YOU! Bake Sale-Fund raising Action BCWV-Biblical Christian Worldview EXHIBITION-booth Visiting the kids Education & Technology 1. The understanding of the advancements on technology impacts education positively and negatively 2. Technological advancements change the way education works 3. Our responsibility is to provide and promote positive education Connecting to technology: -Giving them a computer, putting educational learning systems so that they can learn from technology -Teaching them what I've written in the computer while I'm visiting;leaving it with the instructor so that she can teach them continuously -Preparing a kit for them (books, pencils, stationary, etc.) using the money I've raise I chose this verse because as more work comes, I need to remember that my main goal is to follow the Lord. 1. Line of Inquiry #1 - Form 2. Line of Inquiry #2 - Change 3. Line of Inquiry #3 - Responsibility Interview with Mr. Gregg Reasons for topics: Lines of Inquiry 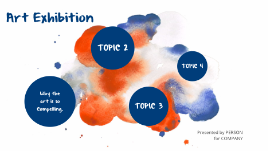 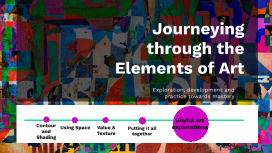 Transcript: Journeying through the Elements of Art Exploration, development and practice towards mastery Contour lines & shading Drawing detailed realism Contour and Shading We went deeper in technique in exploring perspective and observing details. Our artists took on quiet observations of anatomy, color, placement as well as finding consistencies and variances in landscape and figure drawing. We found a lot of inspiration in our Arizona quest, examining the plant and and animal life of our state. Perspective and Illusion Positive, Negative and 3 dimensional space Using Space The learners used specific techniques to create depth and dimension in their drawings. Through the use of negative and positive spaces they studied deeper into concepts of form as well as the beginnings of spacial design concepts. Balance and rhythm or direction and how those guide us in creating a composition, introduce learners to basic design elements. Practice in our landscape drawings helped to support these art elements. Implied and Realistic Texture Drawing to share information Value & Texture Our young artists reflected on what they want to say in their drawings. What do we want the viewer to know? How do we share information without words? Through the use of texture and value we learned that we can say so much about what we're sharing, how it feels and even reveal details of translucency, amount of light (what time of the day is it?) and even perspective. Exploring Portraiture styles Combining lessons of line, form, values and texture in portraiture Putting it all together During our virtual classes we were able to use our observational skills to learn more advanced skills in proportion, shading and rendering texture in portraits. We also explored different styles in realism (Kehinde Wiley, Amy Sherman, Frida Kahlo) and in animation and how even cartoonist's work is deeply rooted in the techinical aspects of facial anatomy and the physics of how light interacts with shape and form. As we continue to explore visual storytelling, we're beginning to use symbolism as part of creating more meaning in our work. Just for fun.... Joyful art explorations From mask design to one line drawing challenges and reimagining the ordinary still life, our young artists continue to find joy in their own imagination as they create! 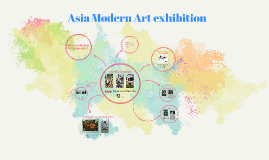 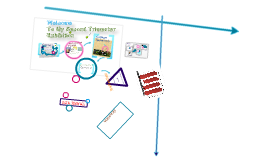 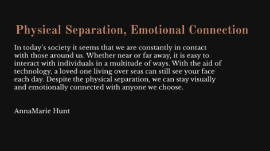 Transcript: Physical Separation, Emotional Connection In today’s society it seems that we are constantly in contact with those around us. Whether near or far away, it is easy to interact with individuals in a multitude of ways. With the aid of technology, a loved one living over seas can still see your face each day. Despite the physical separation, we can stay visually and emotionally connected with anyone we choose. AnnaMarie Hunt Eagle Head Winslow Homer 1870 Located in the MET White Ordinary Alexander Calder 1976 Located in New York City. The Calder Foundation Untitled Wassily Kandinsky 1941 Private Collection Bird In Space Constantin Brancusi 1923 Located at the MET Composition II in Red, Blue and Yellow Piet Mondrian 1929 Located at the National Museum in Serbia The Deep Jackson Pollock 1953 Centre Georges Pompidou, France Untitled Alexander Calder 1934 Located at the Calder Foundation, NYC Morning Sun Edward Hopper 1952 Columbus Museum of Art Small Worlds VII Wassily Kandinsky 1922 Located at the Stadtisch Galerie im Lenbachhaus White on White Kazimir Malevich 1918 Located at the MoMA Girl With Tear III Roy Lichtenstein 1977 Located at the Beyeler Foundation, Basel.