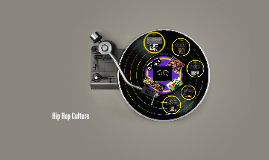 Transcript: Breaking, also called B-boying or breakdancing, is a dynamic style of dance which developed as part of the hip hop culture. Breaking is one of the major elements of hip hop culture. Like many aspects of hip hop culture, breakdance borrows heavily from many cultures, including 1930s-era street dancing,[84][85] Afro-Brazilian and Asian Martial arts, Russian folk dance,[86] and the dance moves of James Brown, Michael Jackson, and California Funk styles. Breaking took form in the South Bronx in the 1970's alongside the other elements of hip hop. The relationship between graffiti and hip hop culture arises both from early graffiti artists engaging in other aspects of hip hop culture, Graffiti is understood as a visual expression of rap music, just as breaking is viewed as a physical expression. The 1983 film Wild Style is widely regarded as the first hip hop motion picture, which featured prominent figures within the New York graffiti scene during the said period. Rapping (also known as emceeing, MCing,spitting (bars),or just rhyming refers to "spoken or chanted rhyming lyrics with a strong rhythmic accompaniment". It can be broken down into different components, such as “content”, “flow” (rhythm and rhyme), and “delivery”. Rapping is distinct from spoken word poetry in that is it performed in time to the beat of the music. DJing Turntablism is the technique of manipulating sounds and creating music using phonograph turntables and a DJ mixer. One of the first few hip hop DJs was Kool DJ Herc, who created hip hop through the isolation of "breaks" (the parts of albums that focused solely on the beat). In addition to developing Herc's techniques, DJs Grandmaster Flowers, Grandmaster Flash, Grand Wizard Theodore, and Grandmaster Caz made further innovations with the introduction of scratching. Hip Hop Culture Beatbox Beatboxing, popularized by Doug E. Fresh,[87] is the technique of vocal percussion. It is primarily concerned with the art of creating beats or rhythms using the human mouth.[88] The term beatboxing is derived from the mimicry of the first generation of drum machines, then known as beatboxes. As it is a way of creating hip hop music, it can be categorized under the production element of hip hop, though it does sometimes include a type of rapping intersected with the human-created beat. Breaking MCing Graffiti 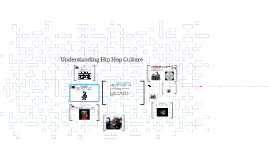 Transcript: The two record companies hosted the feud that ended with the death of Tupac Shakur and Notorious B.I.G. Understanding Hip Hop Culture Label A&R Sean Puffy Combs was fired from his position leading him to create his own independent record company. Hip Hop is a cultural movement that formed in the late 1960s among African Americans in South Bronx, New York City. Tupac Shakur Planet Rock The Sound NWA was a west coast rap group founded in South Central, California. Roland TR- 808 East vs West Welcome to the South Run DMC would be the breakthrough of Hip Hop's commercial success after collaborating with Aerosmith. Meets DJ Jazzy Jay who teaches him about hip hop production Hip Hop Music now is very commercial I Need A Beat! The first song to include rapping over an originally produced sound . The Battle Mentality Hip-Hop is the hunger games of the genres. MCs compete for the title Best MC/Rapper alive/ever. This is shown through the bodacious lyrics, videos, and lifestyle that artists live and create. It is the fuel behind every rappers career. Graffiti The subculture surrounding graffiti has existed for several decades, and it's still going strong. The graffiti artists (or "writers" as they prefer to call themselves) are passionate, skilled, community-oriented, and socially conscious in ways that profoundly contradict the way they've been portrayed as common criminals and vandals. Referred to as "tagging" Is used by gangs or other graffiti artists to mark territory in an artistic matter by drawing or writing words, pictures, or murals on buildings, trains or cars. This also began in the Bronx. Funk music was very popular at the time, however popular Djs around town would loop certain parts of popular records to create their own. After the huge success of N.W.A , Dr.Dre created death row records with ex football player Suge knight Beat Boxing Beatboxing is the term used to describe the practice of humans using their voice (including lips, tongues and mouths) to produce vocal imitations of percussive instruments. These vocal imitations are then strung together in order to produce beats, rhythms or melodies in music. Came from Indian Bol music. Bol is a form of music that included the use of vocal imitation in the use of rhythmic patterns. It is also thought that traditional music of Africa has influenced the development of beat boxing, where it is common to use the body. (ex. Stomping feet or clapping hands) to create rhythm. Derived in 1980s. First beat boxer "the human machine" Doug E. Fresh. DJ Afrika Bambaataa and the Soulsonic Force What is Hip Hop Creating Def Jam Straight Outta Compton The earliest traces of hip hop can be found in the recordings of the "The Last Poets" in 1973. Russell Simmons was a drug dealer in Queens , however managed acts like Kurtis Blow, and Run DMC. Music Now First Popular dance of Hip Hip was Break dancing. B-boying or breaking, also called breakdancing, is a style of street dance that originated among African American and Latino youth, many former members of the Black Spades, the Young Spades, and the Baby Spades during the mid 1970s The rap group intended to express what was happening in throughout their neighborhoods through their voice in music. Rick Rubin initially wanted to start a punk rock band while attending NYU. DJ Kool Herc is credited as the creator of the early sound of hip hop. He would take popular records from the time and play them on his turntables with his own twist. Alot of the production now is creating using production software such as Fl Studio and Log DJ Kool Herc Beat Boxing NWA Fashion In 1981 , DJ Afrika Bambaataa released a record titled "Planet Rock" Hip hop/rap fashion, also known as urban fashion, is a distinctive style of dress originating from African American youth. in the popular cities such as: New York City, Los Angeles, Houston, Chicago, Philadelphia, the San Francisco Bay Area, Detroit, Memphis, Virginia, Atlanta, and St. Louis among others. Each city contributed various elements to its overall style seen worldwide today. Hip hop fashion complements the expressions and attitudes of hip hop culture in general. Run DMC The Last Poets Russell Simmons and Rick Rubin Practices and Traditions The Culture emerged from the popularity of block parties in New York. Break Dancing 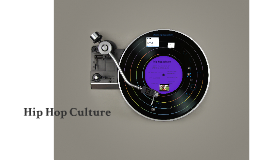 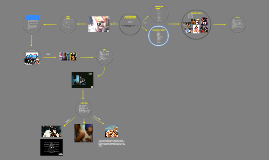 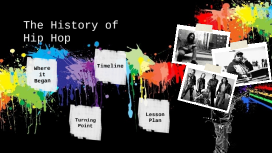 Transcript: The History of Hip Hop Where it Began The South Bronx 1970's White Flight Urban Decay Poverty Local Government Corruption White Flight Synopsis Simultaneous with the “white flight,” social and economic disruptions abounded. Construction on the Cross Bronx Expressway, which began in the postwar period and continued into the early 1970s, decimated several of the minority neighborhoods in its path. City infrastructure was allowed to crumble in the wake of budget cuts, hitting the less privileged parts of the city most directly. Strikes organized by disaffected blue-collar workers crippled the entire metropolitan area. As a largely white, middle-class population left urban areas for the suburbs in the 1950's and 1960's—a phenomenon known as “white flight”—the demographics of communities such as the Bronx shifted rapidly. The Bronx, one of New York City’s five “boroughs,” became populated mainly by Blacks and Hispanics, including large immigrant populations from Caribbean nations including Puerto Rico, the Dominican Republic, Jamaica, Barbados, Trinidad, and Tobago, and others. Groups Turning Point Turning Point Music Culture Dance Music Music Latin and Caribbean traditions met and mingled with the sounds of sixties and seventies Soul, Disco, and Funk. Limited access to instruments and music education, music makers made music with what they could find. DJs assembled their own sound systems and built extensive record collections by searching secondhand stores for old Soul, Funk, and Rock and Roll albums; they used their collections to provide entertainment within their communities. Sounds taken from these records—from James Brown’s drum breaks to Parliament Funkadelic’s funky bass lines—provided the raw materials for creative work: beats to be mixed and modified. B-Boy and B-Girl Break Dance Dance Breakdancing is thought to be inspired by the performances of James Brown. DJs would take the breaks of dance records and string them together to give dancers a chance to show off their moves. Breakers would choose elements from sports and other dances, including gymnastics, the Lindy Hop, capoeira, and disco. Timeline Timeline 1974 1970 1976 1975 Other DJ's start playing in similar styles. DJ Pleaser Lovebug Starski first refers to this movement as “hip-hop.” Hip Hop First Appears in the Bronx DJ Afrika Bambaataa battles Disco King Mario in the first DJ battle. 1973 1978 DJ Grand Wizard Theodore invents the record scratch. DJ Kool Herc deejays his first block party in the Bronx The music industry first uses the term “rap music,” which shifts the focus in hip hop from the deejays to the emcees. Lesson Activity Lesson Plan Open up Schoology and reply to the discussion question labeled: Discussion: ABC News Clip You must reply to this question and respond to at least one classmates post. 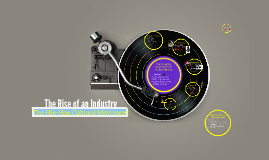 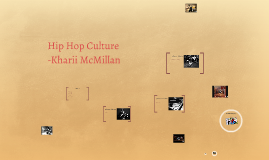 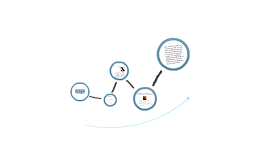