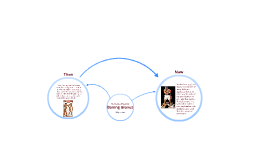 Transcript: Now Modern boxing gloves may be constructed of many different materials. The outer cover may be made of top-grain leather or synthetic like leather. Most gloves are lined with cotton material and hand stuffed with sturdy foam or wool blends to get more protection. The Change of Material: Boxing Gloves The earliest evidence of boxing dates back to Egypt around 3000 BC. The sport was introduced to the ancient Olympic Games by the Greeks in the late 7th century BC, soft leather straps were used to protect the boxers hands. Abby Moore Then 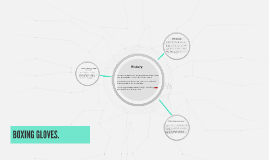 Transcript: Variations Speed gloves are relatively light vinyl or leather mittens primarily designed to protect the athlete's hands against scrapes. Bag gloves are cushioned to protect the athlete against the heavier focuses of striking other punching bags. Sparring gloves are designed to protect both athletes during practice bouts. Professional fight gloves are also designed to protect both athletes, but are generally less padded. The use of hand protection in fighting contests undertaken for sport has been known since at least Ancient Greece. In Ancient Greece, it was common practice to tie strips of leather round the hands for protection. The modern padded glove owes its origin to Jack Broughton, who created a form of boxing glove History BOXING GLOVES. Impact of gloves on safety and injuries Gloves reduce the amount of cuts caused. Gloves increase brain injuries, fighters wearing gloves are able to punch harder to the head. Gloves reduce amount of eye injuries. Modern boxing gloves started showing up towards end of the 1990s. Gloves used in amateur boxing, help judges more easily see and record points. Modern boxing gloves include breathable mesh palm technology with some suspension cushioning and re-enforced padding for the boxer. Modern boxing equipment 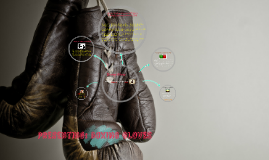 Transcript: Science: How they physically or psychologically affect people when watching or participating. Technology: Different materials were used into the making of each different boxing glove. Engineering: We have made different layers and improved upon each one. Math: We needed to measure the dimensions of the glove, as well as the weight and the height. Boxing Gloves impact us today Presenting: BOXING GLOVES BY: Kevin rowland and Bishop nance Boxing Gloves In modern days boxing gloves impact in a positive\negative way. Positive: it can protect the person's hands when they swing at a person or object. The boxing glove provides the person wearing it to teach themselves and practice self-defense or entertainment when boxer fight with boxing gloves. Negative: Injuries somehow gained from participating in boxing that can affect the person later on. How Boxing Gloves are involved with Science, Technology, Engineering and math (STEM) Boxing gloves have changed the way of not killing someone in hand-to-hand combat and to protect their hands. They are also fashionable too, they come in different colors and design if you want some on your boxing gloves. In the old days we killed people for entertainment, now we just knock people out for sport and to learn self-defense. This has made humanity to be more defensive and efficient in close combat. The reason why boxing gloves are made so boxers won't have to fight bare handed so it can protect their hands and knuckles from getting injured when they are punching a punching bag. In boxing matches the opponent will get less hurt from a swing because of the boxing gloves, they can be hard or soft, light or heavy but have no chance of killing their opponent, they will just get knock out. (K.O.) The purpose of using Boxing Gloves The Evolution of Boxing Gloves Boxing Gloves Change Humanity In 1743 the inventor of the modern boxing glove was Jack Broughton, a bare-knuckle champion. Before Broughton's glove was invented, the ancient Greeks and Romans made their own gloves but they were used to kill, not knock out. The Greeks had leather straps to wrap around their hands, but later fitted them with spikes AKA brass knuckle, and/or blades. The Romans used a similar glove called the Cestus. (basically they are leather gloves with metal plates) But now our modern day boxing gloves are made of leather, cow or goat hide and plastic as well. Thank You for Your time! 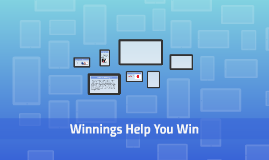 Transcript: Obviously the boxing gloves will be used by boxers when they train and spar . Fighting in them only if you are professional . There are boxing gloves , and then there are winnings . Winnings protect your hand like no other glove . They feel as if they were made for your hand even you wear them for the first time so there is no need for fitting . They feel like they don't weight thing , and they will prevent injury . Every other glove I've worn never actually protected my hand and I always hurt my hand because the glove didn't have good protection . Winnings Help You Win Some Facts What are Winnings ? The cost will vary on the size of the gloves . 16oz will cost 350 14oz will cost 325 12oz will cost 300 Cost of product They are made in Japan . Professional boxers like Mayweather wear these gloves . Usage 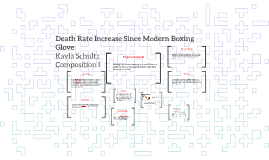 Transcript: According to healthresearchfunding.org, fifteen to forty per cent of ex boxers at any given time have been found to have symptoms of chronic brain injury. Death Rate Increase Since Modern Boxing Glove Kayla Schultz Composition I This image shows a blow to the head and how the brain moves inside the body Although the modern boxing glove was invented to soften the blow to the opponent, death rates have increased since then. Brain Damage Invention Deaths One study from a few neurosurgeons from the University of California suggested that there have been 339 deaths in professional boxers between 1950 and 2007. History There have been many variations of a boxing glove since the modern invention. At first, fighters only wrapped their hands in leather as protection. Later, the Roman's hardened the leather, turning the glove into a weapon. Sometimes adding iron and brass studs. They would also sometimes attach a large spike called a myrmex. When Broughton had the modern glove in mind, he did not suspect that there would be an increase in injury. Broughton had the idea that the modern boxing glove would better protect the fighters hand and wrist from injury, and would soften the blow towards an opponent. Intention The modern boxing glove was invented in 1743 by Englishmen Jack Broughton. Ever since then, the glove has evolved. Leather is imported from a tannery, cut up into glove shaped pieces, sewn together inside out, then filled with the padding. (Padding depending on weight class) How It's Made Boxing gloves. (n.d.). How products are made. Retrieved from http://www.madehow.com/Volume-6/Boxing-Gloves.html Magraken, E. (2015). Combat sports law. Number of bouts and years fighting related to reduced brain volume in boxers and mma fighters. Retrieved from www.combatsportslaw.com/category/safety-studies/ References Farrier, J. (2010). Neatorama. Retrieved from http://www.neatorama.com/2010/07/04/bare-knuckle-boxing-is-actually-safer-than-using-gloves/ Surprise Reversal 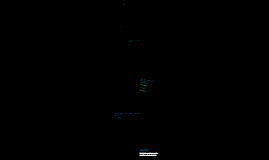 Transcript: boxing gloves history of the inventor of modern boxing was a english campion named jack broughton at first he made boxing gloves just to train at his time the still fought with bare knuckles boxing gloves first leather arrives from tannery in large pieces leather shell is sewn inside out entire glove is turned right side out the last peice to be stitched to the glove is the cuff A single thin strip of leather is folded over the open edge of the cuff and the lace area and is stitched in place to finish the glove what technology is used in order to make the product sewing machine what raw materials are used in the manufacturing tanned leather padding nylon tafetta what occupations are associated with this product boxing sources http://www.madehow.com/Volume-6/Boxing-Gloves.html How are made boxing gloves 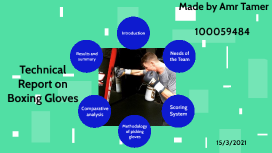 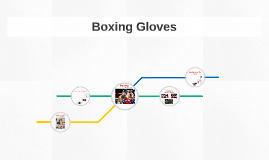