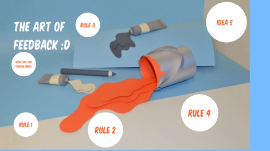 Transcript: THE ART OF FEEDBACK :D what are you talking about what are you talking about! Learned this Feedback Model in Wilderness setting SUBTOPIC 1 Feedback was ceremonial TEXT TEXT PICTURES PICTURES Participated twice a week SUBTOPIC 2 TIMELINE 2017 TIMELINE MAP MAP CHart Label 1 Label 2 Label 3 Label 4 CHart Or the person sharing feedback should ask permission first Feedback must be requested Rule 1 Theory= Receptiveness makes feedback easier to apply Feedback must be balanced rule 2 Strengths and "growths" Even in specific instances, find positives! "Am I sharing this feedback from a supportive place?" Feedback must be unbiased and supportive rule 3 Feedback must be specific rule 4 "YOU'RE A JERK" ineffective "I'd prefer you didn't call me birdbrain" SPECIFIC MEASURABLE ACHIEVABLE REALISTIC TIMELY GOALS If it fits let it sit IF IT DOESNT APPLY LET IT FLY idea 5 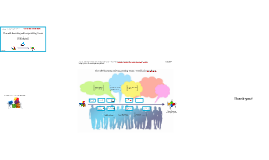 Transcript: Useful Rules & Mindsets for Feedback Advanced IT-Project-Management (PM101) Summer Term 2017 (Fiebeler/Samberg/Husmann/Wojcieszak/Weßels) Group 4, Team G, “Self-Organizing Teams” Wiki Norway Argentina How to give & get Feedback Focus on Objective. Relay what you see, Not what you believe or assume. Feedback should be neutral, Not judgemental. Focus on behavior not their personality. Getting Feedback Rules for efficient feedback Netherlands Further general obstacles Communication barriers Conflicts within team Lack of trust Demotivation Unclear roles ... Canada UK Blogs US Cultures are giving feedback in drastically different ways Direct Cultures / "upgraders" "totally wrong", "absolutely unsatisfactory" Cultural differences & feedback The self-learning self-organizing Team - Feedback Roadmap Israel Create an environment where feedback is viewed as an opportunity. Feedback Models: - "what, what and why" - "what and why" Indonesia 19.06.2017 Japan Pairing How to get a self-learning self-organizing Team? Newsfeed Indirect negative feedback Advanced IT-Project-Management (PM101) Summer Term 2017 (Fiebeler/Samberg/Husmann/Wojcieszak/Weßels) Group 4, Team G, “Self-Organizing Teams” Individual obstacles & how to overcome them Germany The self-learning self-organizing Team - FEEDBACK Indirect Cultures / "downgraders" "a little", "a bit", "slightly", etc. "This is just my opinion", "We are not quite there yet" Nigeria 19.06.2017 India Ask help in finding solution to difficulties. Be open to negative feedback. Understand the specific of feedback. Stop avoiding feedback. China Ghana Feedback as chance for improvement Individual obstacles Unclear goals Individual focused on themselves and not the team Lack of information's Specific and Clear. Appropriate Time and Place. Utilize Tools. Prepared and Factual Feedback. Positive and Negative Feedback. Direct negative feedback Giving Feedback Mindset for feedback Team Chat Ways of sharing knowledge & how to use them Italy Thailand Thank you! The self-learning self-organizing Team Arabia Feedback for improvement Russia Accept feedback from others. Should ask more questions to get more insight on given feedback. Inform not advice. Be supportive , Not blaming or threatening. Source: The Culture Map by Erin Meyer France Mexico Denmark Direct vs. Indirect negative Feedback 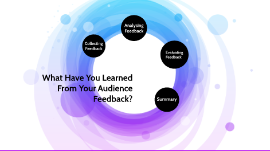 Transcript: What Have You Learned From Your Audience Feedback? Collecting Feedback How Did I Collect My Feedback? I had two ways of collecting feedback Linoit and Survey Monkey. Linoit Linoit Linoit is a interactive postit board that allows multiple users to post sticky notes with comments or pictures to the board. I used this format to get feedback on my first cut. Survey Monkey Survey Monkey Survey monkey is a platform that allows you to make and distribute surveys in a visually appealing manner. It allows you to create several questions and apply different ways to answer said question. I used Survey Monkey when I was getting feedback on my ancillary tasks. Analysing Feedback Analysing My Feedback My first cut has some very valuable feedback about the editing and construction of my video particularly when it came to any errors that I may have missed. The ancillary tasks were rated highly across the board with none of the average ratings being below 70. The 70 was on how well the ancillaries worked with the final cut and as such gave me an area of which i could improve my work. Evaluation On my first cut I recieved generally positive feedback that also had some constructive criticism within it. The aid with spotting errors that I had missed was also very helpful with improving the piece. On my ancillary's I have had good rating of my pieces for not only how well they are constructed but also how well they worked in conjunction with each other. Evaluating Feedback Linoit Negatives Linoit Negatives The negatives of using the linoit are few but major. Such as it being completely anonymous when the when released to a lot of people. This in conjunction with people being able to post and remove anything means the feedback could have very quickly gone sour. Survey Monkey Negatives Survey Monkey Negatives Strengths Weaknesses COMPANY LOGO The negatives of using survey monkey are much less impactful than when using Linoit. The drawbacks are such as the lack of interactivity, the rigid structure of the software and its limitations when it comes to displaying results to the public. As such Survey Monkey offers a more rigid style of feedback that can be very effective. It is also very hard for users to give detail when ansering a Survey Monkey due to its answering methods often being limited. Summary Summary Overall I believe my feedback has been valuable and constructive. The methods I have used to collect this feedback though not perfect were very useful and not abused. I could have also have collected feedback at more points of my coursework such as after my ancillary task drafts. 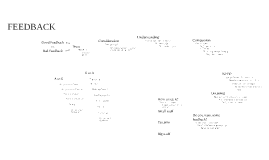 Transcript: FEEDBACK Good Feedback Bad Feedback Builds Erodes Trust Takes Time. Is lost and gained. Consideration Is asking enough? Do I know enough about this person to know how they might feel? Understanding Understand your own motivations. You have to judge! Minimize Assumptions Compassion Give them space. Don't make the little stuff too big. Think through what you're saying. Keep it about the work. WHY? Quality of services... for the consumer! Make a better work environment... for us! Show support to our colleagues. Standardization of practice and skills. Repair. Listening Watch and listen for repairs, not just mistakes. Find the feedback and record examples. Don't just hear the mistakes. Do you want some feedback? Is now the best time and place? Size of the feedback changes everything. Saying no and saving face. How to say it? Look them in the eyes. Show consideration for their response. Small stuff Patterns Big stuff Comprehension of discourse Production of lexicon Composure and Appearance Comprehension of lexicon Structuring space Size / Shape specifiers VS. Fingerspelling Numbers A to E Delivery Composure and Appearance E to A Vocabulary (Lexicon) Production of discourse Grammar Interpreting 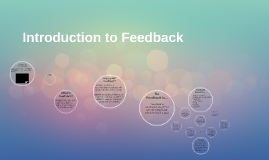 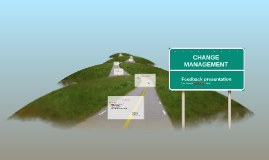 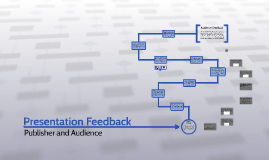