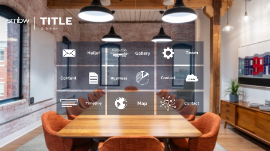 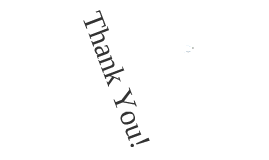 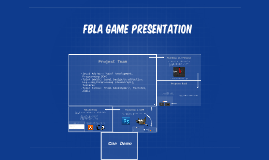 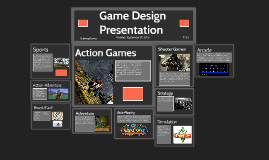 Transcript: The action game is a video game genre that emphasizes physical challenges, including hand-eye cordination. In action games, the player typically controls and avatar or a character. This character must travel through levels, collecting objects, battling enemies, and avoiding various obstacles. At the end of some of the levels, the character will fight a boss. Shooter games are a subgenre of action game, which often test the player's speed and reaction time. It includes many subgenres that have the commonality of focusing on the actions of the avatar using some sort of weapon. Usually this weapon is a gun, or some other long-range weapon. An adventure game is a video game in which the player assumes the role of protagonist in an interactive story driven by exploration and puzzle-solving. The genre's focus on story allows it to draw heavily from other narrative-based media such as literature and film, encompassing a wide variety of literary genres. Nearly all adventure games are designed for a single player, since this emphasis on story and character makes multi-player design difficult. A role-playing game (RPG) is a game in which players assume the roles of characters in a fictional setting. Players take responsibility for acting out these roles within a narrative, either through literal acting or through a process of structured decision-making or character development. Actions taken within many games succeed or fail according to a formal system of rules and guidelines. Usually are one-player games. A sports game is a video game that simulates the practice of sports. Most sports have been recreated with a game, including team sports, Track and field, extreme sports and combat sports. Some games emphasize actually playing the sport (such as the Madden NFL series), whilst others emphasize strategy and sport management (such as Championship Manager and Out of the Park Baseball). Some, such as Need for Speed, Arch Rivals and Punch-Out!!, satirize the sport for comic effect. This genre has been popular throughout the history of video games and is competitive, just like real-world sports. A number of game series feature the names and characteristics of real teams and players, and are updated annually to reflect real-world changes. An arcade game or coin-op is a coin-operated entertainment machine, usually installed in public businesses, such as restaurants, bars, and particularly amusement arcades. Most arcade games are video games, pinball machines, electro-mechanical games, redemption games, and merchandisers. A simulation game or "sim" attempts to copy various activities from real life in the form of a game for various purposes such as training, analysis, or prediction. Usually there are no strictly defined goals in the game, with players instead allowed to freely control a character. Action-adventure is a hybrid genre, and thus the definition is very inclusive, leading it to be perhaps the broadest genre of video games. Typically, pure adventure games have situational problems for the player to solve, with very little or no action. Board/Card Arcade $1.25 Monday, September 21, 2015 Shooter Games Action Games Sports Role Playing Any game played on a board, especially one that involves the movement of pieces on the board, such as chess or checkers. Strategy Game Design Presentation Strategy video game is a video game genre that focuses on skillful thinking and planning to achieve victory. It emphasizes strategic, tactical, and sometimes logistical challenges. Many games also offer economic challenges and exploration. They are generally categorized into four sub-types, depending on whether the game is turn-based or real-time, and whether the game focuses on strategy or tactics. Gaming Genres Simulation A game in which playing cards are used Adventure Action-Adventure 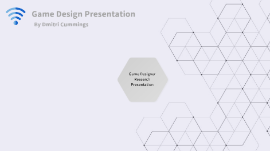 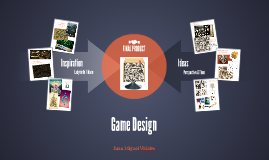 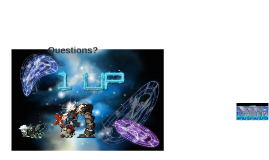 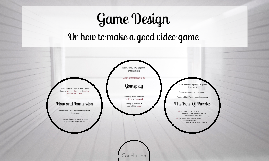 Transcript: Is enhanced by gameplay, atmosphere (virtual surroundings) and feedback elements Game Design Immersion: Three different types exist in videogames. Gameplay mustn't become repetitive or redundant Flow: State of a user in which they become very productive and tend to loose track of time Puzzles can serve a purpose in games of any genre. Gameplay must be at least a little varied DO: Fit the storyline and universe. Add something to the narrative aspect Add complexity to the game Or how to make a good video game Puzzles add a different type of gameplay Describes the type of interaction Conclusion The Role Of Puzzles Flow and Immersion Require the player to be immersed Gameplay DO NOT: Be used to make the game longer Slow down gameplay Not connected to game's universe 2 recommendations