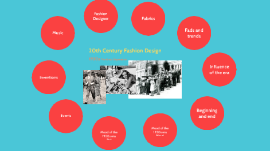 Transcript: 20th Century Fashion Design 1930s The Great Depression Modest and Feminine Modest and form-fitting Accentuated natural "high waist" Fitted hips Longer mid-calf or floor length hemline High neck line Wide shoulders Mood of the 1930s era (Women) Strong and Masculine Wide Fit Wide shoulders Narrow waist Full leg pants Padded shoulders Wide lapels Double-Breasted suits Mood of the 1930s era (Men) Events After the 1920s, many peoples prosperity's ended and the title of "The Great Depression" started, but during that time, there were other events that occurred that shaped the fashion world. The Great Depression Stock markets began to crash, which lead people to have only a little bit of money New material were used to replace the expensive materials Zippers were used to replace buttons The Great Depression Influences Influences The popularity of jazz music began to rise which influenced many fashion trends in the 1930s Popularity in sports also began to increase which lead to sports clothing to become popular Trends in art and industrial design is also a big impact in the fashion industry in the 1930s Icons Icons In ht e 1930s Hollywood movie starts were looked upon by many women. Greta Garbo, Marlene Dietrich, and Joan Crawford became one of Hollywoods first fashion icons. Inventions created in the 1930s Inventions 1934 -Trampoline- George Nissen and Larry Griswold 1938 -Ballpoint pen- Laszlo biro 1938 -Instant coffee- Nestle Popular Music/Musicians Music Jazz music and swing were very popular in the 1930s. People listened and danced to music during this time to forget about all the hardships during The Great Depression. Count Basie Orchestra Count Basie was an orchestra formed by William James (Count Basie) who was an American jazz pianist, organist, bandleader, and composer. Basie formed his own jazz orchestra called "Count Basie" in 1935. Count Basie Ella Fitzgerald Ella Fitzgerald Ella Fitzgerald had a troubled childhood which turned Fitzgerald to singing. Fitzgerald then debut in 1934 at Apollo Theater, where she began to rise as the top female jazz singer for decades. Benny Goodman Benny Goodman Benny Goodman lead one of the United States most popular musical groups. Goodman's band started careers of many jazz musicians. On January 16. 1938, Goodman held a concert in New York City at Carnegie Hall, which Bruce Eder named " The single most important jazz or popular music concert in history". Louis Armstrong Louis Armstrong Louis Armstrong was an Jazz trumpeter, bandleader, and singer. Armstrong's music had an important effect on jazz history, where many called him the first great jazz soloist. Ella Schiaparelli Fashion Designer Italian-born fashion designer, Schiaparelli established an important couture house in Paris. Schiaparelli was famous for her surrealist fashions of the 1930s and witty accessories, such as a telephone shaped purse. Madeleine Vionnet Madeleine Vionnet is best known for her elegant Grecian-style dresses and popularizing the bias cut in the fashion world, inspiring number of recent designers.Vionnet was called the "Queen of bias cut" and " The Architect among dressmakers". Madeleine Vionnet Popular fabrics Fabrics In the 1930s wool,silk,and rayon were the most popular fabrics. Furs were also popular such as mink,sable,Persian lamb, and silver fox fur. Wool wool Silk silk Rayon rayon Fads and trends of the 1930s Fads and trends British style handbags Furs Gloves Big hats Trousers Toupees (for men) Backless dresses Influence Influence of the era In the 1930s, fashion was heavily influenced by films, specifically Hollywood films. Stars seen on the screen such as Clark Gable, Jean Harlow, and Shirley Temple, created fashion trends for kids, women, and men. After the 1920s ended, the stock markets crashed which caused people to lose a lot of money. Near the end of the decade new technology and trends started to grow especially in the radios and films. Beginning and end 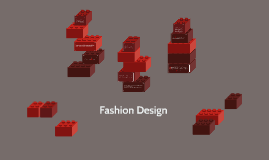 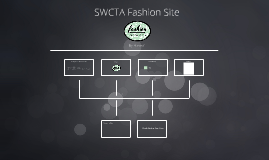 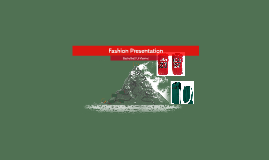 Transcript: SLAM DUNK! Thank you! Basketball Uniforms Why are the shirts sleeveless? Basketball Shorts Accessories Basketball Uniform is something people have started to wear in public or rap videos. The shirts are sleeveless to show off a player's muscle tone and so they don't trap in the heat and the player begins to get tired. In 1899, Basketball shorts started off as long trousers but then became medium length shorts by the 1920s. In the 1930s the materials changed. Basketball Shoes What are they made of? Fashion Presentation In 1903 Basketball Shoes with suction cups to reduce slippage were introduced and are still part of the official Uniform.Over the decades different brands and styles emerged such as Chuck Taylor All Stars and Keds. In the 1970s basketball players started to wear wrist, head, arm, bicep and ankle bands to wipe away sweat or show fashion statements. Basketball Uniforms were made of heavy wool but have changed to polyester and nylon.