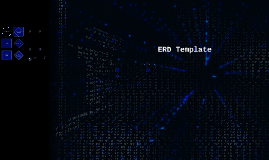 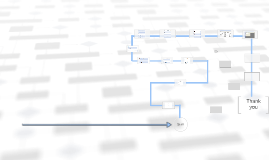 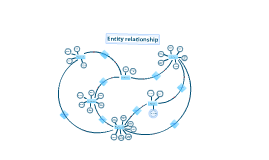 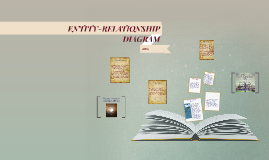 Transcript: (ERD) One instance of an entity (A) is associated with zero, one or many instances of another entity (B), but for one instance of entity B there is only one instance of entity A. For example, for a company with all employees working in one building, the building name (A) is associated with many different employees (B), but those employees all share the same singular association with entity A. An Entity Relationship Diagram is a graphical representation of an organization's data storage requirements. Entity relationship diagrams are abstractions of the real world which simplify the problem to be solved while retaining its essential features. In other words, entity relationship diagrams are graphical representations that illustrate the logical structure of databases. Relationship The relationship is the interaction between the entities. In the example above, the customer places an order, so the word "places" defines the relationship between that instance of a customer and the order or orders that they place. A relationship may be represented by a diamond shape, or more simply, by the line connecting the entities. In either case, verbs are used to label the relationships. 3. Many-to-Many one-to-one, expressed as 1:1; one-to-many, expressed as 1:M; and many-to-many, expressed as M:N. Cardinality 2. One-to-Many 1. One-to-One The three main cardinal relationships are: The steps involved in creating an ERD are: One instance of an entity (A) is associated with one other instance of another entity (B). For example, in a database of employees, each employee name (A) is associated with only one social security number (B). The three main components of an ERD are: Identify the data that must be captured, stored and retrieved in order to support the business activities performed by an organization; and Identify the data required to derive and report on the performance measures that an organization should be monitoring. ENTITY ENTITY-RELATIONSHIP DIAGRAM What are Entity Relationship Diagrams used for??? The entity is a person, object, place or event for which data is collected. For example, if you consider the information system for a business, entities would include not only customers, but the customer's address, and orders as well. The entity is represented by a rectangle and labeled with a singular noun. *Identify the entities. *Determine all significant interactions. *Analyze the nature of the interactions. *Draw the ERD One instance of an entity (A) is associated with one, zero or many instances of another entity (B), and one instance of entity B is associated with one, zero or many instances of entity A. For example, for a company in which all of its employees work on multiple projects, each instance of an employee (A) is associated with many instances of a project (B), and at the same time, each instance of a project (B) has multiple employees (A) associated with it. The cardinality defines the relationship between the entities in terms of numbers. An entity may be optional: for example, a sales rep could have no customers or could have one or many customers; or mandatory: for example, there must be at least one product listed in an order. There are several different types of cardinality notation; crow's foot notation, used here, is a common one. In crow's foot notation, a single bar indicates one, a double bar indicates one and only one (for example, a single instance of a product can only be stored in one warehouse), a circle indicates zero, and a crow's foot indicates many. ENTITY-RELATIONSHIP DIAGRAM 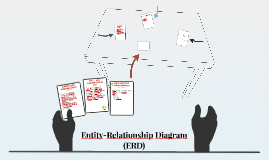 Transcript: Steps involved in creating an ERD include: Entity Relationship Diagram Components (Notations): ERD is a data modeling technique that graphically illustrates an information system’s entities and the relationships between those entities. An ERD is a conceptual and representational model of data used to represent the entity framework infrastructure.. 2-power designer. One-to-One One-to-Many Many-to-Many Identifying and defining the entities Determining all interactions between the entities Analyzing the nature of interactions/determining the cardinality of the relationships Creating the ERD Definition Entity-Relationship Diagram (ERD)? 5-ER Studio. Programs: Why are entity relationship diagrams used? Types of relationships: 3-Microsoft Visio. 1-Smart Draw. Entity Relation diagram (ERD) include three modeling objects: Entities. Attributes. Relationships. Entity Relationship (ER) diagrams are drawn when designing a database system. Data modelers create ER diagrams in order to fully understand and describe data before it is developed into a physical database. Entity-Relationship Diagram (ERD) 4-Oracle designer. 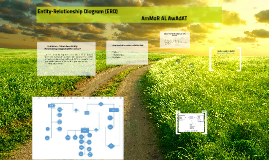 Transcript: Definition - What does Entity-Relationship Diagram (ERD) mean? Steps involved in creating an ERD include: Entities Relationships Attributes Microsoft Office Visio Professional is an office tool which is specialised on making diagrams easily for your projects. Microsoft Office Visio Professional offers powerful solutions for diagrams. Use it for your own personal projects or for professional reasons, it will be useful for explaining your thoughts and ideas. Identifying and defining the entities Determining all interactions between the entities Analyzing the nature of interactions/determining the cardinality of the relationships Creating the ERD Tools used to build Microsoft Office Visio Entity-Relationship Diagram (ERD) AmMaR AL AwAdAT An entity-relationship diagram (ERD) is a data modeling technique that graphically illustrates an information system’s entities and the relationships between those entities. An ERD is a conceptual and representational model of data used to represent the entity framework infrastructure. Steps involved in creating an ERD include: Use Case-Library System 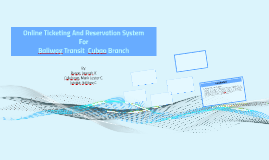 Transcript: Introduction 1.1 Background of the Problem Online ticketing and reservation system deals with maintenance of records of details of each passenger who had reserved a seat for a journey providing the ticket. It also includes maintenance of information like schedule and details of each bus. This system can be used by the customer using online reservation via internet for their personal or for all business purposes. The software provides bus transportation system, cancellation of seats and different types of enquiry which need an instant and quick reservation. Users can use this system directly on their websites and no need to install it. By: Ayson, Jannah V. Culubong, Mark Lester C. Jotojot, Jollibee C. Online Ticketing And Reservation System For Baliwag Transit Cubao Branch 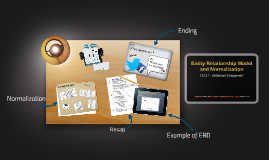 Transcript: NOTES #1: Table to be Normalized: The non-primary key attributes are not dependent on the primary key. Entity Relationship Modeling Normalization 3. Optional One 2. One-to-Many (1:N) -an approach to data modeling that was proposed by P. Chen in 1976. This divides the database into two parts: entities and relations. Table in the Second Normal Form (2NF) 5NF -It is also known as project-join normal form (PJ/NF). A table is said to be in the 5NF if and only if every non-trivial join dependency in it is implied by the candidate keys. Symbols: CS221 - Database Management Any questions? Thank you for listening! The functional dependencies have been removed. Relationship Cardinality: 1. One-to-One (1:1) 1. Mandatory One To eliminate the repeating groups, encode the needed values for the nulls/empty slots. The attributes must be fully functionally dependent on the primary key. Types of Relations: Table in Third Normal Form (3NF) Example of ERD 2. Mandatory Many -Attribute Ending Entity Relationship Model There are 6 normal forms. 6NF - In this work, the relational operators, such as join, are generalized to support a natural treatment of interval data, such as sequences of dates or moments in time. Cabaccang, Candor, Caneta, Daquipil, Matamis, Pontopedra, Roque, Rosell, Santiago, Torres Table in First Normal Form (1NF) Entity Relationship Model and Normalization Normalization Additional Information: Normalizing Table -a method of organizing data elements in a database into tables -Relation 4. Optional Many Any transitive dependencies have been removed. Entity Relationship Model Example 3. Many-to-Many (N:N) -gives emphasis on the data and is used for specifying databases Online Examination Recap 4NF - It was introduced by Ronald Fagin in 1977, is concerned with a more general type of dependency known as a multivalued dependency - Entity