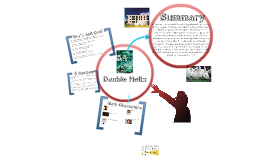 Transcript: Double Helix Summary Pro's and Con's Main Characters 5 Quotes Ava- Eli's HD positive mother Eli Samuels just turned 18 and just graduated high school. When he gets mad one night after finding something of his dad talking about Huntington's Disease which his mother has been suffering from most of his life, while upset he accidentally sends an email to Dr. Quincy Wyatt, the nobel prize winner and legendary molecular biologist. Soon after Eli is offered a job at Wyatt Transgenics. He gets good pay and Dr. Wyatt seems to like him, but why? Eli's girlfriend thinks its great he has a job! But his father is not happy at all. Why does his dad dislike Dr. Wyatt that much? what happened? Why is Dr. Wyatt so in terested in him? Eli- The main Character Dr. Wyatt- the man Eli works for Lets take a closer look at Huntingotn's Disease Vivian- Eli's girlfriend Pro- Eli gets a great job/career right out of high school Con- He probably won't end up going to college if he stays their Pro- He becomes friends with a great scientist Con- But is Dr. Wyatt insane? Pro- He's doing science the thing he loves Con- is this science all parctical? Pro- He is getting paid good Con- Is it worth your dad not liking you? Pro-Just because you can should you? Con- Bio-ethical issues of today come up in this reading Jonathan- Eli's dad 1. Dr. Wyatt says to Eli, "Do you have some kind of guilt at having done good in the gentic lottery?" 2. Eli reliezes there is something different with him and wants to be with his girlfriend and thinks "with her, I could pretend everything and everyone was normal." 3. Eli thinks back to when his mom was still a mom and remembers her saying how she knew Dr. Wyatt, "We used to know him, before you were born." 4. When Eli discovers the hidden elevator he wonders"Wasn't it a little peculiar, putting an elevator behind a regular office door? 5. once Kayla and Eli find Dr. Wyatt's secret data about kayla, it says "C-A-G, Repeats:59" which means she has HD anything over 29 repeats is positive. 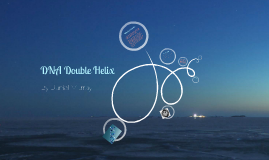 Transcript: Winning Formula Molecule of Life Photograph 51 Piecing the Puzzle Together http://www.nobelprize.org/educational/medicine/dna_double_helix/readmore.html http://campus.udayton.edu/~hume/DNA/DNA.htm http://ensemblestudiotheatre.org/about/past-productions/2010-2011/photograph-51/ http://www.forbes.com/sites/daviddisalvo/2011/11/22/whats-your-dna-worth/ "The instant I saw the picture, my mouth fell open and my pulse began to race." The first important piece of information came in 1952, when Rosalind Franklin and Maurice Wilkins used x-ray diffraction to understand the physical structure of the DNA molecule. The did this by shining x-rays on a sample of DNA. This enabled them to create a photographic film, called photograph 51, which showed an x in the centre of the molecule, indicating it was a helical structure. In 1953, James Watson determined the last needed piece of information; that the adenine-thymine bond was exactly as long as the cytosine-guanine bond. This allows each rung of the twisted ladder in the helix to be of equal length, and consequently, the sugar-phosphate backbone to be smooth. Using this information he compounded, in the journal Nature, our modern understanding of the DNA double helix. DNA is a winning formula for packaging genetic material. Therefore almost all organisms carry genetic information encapsulated as DNA. The first known isolation of DNA was by the Swiss physician Friedrich Miescher who, in 1869, discovered a microscopic substance in the pus of discarded surgical bandages. However Fredrich and many others brushed pass DNA as the holder of genetic material, regarding proteins as more important molecules. DNA Double Helix By Daniel Murray Shortly, after much investigation a molecule made from a sugar-phosphate backbone, with equal amounts of adenine and thymine and similarly equal amounts of guanine and cytosine, called DNA, was thought to be the molecule of life. However important information was still needed to establish a full picture. And They All Lived Happily Ever After The End 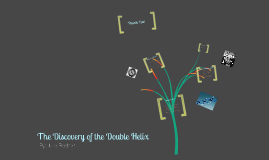 Transcript: The Discovery of the Double Helix What is DNA? - Also known as deoxyribonucleic acid. - It is a substance that transmits the genetic characteristics from one generation to the next. - DNA is used for classification; not all are alike! Statistics and Facts - Founded in 1952 by James Watson and Francis Crick. - The picture was a simple x-ray photo of DNA, clearly showing the three-dimensional 'double helix' structure. - 'double helix' also meaning 'double strands', strangely resembling two spiral staircases winding around themselves. Francis Crick and James Watson Francis Crick -British biologist -Born in Northampton, England on June 8th, 1916. -Attended University College in England -Soon after, he joined the Medical Research Council Unit at the Cavendish Laboratory. James Watson -American Biologist. -Born in Chicago, Illinois on April 6th, 1928. -He was recognized as a child prodigy. -Attended the University of Chicago at age 15 and graduated when he was 19. Looking Ahead The Human Genome Project -(1988-92): James Watson took over directing the multi-million dollar company. -It was created to decipher the chemical contents of human genes and open to research in a variety of physical and mental disorders caused by a mistake in the genetic code. And what purpose does it serve? In the world of DNA Thank You! and their life before the discovery By: Julia Bodnar about DNA 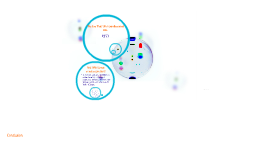 Transcript: Did DNA Create or solve a problem? DNA's discovery: The road to our understanding. Sparking peoples curiosity to know more about genetics. James Crick Francis Watson It did not create a problem, it solved one! DNA helped scientists understand how our bodies work and why we all look different. Connections 1953 photo (cc) Malte Sörensen @ flickr Discovery of DNA affected people at that time by... Conclusion In 19Th century, a German biochemist found nucleic acids. 1943 America Oswald Avery proved that DNA carries genetic information 1948 Linus Pauling discovered that many proteins take shape of an alpha helix, spiraled like a spring coil 1950 The race to discover DNA was on! 1951 Watson attended a lecture by Rosalind Franklin about DNA. Watson and Crick suggested the molecule was made of two chains of nucleotides each in a helix form 1962 Watson and Crick won the Nobel prize The time That DNA was discovered was.. 1st hour U.S history Ms. W.P Double Helix The Scientists involved were... By: Kristie & Stephanie The discovery of DNA is connected to Student today because is it still taught. Cites page! http://www.pbs.org/wgbh/aso/databank/entries/do53dn.html http://www.evi.com/q/what_year_was_dna_discovered http://science.yourdictionary.com/articles/who-discovered-dna.html 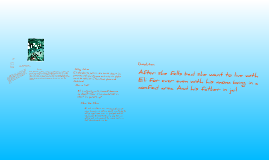 Transcript: Double Helix Eli Samuels is barely out of high school, he's offered a job at prestigious Wyatt Transgenics by Dr. Quincy Wyatt, the legendary molecular biologist. Characters Eli samuels Kayla Viv Eli's Father Dr. Quincy Eli's Mother Exposition Eli's mother and father knew Dr.Quincy in High school and something happened that his father didnt want to tell him at all while his mother wanted to tell him He's in the job offering in Dr.Quincy Wyatt's tiny, hot, but legendary work place. Climax Eli's girlfriend want to meet Eli's parents but Eli doesnt want to tell her about his horrible parents that will end up making them split apart. If he doesnt Viv thinks he doesnt trust her. But if he does he knows it will be hard for Viv. But Eli is also trying to figure out what happended to his mom and Dr. Quincy. Man vs. Self Eli is argueing with himself because he doesnt know if he should tell Viv about his parents yet. Man Vs. Man Eli and his father are having problems at home because his father wants him to go to college right now, since he just got out of highschool. Eli wants to help pay for his college and help around the house while he dad doesnt want him to. Falling Action Eli decides to tell Viv the truth about his parents and she figures out why he didnt want to tell her in the first place and feels bad Resolution After she fells bad she want to live with Eli for ever even with his mom being in a confied area. And his father in jail 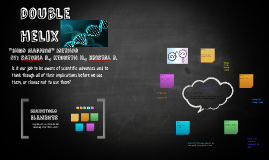 Transcript: double helix Is it our job to be aware of scientific advances and to think though all of their implications before we use them, or choose not to use them? Diseases Viruses Parasites Sickness Saving lives Giving chances Enhances the medication provided for the public Wide variety of genotypes and phenotypes Every genetic coding would be different Early Detection Early treatment. ELEMENTS by: satoria r., Kenneth H., kristal b. BRAINSTORM Genetic Research---Pros Genetic Research can be a big help to the human race. It can open so many doors to the future and solve so many problem. Main Idea copy and paste as needed and take advantage of an infinite canvas! "Mind Mapping" Method Pro #3 Better pharmaceuticals Pro #4 Increase genetic diversity Pro #1 Genetic Research can save so many lives Pro #2 Extend human life span Pro #5 Early detection in diseases 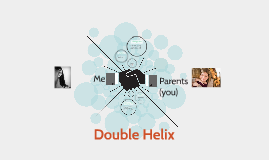 Transcript: *willing to pay all costs -piercing -all jewelery -care products *save up chores and "sponsor" money *was promised last summer *delayed until my birthday *delayed for "health" and safety suspicions *now we know its ok *only fair no delay this time *dance teachers have piercing and look great *they don't regret it *doesn't look worse with time (like tattoo *more toned down jewelery available Double Helix Different tastes 1 year of patience Uniqueness comes first *wanted since last year *was told to be patient *1 year is long enough to think *proves how determined I am Only Fair Expenses covered Looking good in the long run *my choice doesn't affect you *people like different things and I like this *like dying hair *not a big deal (only makes me happier) *worse things out there *happy I'm a good daughter *single cartilage too mainstream *one of the few with double helix *start revolution of self expression *nobody has it (appeals to unique factor) Parents (you) Me 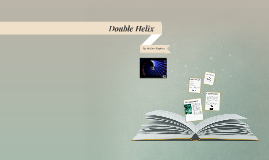 Transcript: By: Andrew Simpson 18 year old Eli Samuels who has just graduated high school is offered a job at the legendary Wyatt Transgenics Lab Eli sees nothing wrong with the job, but sense that his father does not approve As Eli works at the lab he begins to reveal the truth about the Samuel Family Final Comments Connections Plot Summary Likes vs Dislikes: Likes- Suspenseful Mystery Twists Dislikes- Unrelatable characters Overall, it was an interesting book with lots of mystery, suspense and plot twists. Thanks For Watching! Connects to the theme of "Identity" Eli begins to learn more and more about himself through his family's history Also connects to the theme of "Coming of Age" The job begins to help Eli become and adult A vital moment along Eli's journey that contributes to his self-discovery is when he finally learns the truth from Dr. Wyatt Double Helix