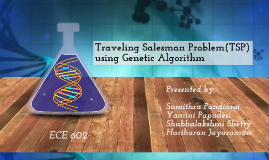 Transcript: For 23 cities, minimum distance is 1798.7 FUTURE WORK A number of genetic algorithm techniques have been analyzed and surveyed for solving TSP The research work can be extended for different hybrid selection, crossover and mutation operators Applications of GA include for advanced network models like logistic network, task scheduling models, vehicle navigation routing models etc. seed for the random number generator. Fixed - duplicate previous results CONCLUSIONS import city lists from XML files Special features: - Emphasizes combining information from good parents (crossover) - Many variants eg. reproduction models, operators Crossover Selects genes from parent chromosomes and generates new offspring Crossover point is chosen randomly On Solving Traveling Salesman Problems by Genetic Algorithms by Heinrich Braun no. of cities close by which greedy GA uses to link cities Chromosomes Representation (Encoding) of solution http://www-public.it-sudparis.eu/~gibson/Teaching/CSC4504/ReadingMaterial/Braun91.pdf percentage that each child after crossover will undergo mutation A Genetic Algorithm for solving Travelling Salesman Problem by Adewole Philip, Akinwale Adio Taofiki and Otunbanowo Kehinde Parameters: A search technique used in computing to find approximate solutions to optimization and search problems. - Global search heuristics - Uses crossover and mutation operators using the principle GA Approach Good solutions for various problem sizes; depends on: For a good solution, a trade-off must be made between run-time and the solution quality initial number of random tours GA OPERATORS - the way the problem is encoded - which crossover and mutation methods are used EXPERIMENTAL RESULT http://www.theprojectspot.com/tutorial-post/pplying a-genetic-algorithm-to-the-travelling-salesman-problem/5 Presented by, Sumithra Pandiaraj Yamini Papudesi Shubhalakshmi Shetty Hariharan Jayaraman Replace repeated city with nearest city Example Parent 1: F A B E C G D Developed: USA in the 1970s Typically applied to: Discrete optimization Attributed features: Good heuristic for combinatorial problems the no. of crossovers run before the algorithm is terminated GA Overview ECE 602 Performs a number of iterations, then the process is terminated and the best optimal tour is chosen. PROBLEM : You've got a number of cities to visit GIVEN : Distances between cities CONSTRAINTS : Visit every place exactly once Return to where you started OPTIMAL SOLUTION: Work out the shortest route HOW? GENETIC ALGORITHM EXAMPLE CASE percent chance the initial population will link to a nearby city Crossover Problem Parameters: Mutation Operation makes random, but small, changes to an encoded solution - all solutions into a local optimum - extends the search space of the algorithm Traveling Salesman Problem(TSP) using Genetic Algorithm http://thesai.org/Downloads/Volume2No1/Paper%204-A%20Genetic%20Algorithm%20for%20Solving%20Travelling%20Salesman%20Problem.pdf Number of cities = 23 Applying Genatic Algorithm for Travelling Salesman Problem Choose initial population Evaluate the fitness of each individual in the population Repeat Select best-ranking individuals to reproduce Breed new generation through cross over and mutation (Genetic Operation) and give birth to offspring Evaluate the individual fitness of the offspring Replace worst ranked part of population with offspring Until <terminating conditions> “Survival of the fittest” Optimal solution for different number of cities randomly placed “Traveling salesman is a busy man. So many places to go, so little time” REFERENCES GA Pseudo-Code GENETIC ALGORITHM To account that tour "A B C D E F G" is the same as "G F E D C B A", We can store the links in both directions for each tour. Population Size Mutation % Group Size Maximum Generations # Nearby cities Nearby city odds % Random Seed City list each generation, no. of tours randomly chosen from the population 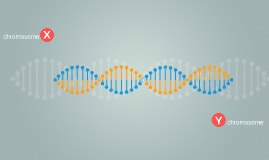 Transcript: DNA is a fragile molecule. About a thousand times a day, something happens to it to cause errors. This could include errors during transcription, damage from ultraviolet light, or any of a host of other activities. There are many repair mechanisms, but some damage isn't repaired. This means you carry mutations! Some of the mutations cause no harm, a few are helpful, while others can cause diseases, such as cancer. X chromosome HTTP://PREZIWORLD.COM Every human being shares 99% of their DNA with every other human. Even though it codes for all the information that makes up an organism, DNA is built using only four building blocks, the nucleotides adenine, guanine, thymine, and cytosine. Scientists at Cambridge University believe humans have DNA in common with the mud worm and that it is the closest invertebrate genetic relative to us. In other words, you have more in common, genetically speaking, with a mud worm than you do with a spider or octopus or cockroach. If you could type 60 words per minute, eight hours a day, it would take approximately 50 years to type the human genome. Y GET THIS TEMPLATE You have 98% of your DNA in common with a chimpanzee. chromosome A parent and child share 99.5% of the same DNA. If you put all the DNA molecules in your body end to end, the DNA would reach from the Earth to the Sun and back over 600 times (100 trillion times six feet divided by 92 million miles). Humans and cabbage share about 40-50% common DNA.