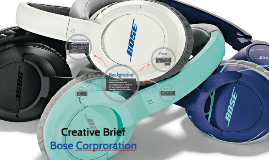 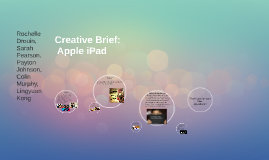 Transcript: Increase the traffic of our site by 5% in the next 12 months Creative Brief: Apple iPad Why? To date there have been 200 million iPads sold in the United States. An iPad is a very powerful tool to help children with technology, but too often that technology is used in a way that is not educational. We want to show young mothers that there is helpful technology that has education at it’s core. Who? Apple iPad. Discover how to make the most of technology in front of you. What? Why should people believe us? Thank you for your time. Questions? Mothers of children ages 3-7, who work full-time and have busy schedules. Children are learning how to use technology and the Internet at a younger and younger age. Parents are concerned with the overuse of technology at both school and home. They want their kids to use technology in a healthy way. What is main idea? Apple is a trusted, established brand, and consumers have calculative trust in them. This means that the trust the consumers have in the company is based on reputation. In a sense, the Apple iPad lets you explore, interact, play, and discover how the world works around you. Rochelle Drouin, Sarah Pearson, Payton Johnson, Colin Murphy, Lingyuan Kong What do we know? 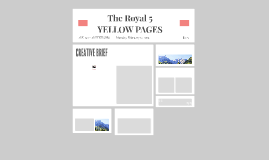 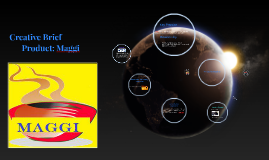 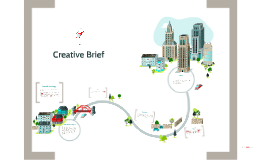 Transcript: Many student encounter problem with the ball point pen, is that their writing was being interrupted due to imprecise flow of the ink resulting to poor hand writing. Creating a hand gesture (hands beating the pen) manifesting the pen problem. Tone We want to use stop motion trend and the same time Wow factor. It is not for a TV commercial. We prefer to upload it on a facebook just making it a viral video. 30 secs video presentation with a use of Voice over and fast music beats following the ballpen flow of writing/sketching and detailing. Consumer's insight By the end of Video presentation, G-tech will be the most prefered ball pen of a college student. design by Dóri Sirály for Prezi Positioning Overall strategy Finding a niche in the prospect mind of a College student. Postion G-tech as any professions professional ballpen. Pag mag ka- college ka na, you get to choose the program that will sooner or later define your profession. Pag mag ka college ka na, you get to take it seriously what so ever your course is, because of the mindset that it is my profession. Target audience More anything to say about G-tech: Because it writes a 0.2mm line of pure vivid gel color without spreading the ink (Thanks to HIGH-TECH bio polymer ink) it improves your hand writing making it precise and professionally beautiful. “Ideal for any application, where fine, precise writing is required” also suitable for detailed illustrations, graphs and drawings. Object Incoming first year college who is tired of being interrupted with imprecise writing of their ball point pen. Mostly 16-17 years old. (“Master beaters”-Incoming 1st year out there that are expecting new set of ball pen experience in college) Prod. Praticulars We want to talk professionally, using English language as set of communication. Creative Brief 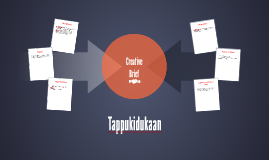 Transcript: Target Audience THANK YOU! Response and Tone of Voice Tappukidukaan is a gift shop based in Mumbai. They sell gifts that are unique and attract a unique audience. They provide with personalized gifts to people as well as are now targetting the market of corporate gifting The shop now wants to go online and are looking at increasing their awareness Tappukidukaan The response should be of a positive one since whatever the company is willing to provide is unique and not seen much before. Background Proposition 1. Its unique 2. It can attract a large audience 3. It may provide a good change to the usually boring gifting customs Reasons To Believe Creative Brief Tappukidukaan will provide a one time place for a varied range of unique gifts that cater to every customer's needs 1. Youth 2. High earning individuals (3 lakh + per annum) 3. MNCs 4. HR heads of various firms The purpose of this brief is to help the client in making the audience aware of its existence and establishing a web audience Purpose 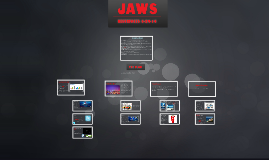 Transcript: Put in America's largest cities particularly ones which utilize public transportation Reaches a broad audience of working class individuals Middle aged, as well as young people - old and new viewers Culturally rich cities Creative Brief Social Media Campaign Shark swims across banner Theme music plays Facebook Fandango Movie Tickets.com Any other websites that are popular with the target audience -Targeting the “new” potential viewers who weren’t alive or who were too young to see Jaws when it premiered. -Social media is popular among the 15-35 age range. Summer is a popular season for alcoholic beverages - especially beer. By partnering with brands like Absolut and Corona, we'll target both of our audiences. This is especially crucial over Memorial Day weekend, when alcohol sales skyrocket. Bus Ads Why are we advertising? To stimulate ticket sales to the re-release of JAWS on June 20, 2013, 38 years after the movie’s original release date. Whom are we talking to? Two key demographics – the “original” viewers of the movie (people who saw JAWS in 1975) and “new” potential viewers (younger people born after the premiere), who enjoy thriller movies. What do they currently think? The original viewers remember JAWS and enjoyed it, but have long forgotten about it. They’d be open to seeing it again. The younger demographic doesn’t know much about JAWS, but would be interested if it appears to be a worthwhile film. What would we like them to think? Jaws is THE blockbuster to see this summer. It is an extremely rare opportunity to watch a classic American thriller film – and the only time it will ever be available in theaters. What is the single most persuasive idea we can convey? JAWS is a timeless classic with a “thrill” factor that has not been lost over time. Why should they believe it? Even though the movie was lost for so long, JAWS is an iconic film that Americans still remember – with a storyline and theme song that continue to instill fear. "Tracking the Great White" Social media/ online competition partnering with Travelocity increase online presence Win a trip to Martha's Vineyard where the movie was filmed In time for summer vacation planning Spotify and Pandora Reaching audiences in unique, memorable ways Banner Ad Product Placement Urban Advertising The original viewers remember JAWS a "Fish out of water" Place shark fins on top of taxis Banner ads with release date on side Coke As one of the most popular beverages in the country, Coca-Cola is an excellent way to advertise JAWS. Here, this Coca-Cola cup is subtly transformed by "water" line in place of the traditional white line. There is also an obvious white bite mark in the corner to catch consumers' eyes. Codes in bottle caps/ under labels to win movie tickets Taxi Ads As the re-release of JAWS approaches, summer is almost in full swing and temperatures increase around the country. As a result, our product placement strategy focuses primarily on beverages. Twitter Travelocity Campaign Create a twitter account to promote the movie. Use #jawsresurfaced when tweeting. Could possibly take the viewpoint of the Jaws or main character in Jaws. Placed on the sides of city buses Includes release date Made to look like the passengers are in the water Attention grabbing, but quick and direct with message Alcoholic Beverages Breaking News Campaign -30 Second Ads -Use Iconic Theme Music -Get stuck in people’s heads -Reaches the “new” potential viewers Special Campaigns Fake Shark Attack news story formatted like traditional news media Dissemination: Tweeted by news sources The Onion Entertainment Weekly Print Versions in Big Cities Put in newspaper boxes Inserts in NY Times, Post, Etc 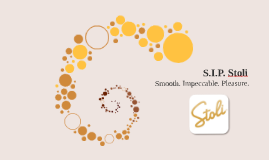 Transcript: S - Smooth I - Impeccable P - Pleasure Campaign Smooth. Impeccable. Pleasure. For the 30+ business oriented individuals, Stoli Premium Vodka is the brand of premium vodka that has classic style and is exceptionally smooth. Stoli uses a 500 year old distillation and filtration process, because classics can stand the test of time for a reason. S.I.P. Stoli Creative Brief S.I.P. Stoli