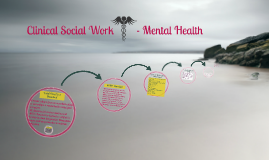 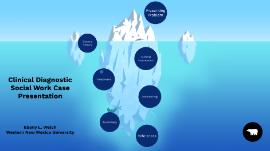 Transcript: Clinical Diagnostic Social Work Case Presentation Date 1 Ebony L. Welch Western New Mexico University Reason for Referral and Presenting Problem Presenting Problem Client: Cindy Woods Cindy presents with a history of suicidal and homicidal ideations, self-injurious behaviors, auditory hallucinations, delusions, disorganized thoughts, and substance use disorder. Per her medical records, she stated that "there are worms under her skin and people in the television who want to watch me die." She also states that voices are telling her to kill herself and others. Cindy was jailed and taken to the hospitals, emergency department, then transferred to an in-patient psychiatric facility for 30 days. Cindy was referred for individual psychotherapy, following the 30 days in-patient psychiatric hospitalization. Description of Client Client's History 54 year old Caucasian female 20+ years of Chronic Homelessness 2 Children (33y/o Jane & 35y/o John) Estranged from both children/ No support system Divorced from ex-husband Currently on Social Security Disability (SSDI) $800/m Methamphetamine and Cocaine dependency Disorganized thoughts/speech Cognitive functioning: low during psychosis Moderate cognitive functioning w/out psychosis Appearance: Appropriate. Although clothes are ill fitted Mood: Anxious Brief Pertinent Life History Brief Life History Cindy's family has a history of Severe mental illness (Schizophrenia) Childhood neglect and maltreatment Alcohol and substance abuse Cindy reports being homeless for more than 20 years after her home caught fire. She has stayed in temporary shelters and on the street. The client also reports intimate partner violence by her ex-husband for the extent of their marriage. The client reports extensive suicidal ideations and attempts due to hopelessness, isolation, and lack of resources. The client reports extensive legal history, with several arrest. Past Psychiatric History Past Psychiatric History The client has an extensive history of in-patient psychiatric hospitalization. She reports three in-patient psychiatric hospitalizations lasting 30 days or more, with the most recent admissions being May 2019 and early Jan 2020. In Jan, the client presented with self-injurious behaviors, auditory hallucinations, delusions, disorganized thoughts/speech. Per her medical records, Cindy stated that she harms herself "when it is necessary." On the Jan occasion, per her chart, when asked about her religious/spiritual beliefs she stated "I like to burn bibles." She also stated that "the worms under her skin multiply" when she takes her medication. Upon discharge in Feb 2020, the client followed up with Mental Health Mental Retardation (MHMR) Services, Risk Assessment Care Team (RACT), and MHMR respite for housing. Upon discharge she expressed that she wanted to continue to get well, so that she could get her social security card, state ID, and birth certificate to get an apartment. She also expressed getting healthy to reconnect with her two children. Past Medical History Chronic Obstructive Pulmonary Disease (COPD) Hypothyroidism Noncompliance with medication Clinical Impression of Concerns and Strengths Clinical Impression Axis I: 95.70 (F25.0) Schizoaffective Disorder, Bipolar Type; 304.40 (F15.20) Amphetamine-Type substance, Severe 304.20 (F15.20) Stimulant Use Disorder, Severe: Cocaine Axis II: None Axis III: COPD & Hypothyrodism Axis IV: Chronic homelessness, economic problems, no social support Axis V: Will assess The client's dual diagnosis of substance abuse and psychotic symptoms have gravely contributed to chronic homelessness, poor social support, and impairment in social skills. Strengths: Independent living Sense of humor Willingness to participate with treatment Clinical Impressions of Concerns and Strengths Clinical Impression Cont. Mental health disorders that can be ruled out Schizoaffective disorder depressive type Schizophrenia Delusional disorder The client best meets the criteria for schizoaffective disorder bipolar type rather than the other disorders. Further, Cindy may have a genetic predisposition of psychotic mental illnesses from her father. According to the American Psychiatric Association (2013) individuals who are most at risk for schizoaffective disorders are first degree relatives of those who have schizophrenia, schizoaffective disorders, and bipolar. Treatment Planning Treatment Intervention Approach: Cognitive Behavioral Therapy (CBT) Referrals MHMR Psychiatrist Substance Abuse Treatment program Narcotics Anonymous Workforce solutions (for life skills) Support Group for Severe mental illnesses Treatment Plan Cont. Treatment Plan Cont. Empirical evidence has linked Substance Use with psychotic disorders, specifically those on the schizophrenia spectrum (Nesvag et al., 2015). It is believed that mental health disorders such as schizoaffective have an influential affects on substance usage. Also, combination treatments such as antipsychotic, mood stabilizers, and 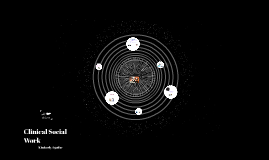 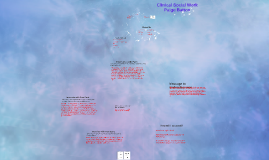 Transcript: Tools Utilized • Mental Health facilities • Private Practice • Schools • Government • Hospitals • Clinics/Agencies Interveiw with Pam Cont. • Social Security • Medical Insurance • 401K/403B • Pension • Disability • Vaction/Sick Leave • Develop Therapy plans and goals for each client. • Assist Clients with finding and accessing agencies (food, housing, etc.) • Work with insurance companies to get the best rates for clients. What do you like best about your career and what do you like least? How will I succeed? Will this career support my desired lifestyle? Describe your career (hours, Working conditions, Good & Bad features) Interview with Pam Washington (per year) 25%: $31,790 Median: $50,820 75%: $71,140 Opportunities for Growth I choose this career because I love helping people overcome difficult obstacles in their lives and help them find ways to better their well-being. In the next 10 years, the growth for Social Workers will grow by 19% for all branches of Social Work. "What I like best is working with people. I have a passion for doing that. What I like least is working with insurance companies and working with agencies and meeting with them. Agency is a pretty heavy load." Clinical Social Work Paige Batton What are some requirements of your career? (edu/training, degrees, certs, personal/physical) Yes, this career will definetly support my desired lifestyle. Message to Underclassmen • High School Diploma • Bachelor's Degree • Master's Degree in Social Work • Two years or 3,000 hours of post-master experience to become licensed. • Pass the state board exam for licensing. My message to all the underclassmen for the next years of their high school career is to start thinking about your future as soon as possible. Don't wait until the last minute when you have to give someone an answer. Have a rough draft of what you want to do even if you think you are going to change the plan at least you will have something to work off of. • Your Knowledge Basis • The documents and papers you use • Agencies • Computers Salary Benefits Why did I choose this Career? Interview with Pam Cont. "You will be better off with a Master's Degree in Social Work. I have a MSW with 37 years of experience. You will need to do 36 hours of Continuing Education Courses every 2 years. You can go to workshops too. Every 6 years, you need to go to suicide workshops. As for personal requirements, just stay on top of your own proccessing and stress levels. Physical excerise is a great idea also.'' •Graduate High School •Go to BC for 4 years to get a BA in Psychology •Go to EWU to go in to the School of Social Work program and get a MSW Professional Responsiblities Employment Outlook • Social Workers in general can advance to working as a program manager or assistance director. • Experienced Social Workers can teach or consult with others. •Some SW go into private practice. Growth in knowledge base. Education "In agencies, you usually will start around 8 or 9 in the morning and end the day around 4 or 5 in the evening. Working in Private Practice, there are flexible hours, no weekend work if you choose. One bad thing about Private Practice is that if there is a crisis, they are usually restricted to going to an agency rather than you. Also, you can work in a variety of different places if not private practice, but if you are then you can work at home if you wish". Locations for Jobs 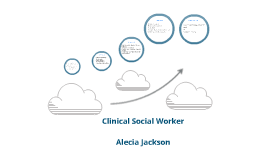 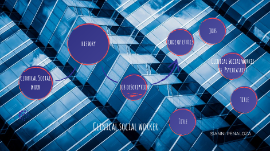 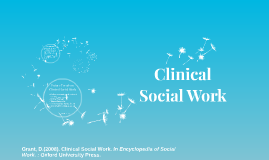