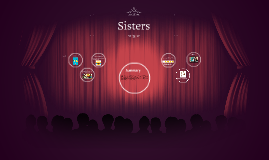 Transcript: Opinion Author- Raina Telgemeier Title- Sisters Genre- Fiction This book is not part of a series Why I choose this book Author, Title, Genre Raina can't wait to be a big sister. But once Amara is born, things aren't quite how she expected them to be. Their relationship doesn't improve much over the years, but when a baby brother enters the picture and later, something doesn't seem right between their parents, they realize they must figure out how to get along. Summary My Rating Thanks for listening Book Cover Have you ever went on a long road trip with your sister and you just can´t take her anymore after a few hours? Than this book is perfect for you. I choose this book because I think it´s a really funny book. In my opinion this is a really funny book that you should read. Video Sisters I said 4 stars because it wasen´t as funny and good as the others. 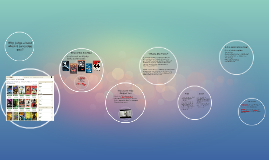 Transcript: Made by Thijs Biersteker Created as a prototype for the 2015 annual of the Art Directors Club Netherlands Why judge a book when it can judge you? Let's be real: we all judge books by their covers Mark Coker, Founder of Smashwords Diane Saarinen, Publicist for the Saima Agency Naomi Blackburn, Reviewer on Goodreads What's the Point? Cons Pros Limits accessibility Puts designers out of a job Is it even possible to bring this technology to a wide audience? We encounter enough jerks in our lives, why would we want to be judged by an inanimate object? Helps us encounter different/new types of literature Removes the bias of aesthetics Authors will only have to worry about their content Saves consumers from feeling embarrassed about what books they are buying (if they are not reading electronically) Where We Are Now I often worry about my skepticism and judgement getting in my way of amazement. Judgement should never hinder relentless enthusiasm of seeing things for the first time. The Huffington Post Drops Some Knowledge with Industry Professionals Is this going to be a thing? Works Cited The Cover That Judges You A prototype for the 2015 annual of the Art Directors Club Netherlands. A book full of great creative work that has been judged and awarded.That’s why I created a book cover that only unlocks when you approach it without any judgement. Rise in facial recognition technology Personal connection with the text Fascination with obtaining new technology Prototype/ art piece Visual culture Biersteker, Thijs. "The Cover That Judges You." The Cover That Judges You. Art Directors Club Netherlands, 2015. Web. 5 May 2015. Giuliano Long, Terry. "Yes, We Really Do Judge Books by Their Covers." The Huffington Post. TheHuffingtonPost.com, 30 May 2013. Web. 05 May 2015. 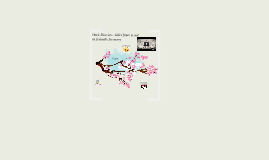 Transcript: Summary Opinion I choose this book because I love everything about this book, the drama is the main reason why I choose this book though. Not 3 stars.... I said 5 stars because this is a really good book to read Author, Title, Genre Author- Rachel Renee Russell Title- Dork Diaries- tales from a not so friendly frenemy Genre- Fiction This book is part of a series Not 4 stars.... Book Cover Dork Diaries- Tales from a not so friendly frenemy but 5 stars Thanks For Listening! Have you ever went to a school for a week with your worst enemy? If you have than this book is perfect for you. Not 1 star.... Why I choose this Book Not 2 stars.... My opinion is that everybody should read this book because it has drama, enemy's, and this a really good book for you to read. This book is about a girl named Nikki Maxwell who has to go to a different school for exchange week and goes to a school where her frenemy just transferred to. Can Nikki survive a whole week with the biggest drama queen ever? If you want to find out more, read the book. Reccomendation Series 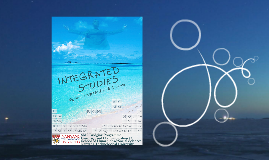 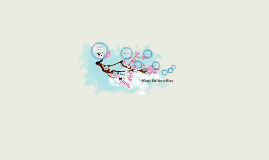 Transcript: I rate this book 5 golden stars because it is a page-turner and you cannot put it down. I recommend this book to all kinds of 5th graders. Hook Rating This book is about how a kid gets a part in a movie for diary of a wimpy kid, and he is Greg! Read more to find out. I chose this book because my mom got it for my on Christmas and I was DYING to read it. Author: Jeff Kinney Title: Wimpy Kid Movie Diary Genre: Fiction, Comedy, Humor This book is part of a series Do you like the diary of a wimpy kid series? Then this book for you. Other books by the same author Why I chose this book Author, title, genre, & more Book cover Wimpy Kid Movie Diary Recommendation All the diary of a wimpy kid series and much more I think this book is awesome and you can never put it down Opinion Summary 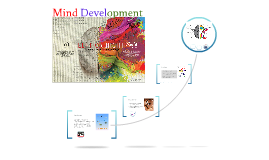 Transcript: Why problems need to refram? How problem can be reframed? When do we need to re fram problems Mind Map Paying attention Book cover Take a 30 minutes silent walk. Capture your observations in a "Mind Map" that you will share with the class. Reflect on why this type of focus is important for creativity. The power of paying attention The importance of active observation Seeing opportunities and solutions Are you paying attention? DESIGN THE COVER OF YOUR AUTOBIOGRAPHY: Include an image, the title, subtitle, and write a 200 word (or less) biography. This will be the way that you creatively introduce yourself to the other participants in the class. Mind Development Framing & Re-framing Problems Cartoonist Book Cover Design your own to reflect your mind

Transcript: Themes and Concepts Plot Summary Book Cover: Otherland, by Tad Williams Themes spying and investigation info hunt escape from confinement Concepts detected Virtual world and the struggles thereof Upbeat storyline with mysterious means Virtual reality/fighting bad computer Otherland, a quartet, by Tad Williams City Of Golden Shadow, River Of Blue Fire, Mountain Of Black Glass and Sea Of Silver Light First Published in December, 1995 Genre of this publication is fantasy, urban fantasy and science fiction Old Cover Summary of Series New Cover Felix Jongleur: The oldest person on earth, born before the outbreak of World War I, he is also one of the wealthiest and most powerful, and certainly one of the most ruthless. He is the leader of the Grail Brotherhood, and masterminded the creation of the Otherland system. Through much of the book, he appears in his preferred environment, a simulation of ancient Egypt, where, as Osiris, he presides over meetings of the Grail Brotherhood. Characters' influence on Design Elements in new Design When children from around the world fall a prey to a mysterious coma-inducing disease, somehow contracted while surfing the net, a group decides to end the reign of the "Grail brotherhood". Leaders of "The Net" are creating a means to live forever in an artificial reality by recreating themselves as living parts of an organic operating system. They can do this by means of utilizing the brains of the children to make the operating system function. The four books deal with the groups attempts to get into the system, their adventures while there, and finding a resolution to the problems created by the simulated world. Constantly aware of friction between virtual world and reality A passage to indicate leaving one world for another (travel) Door as symbol of passage Holy Grail - Drawing on Grail brotherhood, characters and their bloodthirsty pursuit to be immortal Connection between Holy Grail and Grail brotherhood Code (background) - symbol of virtual Hologram 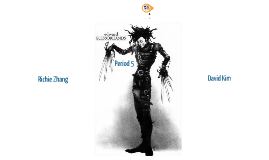 Transcript: Cutting Past the Cover Edward's face Actions in the Story The theme of Edward Scissorhands, is not to judge a book by it's cover, because the judgement will never be right. Kim sees past Edward's disability The camera contrasting Edward cutting the bush and the oblivious Dad Edward tries to save Kevin but it is perceived as trying to kill him At first Kim saw only his outer self j The movie portrays Edwards like a Creeper - Edward's props makes him look like a monster -Jim looks normal, but on the inside he is not normal -Peg and Kim see past Edward's outer self and into his inner self -Camera movement makes the Dad look oblivious, makes us laugh -Edward's actions are perceived as dangerous -Christmas music makes a allusion to Jesus Allusion to Jesus, how people prosecuted him, like Edward, but then came to like him when they got to know about him. Christmas is the birth of Jesus Peg understands Edward's inner side Mis en Sene One of the main ideas in the movie is: However, Bill, Peg's husband, does not notice anything, inside and outside Edwards Hands The people in the movie don't dig deeper, they see what is on top Makes fun of Dad David Kim The movie is saying, "don't do that" And looks like this on the inside "You will always be special to me" Then Kim sees how Edward is pretty and cool on the inside Period 5 Yet, he doesn't care about other people = = Edward's clothes Jim in the movie looks normal and nice Richie Zhang = So next time, resist the urge to judge instinctively and look deeper. The music in the movie sounds like Christmas music = Summary Don't judge a book by it's cover