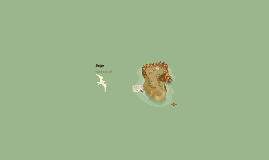 Transcript: Membership vs Prestige Goods Instinct & Survival Beige is seen in society today in: the mentally ill infants senile elders tribes untouched from society individuals under extreme stress. Thank you! Membership in Beige Society Membership goods unite a society, creating emotions and the possibility for cooperation Prestige goods can often unravel a society and create different emotions. The concept of commodities is passed down through generations. Beige in Today's Society Our ancestors formed survival groups to thrive They worked together, using their natural instincts to survive. Naturally formed into small groups Beige Prestige Goods in Today's Society Those who were lucky enough to evolve moved past the beige level but most peaked at this level of intelligence When natural disasters strike, people feel the need to fight each other for basic needs. During this time, supplies are limited and can often pull people apart. Prestige goods emerged if basic supplies were limited giving way to conflict and fear. Children who thrived into adulthood strengthened a group compared to other, less fortunate groups Beige thinking represents 0.1% of today's population We are all born with these natural instincts. Even today, humans must understand what it takes to survive without all modern technologies. Today Beige Prestige in Beige Society 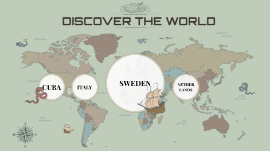 Transcript: DISCOVER THE WORLD CUBA CUBA CUBA TRINIDAD, CUBA Land LAND Vinales Valley More Havana, Cuba LAND More BEACH Cienfuegos Beaches Cayo Largo del Sur BEACH More ITALY ITALIA Amalfi Coast (Italian: Costiera Amalfitana) — stunningly beautiful rocky coastline, so popular that private cars are banned in the summer months. Venice (Italian: Venezia) — one of the most beautiful cities in Italy, known for its history, art, and of course its world-famous canals.\ Rome (Italian: Roma) — The Eternal City has shrugged off sacks and fascists, urban planning disasters and traffic snarls and is as impressive to the visitor now as two thousand years ago. Florence (Italian: Firenze) — the Renaissance city known for its architecture and art that had a major impact throughout the world. Naples (Italian: Napoli) — one of the oldest cities of the Western world, with a historic city centre that is a UNESCO World Heritage Site. ITALY SWEDEN SWEDEN STOCKHOLM Capital of Sweden Gothenburg, a major city in Sweden, is situated off the Göta älv river on the country's west coast. GOTHENBURG GOTHENBURG NETHERLANDS NETHERLANDS AMSTERDAM Netherlands’ capital, known for its artistic heritage, elaborate canal system and narrow houses with gabled facades, legacies of the city’s 17th-century Golden Age. 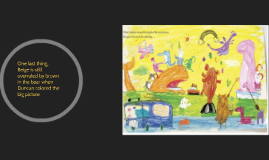 Transcript: Team Beige This presentation is on why Beige is the most under appreciated crayon Complex Sentence I never get used like a kid never draws a turkey or wheat. One last thing, Beige is still overruled by brown in the bear when Duncan colored the big picture One great reason why Beige, the under appreciated color, is the most underused is because all he is used for is turkey dinner {if he is lucky} and wheat. Although beige crayon never gets used, all the other crayons get used. Beige feels very sad because he does not want to be called " Light Brown", or "Dark Tan" because he is neither. Compound Sentence Simile Beige likes being appreciated, but rarely gets appreciated. Biege also feels like he is second in line to brown crayon. He thinks it is not fair that he gets all the bears, ponies etc.