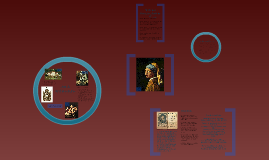 Transcript: Things to Look for in Baroque Art: Images are direct, and dramatic. Depictions feel physically and psychologically real. Emotionally intense. Extravagant settings and ornamentation. Dramatic use of color. Dramatic contrasts between light and dark, light and shadow. Baroque art has continuous overlapping of figures and elements. Common themes: grandiose visions, ecstasies and conversions, martyrdom and death, intense light, intense psychological moments. The "psychological pain of man" is often found to be in both art and architecture Baroque architecture is characterized by large, magnificent buildings, typically asymmetrical and flowing. The oval was usually employed. To Apollo chasing Daphne Ruddy silversmith from up on high, in whose bright beams the rabble pick their fleas: Daphne, that nymph, who takes off and won't speak, if you'd possess her, pay, and douse your light. If you want to save yourself the pain, oh, eye of heaven, try to buy her love: Mars for bonbons sold his coat of mail, and then his sword for jugs and sweet delights. Stodgy Jupiter became a purse; the maiden raised her skirt above her knees in showers of coins to catch him on the run. That was the doing of some duenna star, --a star without a duenna it can't be-- Phoebus, get her help, since you're the sun. Judith Slaying Holofernes by Artemisia Gentileschi The Ecstasy of St. Teresa by Gian Lorenzo Bernini Of Mans First Disobedience, and the Fruit of that Forbidden Tree, whose mortal tast brought Death into the World, and all our woe, with loss of Eden, till one greater Man restore us, and regain the blissful Seat, sing Heav'nly Muse, that on the secret top Of Oreb, or of Sinai, didst inspire That Shepherd, who first taught the chosen Seed, in the Beginning how the Heav'ns and Earth rose out of Chaos... Key Historical Events -Art & Architecture- Ludwigsburg Palace in Germany Literature Baroque literally means irregular. Baroque stylying became most popular after the counter-reformation, when Europe underwent a strong relitious change. Baroque style became popular in royal courts because it symbolized the power of the new monarchies. Baroque painting originated in Italy and spread north. The term Baroque also refers to a period of music that was during a slightly later time. THE BAROQUE ERA 1602 - Establishment of the Dutch East India Company: a very profitable company involved with the trading of spices . Lasted well into the 18th century. 1618-1648 - The Thirty Years War: a lenghty war that involved most of the countries in Europe at one point. This also marked the end of the Counter-Reformation. 1642 - Death of Galileo Galilei: accused of being a heratic for suggesting the idea of a heliocentric (sun centered) universe, he became a prisoner in his own home 1643-1715 - Reign of Louis XIV (the Sun King): he ruled for 72 years, starting at the age of four. "If it's not Baroque, don't fix it" Cogsworth Girl With a Pearl Earring by Jan Vermeer (1600-1750) The main purpose of Baroque literature was to move the reader with the strong emotions presented in the writing. Most of the works had religious themes (as exampled on the left, in "Paradise Lost" by John Milton. Metaphors were often used in Baroque literature, so much so the era became known for it in later decades. The Spanish became well known for their Baroque literature, with authors such as Francisco de Quevedo, who wrote "To Apollo chasing Daphne" on the right. Mythological references were often made in Baroque literature. 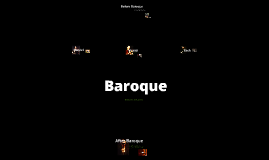 Transcript: By: Clare K, and Laurie G Before Baroque Music was very simple, and had no real emotion at all. The music that came in the baroque era was a little more complex, and used more different instruments. Violin especially. Baroque Vivaldi Italian Composer 1678-1741 ordained a priest, but spent most of his life composing for the students of Ospedale della Pietà Handel German composer 1685-1759 left law school to become a violinst started as on Opera composer, traveling in Italy and later England while in England he changed to composing oratios instead of Opera Handel's Messiah is still popular today Bach German composer 1685-1750 Wrote music very quickly, but much of it was thrown away he composed 1100 pieces- in every genre of Baroque music he was so important to the era that his death serves to mark the end of baroque music After Baroque The period after Baroque was named the Romanticism era, consisting of composers such as Mozart and Beethoven. This music evoked emotion and brought in some of the first instances of artistic clash. 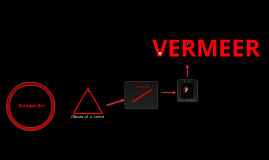 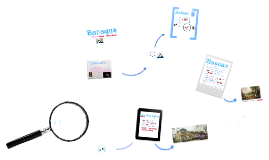 Transcript: Sophie van Wouwe & Daniek Teijema Information Born 1654 in Pieve di Soligo and died in 1726 in Pieve di Soligo Italian painter in the Rococo time England, Germany, and Austria baroque at this time (cc) photo by Metro Centric on Flickr Ascension of Jesus Christ (ceiling painting) Rococo We hope you enjoyed it • Extreme realism • Dramatical effects • Extreme light/dark contrasts • A lot of emotion • A lot of movement • calculated depth processing • diagonals Budapest San Francisco a baroque painting from Rembrandt Artists notes Rembrandt neo-baroque Notes characteristics 19th-20th century: baroque gets populair again: neo-baroque. most famous painter: Sybold van Ravensteyn Theatre Kunstmin. Stockholm Baroque The Embarkation for Cythera De nachtwacht (cc) photo by jimmyharris on Flickr (cc) photo by Franco Folini on Flickr golden century a lot of trading voyages of discovery Double click to crop it if necessary Rembrandt van Rijn The end Antonio Belluci after renaissance in 1600/1700 encouraged by the Roman Catholic church a rich, new style with wildly material used drama, tension, exuberance, and grandeur in sculpture, painting, literature, dance and music what happened at the time? Late baroque asymmetric, elegant, a sweet character. Soft tones are used as colours, and a lot of pastel Jean Antione Watteau: rococo style The Embarkation for Cythera: his most famous painting It depicts the island of Cythera, the birthplace of Venus the Goddess of love. It symbolizes the brevity of love. Place your own picture behind this frame! (cc) photo by Metro Centric on Flickr full name:Rembrandt Harmenszoon van Rijn Leiden 15 juli 1606 - Amsterdam 4 october 1669 Most famous painting: "De Nachtwacht" Painted in the baroque style In his paintings you can see the characteristics of the baroque style Thanks for listening VOC ship 'De Batavia' Important Details 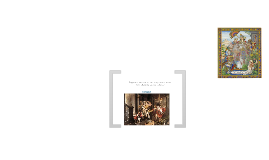 Transcript: baroque Exaggerated motion and clear the style started around 1600 in Rome,Italy spread to Europe. 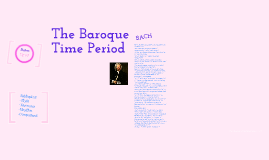 Transcript: Photo based on: 'horizon' by pierreyves @ flickr BACH The Baroque period came after the Renessaince and was followed by the Classical Era. The Baroque period started in 1600 and extended into 1760 The Baroque Time Period Subtopics -Style -Harmony -Rhythm -Composers Dates bach was born in Eisenach, Saxe-Eisenach, on 21 March 1685 was a German composer, organist, harpsichordist, violist, and violinist •father was Johann Ambrosious Bach director of town musicians father taught him to play violin and harpsichord uncles were all professional musicians Bach's mother died in 1694, and his father eight months later 10-year-old orphan moved in with his oldest brother Johann Christoph Bach age of 14, Bach, along with his older school friend George Erdmann, was awarded a choral scholarship to study at the prestigious St. Michael's School in Lüneburg in the Principality of Lüneburg In 1706 Bach was offered a post as organist at St. Blasius's in Mühlhausen, which he took up the following year less than a year Bach left Mühlhausen, returning to Weimar this time as organist and concertmaster at the ducal court Bach's position in Weimar marked the start of a sustained period of composing keyboard and orchestral works In 1723, Bach was appointed Cantor of the Thomasschule at St. Thomas Church (Thomaskirche) in Leipzig, as well as Director of Music in the principal churches in the town, namely the Nikolaikirche and the Paulinerkirche, the church of the University of Leipzig prestigious post which he held for 27 years until his death Bach's health declined in 1749; on 2 June, Heinrich von Brühl wrote to one of the Leipzig burgomasters to request that his music director, Gottlob Harrer, fill the post of Thomascantor and Director musices posts became increasingly blind, and the British eye surgeon John Taylor operated on Bach while visiting Leipzig in 1750. 28 July 1750 Bach died at the age of 65 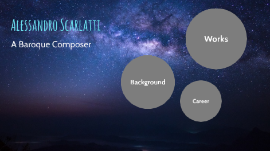