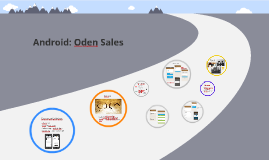 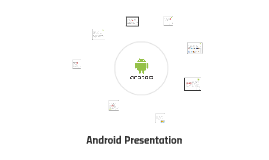 Transcript: Android Smart Watch Android Devices Applications Charts in this section provide breakdowns of Android versions, based on devices accessing Play Store as of September 9, 2014 Products Examples of android devices Platform usage HTC Dream, released on October 22, 2008 Applications are made in Java programming language using the Android software development kit (SDK) Debugger, software libraries, a handset emulator based on QEMU (Eclipse) Sony XP Z1 Applications can be acquired by users either through an app store such as Google Play or the Amazon Appstore (APK) As of July 2013, there are more than one million applications available for Android in Play Store HTC Pro 2 History Google TV Hardware In 2011, Google demonstrated "Android@Home" which uses Android to control a range of household devices including light switches, power sockets and thermostats Android uses Open Source code to develop and distribute their own modified versions of the operating system Manufacturers create a proprietary “skin” for Android that’s unique to their company Android, Inc. was founded in Palo Alto, California in October 2003 by Andy Rubin, Rich Miner , Nick Sears and Chris White Samsung S3 The main hardware platform for Android is the 32-bit ARMv7 architecture Google TV uses a special x86 version of Android As of November 2013, Android 4.4 recommends at least 512 MB of RAM Android began with “Android Alpha” in Nov, 2005. Commercially released in Sep, 2008 with the name Android 1.0 Android software iterations have been developed under a codename, released with the name of a dessert or sweet treat, and all in alphabetical order. Android Versions Swiping, tapping, pinching and reverse pinching OUYA Console Android allows it to be used on other electronics aside from smartphones and tablets, including laptops and netbooks, smartbooks, smart TVs (Android TV, Google TV) and cameras (E.g. Galaxy Camera). Open Source Devices The LED Light Bulb In 2010, Google launched its Nexus series of devices Based on direct manipulation using touch inputs HTC, Sony and Samsung running linux kernel version 2.6.25 Android Presentation MetaTrend’s Expresso Machine How are they made ? User Interface Sony XP Z Android Versions Skins 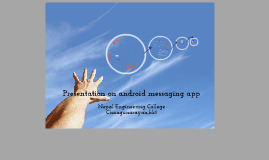 Transcript: android app in eclipse platform simple messaging app with user friendly interfaces Radio interface layer communicates between modem and android telephony. Android is open source OS and hence easy to develop full featured application java is independent and powerful object-oriented programming very cheaper app for text messaging than other app. To know the development of java application To know about working of RIL with modem To know about android OS and its telephony framework To create dual way data transfer between multiple android users. Android allows multitasking in the sense that multiple applications can run simultaneously. With Task Manager it is possible view all running tasks and to switch from one to another easily. Future inhancements About eclipse Redesign the layout to run on multiple sized platforms. Conclusion Upgrade to app and redesign functions to use the split screen features of the operating system RIL consists of vendor ril and ril deamon a mashup combines two or more services to create a appliction. Can create mashup using camera and android locations services to take picture with exact location displayed on image. android can run on many devices with different screen size and resolution.android come with tools that helps us to develop cross compatible applications.compatibility ensures that our apps can run on all devices. Each onRequest call should end with RIL_onRequestComplete. It is to send the response for the previous onRequest and to intimate we are ready for the next command. Refer ril.h for all the solicited commands Working of RIL This is the actual physical medium to transmit the data through general system for mobile communications. Fig 4:Sending and receiving SMS messages using the Android emulators Radio Interface Layer: It is the bridge between Android phone framework services and the hardware. In other words, it is the protocol stack for Telephone Multitasking The below fig shows the emulator to test the messaging application it contains message.java to send text and smsreceiver.java to receive that text file. Java file The fig shows final output of the project in virtual devices. All the telephony related applications like Dialer, Call tracker, SMS, MMS, GPRS, Antenna signal indicator and etc, will come into this section. these applications will be started during the android boot up. These applications will be tied up with the Android telephony framework services. Layout File Applications Statements of problem By clicking Send SMS button,the PhoneManager receives the intent. The above fig represents user interface to send text. RIL Nepal Engineering College Changunarayan,bkt Output RILD will be initialized during the Android system start up. It will read the system property to find which library has to be used for Vendor RIL, provide the appropriate input for vendor RIL and finally calls RIL_Init function of Vendor RIL to map all the Vendor RIL functions to the upper layer. Each vendor RIL has RIL_Init function. Vendor RIL It is a library specific to each modem. In other words, we can call it as a driver to function the modem. The RIL daemon will call the RIL_Init function with the device location . The RIL consist of two primary components. RIL Daemon Vendor RIL Mashup Capability By clicking send button,if the variable have not zero value then it invokes send sms function and simply sms is transmitted. Time to market Due to cross-compatibility reason When first activity is created,the variable sendsms,phone no and message(actually a part of main layout)gets some values. Modem Open Source Presentation on android messaging app These are the commands initiated from the modem to the upper layer. Like, Receive Call /Receive SMS are the commands. The Vendor RIL has to continuously monitor the device for unsolicited command from the modem. Why Android it contains activity main layout.xml and display.xml file.This is upper layer of telephony protocal stack. Solicited Commands :These are commands initiated from the upper layer. Like, Dialing/Send SMS are the solicited commands from the upper layer to the RIL. OnRequests the function for sending the solicited commands from the upper layer. Fig 3:Selecting an emulator/device to deploy the application Block Diagram Objectives Introduction 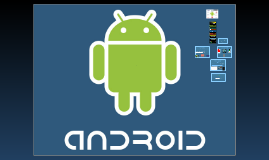 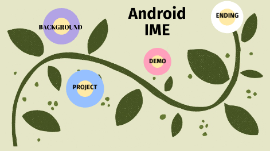 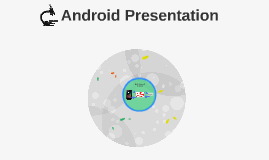 Transcript: The Activity Return Displays what the activity tells it to do Tells the activity what to do If not possible tells activity to show error Recieves what the layout wants to do Tells device what to show The Android Device The Layout Layout Main frame of Android The Activity Recieves what user inputs sends to layout "Asks layout what to do" The Layout Return Contains all the information "instructons" User Controls The device Contains the GUI The Device Return Android Presentation 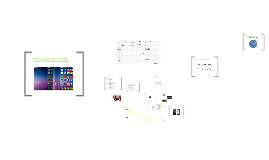